Railroad crossing, look out for the cars......

Luke and Kimber (Kaybi's kids) are on Spring break or something for a week.
Soooo....a field trip the the Golden Spike National Historical Monument is in order.

It is a RAINY day! My windshield wipers were on for the entire 95 miles to the Monument, but as we arrive in the parking lot I'm able to turn them off...  Nice!

The friendly and helpful Rangers give the kids a map/treasure hunt booklet, and let us use a golden spike for this photo. 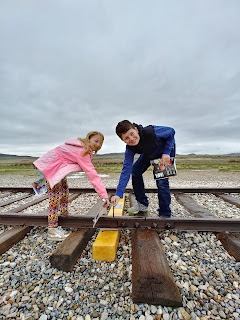 The Golden Spike was driven at this location (Promontory Point) May 10 1869 completing the first transcontinental railroad across the U.S.
Mr. Leland Stanford (rich guy) who later funded much of ....you guessed it, Stanford University. Was the designated celebrity spike driver...
Anyway, Mr. Standford swung the huge hammer and missed the spike on his first try, but he was eventually able to tap it into its pre-drilled hole, and, being 75% gold, it was then promptly removed and put in a safe place
The actual spike that linked the east-west lines was a normal everyday iron spike that was pounded in by an Irish laborer named Wilde McHamrr, and holding the spike was a Chinese laborer named, Hu duc Faste...

As the tourist season had not yet started, the two replicas of the trains that met on that historic day were not on display yet, but still housed in their garage. We were able to go in and see them and get a couple pix.

From the west side, California being California sent a gayly colored engine name Jupiter. From the east side they sent boring Engine 119, festooned with the typical black and soot of the day. 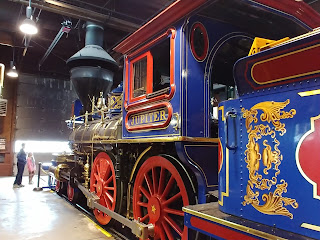 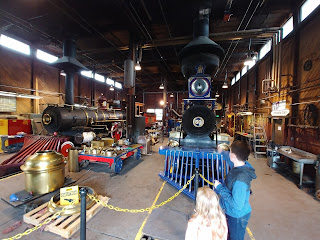 After that we drove another 18 miles to see the Spiral Jetty.
The Spiral Jetty is an earthwork sculpture by Robert Smithson, and considered to be his most important work.
It was completed in 1970 at this site chosen partially because of the salt water resistant algae that lives here and makes the water blood red. The Jetty is 1500 feet long and made of basalt rocks. 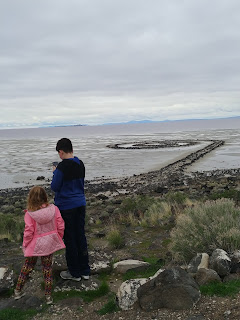 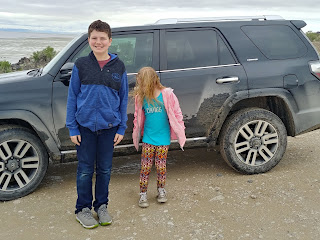 Next up for us is the Thiokol rocket garden. 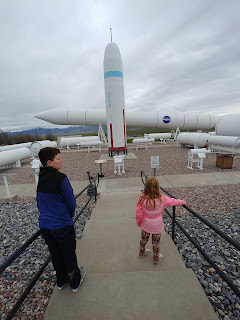 Luke does his "Shuttle Booster before launch" routine, while Kimber shows us her 'rocket dance'... 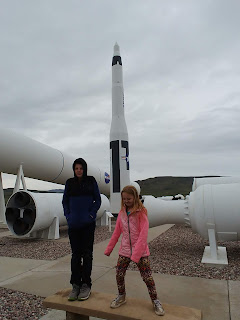 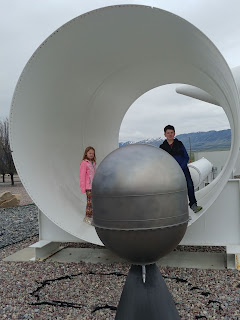 A stop at the Golden Spike cafe where the lady at the counter compliments the kids on how polite they are. "Good parentage" I reply. "And I'll bet good grand-parentage too" she says.
Well....who am I to disagree?? 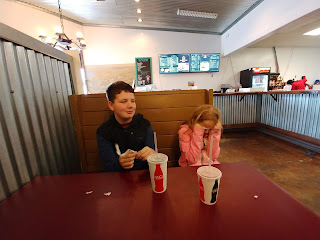 Cool stop. I’ve always wanted to stop at both places. The golden spike and Morton Thiokol.

Richard - They are both kind of remote...part of what makes them fun! I hope you enjoyed your trip down here.

Great trip report. You found some really cool places to take the kids. Did they sleep all the way home?

Trobairitz - Most of the way! :D