Bev and I invite three of our grandchildren, Luke & Addi, both 11 and Kimber 8 to join us for a 3 day trip to Mesa Verde National Park, an 800 mile (round trip) drive.

We have 12.5 Grand - Kids but the others are either to busy or to young to go with us. Plus, we only have room for five in the car. Of course I could ride the bike and that would open one seat in the car....two if any of the mothers would allow their child on the bike with me.....

We make a rest stop at Helper, Utah.
Helper got it's name when, in days of yore, as the coal trains would travel north from the mines near Price, they would stop at the Helper station to add another engine to Help the train up the next (steeper) hill. 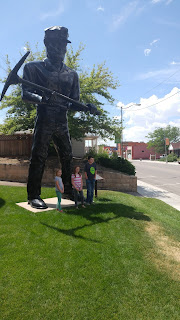 Then on to Green River for a gas and rest stop....and two photo ops.
The Golden Ratio sculpture. 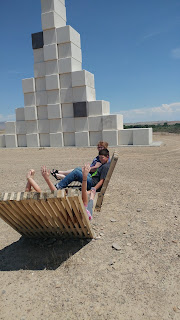 And a LARGE watermelon slice.
Green River is known far and wide for the delicious melons they produce.
This particular one however had a bit of a woody texture... 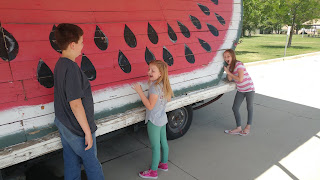 We have a reservation in Cortez, Colorado,
and after a nights rest, we are off in the morning to Mesa Verde for our tour of Balcony House.

To get to Balcony House, you need to climb up this 32 foot ladder.
Two of our group conquered their fears by going up this ladder.
Well done! 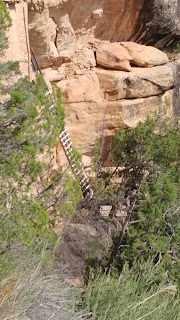 At one of the 4 balconies of Balcony House. 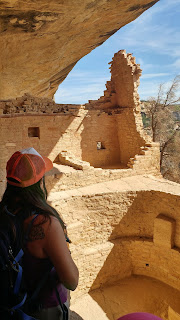 One of the tiny holes we all needed to climb through to get out of Balcony House (see the tiny speck of light in the dark area?) Not shown is the 12 feet between tiny holes that one had to crawl through. 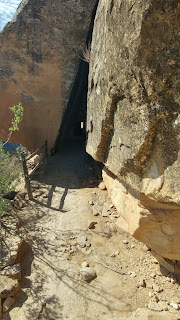 And the climb up the rock to get back to the road. 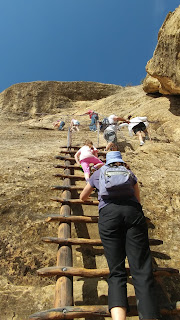 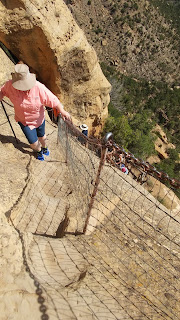 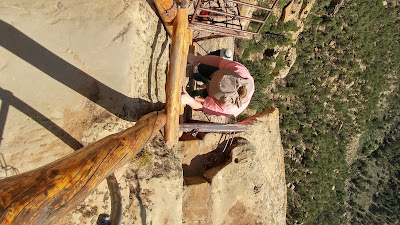 On our way out of the park....everyone (including Kimber) enjoyed themselves! 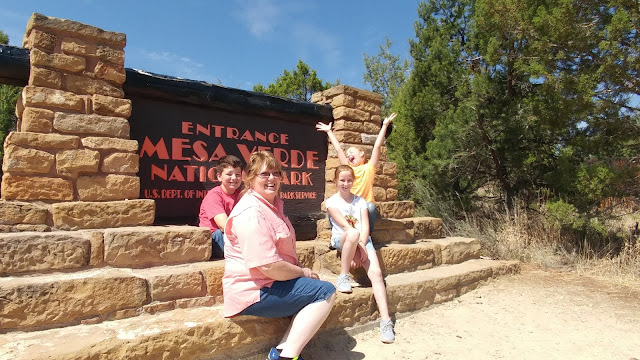 After our arduous exploration of Balcony House, we rewarded ourselves with a shake (first) and then a sensible lunch....they are with grandparents after all. 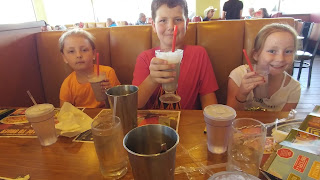 Some cute woodworking for sale in Cortez.
(not enough room in the car for this piece) 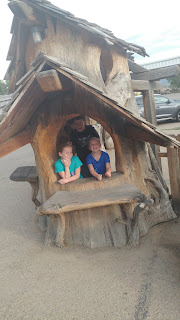 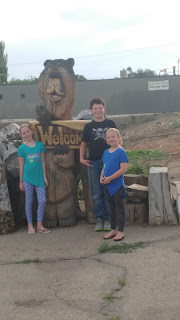 And then back on the road making our way home. The kids were wonderful and so much fun, this grand-parenting thing is a piece of cake!
Posted by Ken at 6:24 PM 2 comments: Don, aka nvr2old and I are set to meet in Gardiner, Montana to scout out potential locations for next years Cache Rally.
We agree to meet on Saturday and have reservations in place.....but Friday morning I'm up and out the door. Not until I try to check in at the Yellowstone RV park (after a 475 mile ride) do I realize I'm a day early!
No big deal, I had a great ride and Don will show up tomorrow.
Also, the RV park had a cancellation so I had a place to pitch my tent....right next to the Yellowstone river...very nice! 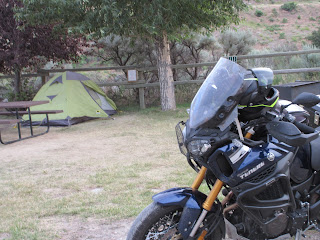 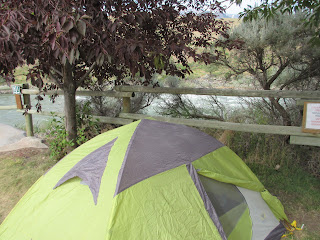 Saturday, before Don arrives I take a leisurely ride through the park, and find this back road.... 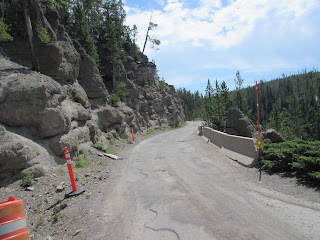 Another view of the same road. 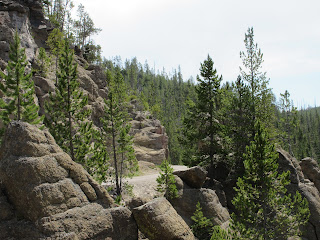 I think this cliff is near Roosevelt Canyon.. 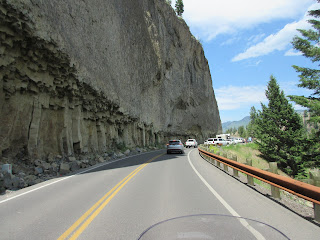 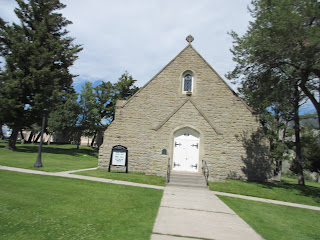 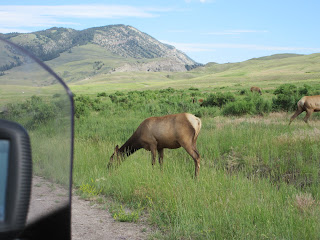 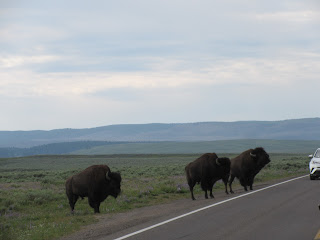 When Don arrives we ride to Mammoth hot springs...which are much less spectacular than they were a few years ago...maybe they'll come around again in a while. 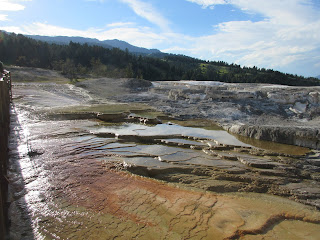 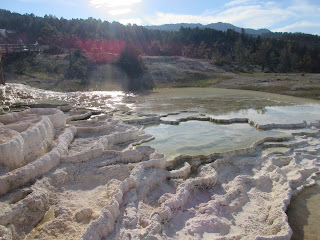 Then we grab a Subway for dinner, and after walk outside and look across the Yellowstone river at Gardiner. 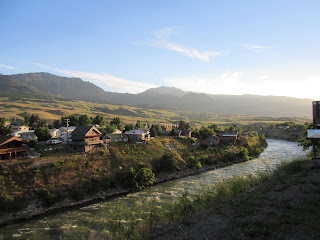 And looking the other way. 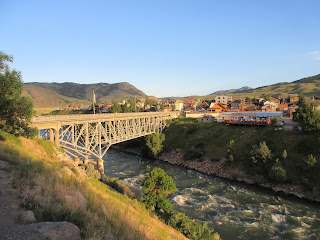 I over did it a little with three pictures of Roosevelt arch in this post, but this one makes me think of a distant portal that leads into another world...plus the bugs on my windscreen really make this picture work!
I'm hanging back a ways to see what happens to Don when he goes through the portal.... 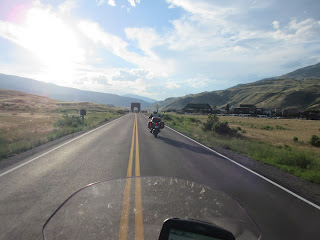 The Roosevelt Arch was built in 1903, it took about 7 months and 10 Grand to build this triumphal Arch. President Theodore Roosevelt laid the cornerstone to start the construction.
Bully! 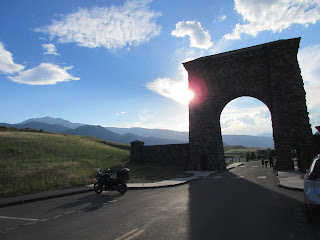 See you next time...

Don on the left, me on right. 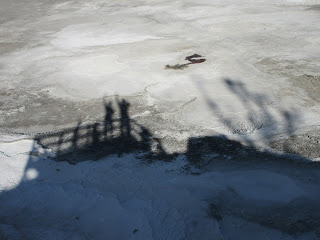 (I'm still undecided as to where the rally will
be... maybe another trip is in order..) 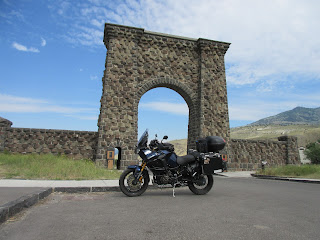