I'm suffering from PMS, which as all motorcyclists know stands for "Parked Motorcycle Syndrome"...yep I've got it bad. Maybe even worse than I had realized, because when I mention to Bev that I'm thinking about going south for a ride, she immediately says "Yes! You should go and have fun...."    (hmmmmmm)

So ok that's settled. The only place I can get a condo that is near enough for my time frame is Lake Havasu, so just like that everything is settled and waiting for me to go.

Bev says, "It might be bad weather, I wish you would trailer down".  So I get the trailer ready and sure enough the morning of my departure there was 3 inches of snow on the roads.... whew! So I have a warm and comfy 571 mile drive to Havasu.

I had put a post on the Tenere site asking if anyone in that area wants to do lunch. Garry (who winters in Arizona) gives a positive reply.  Garry and I did the same thing last year in Tombstone, Arizona.

Sweet! We'll meet in Why, Arizona 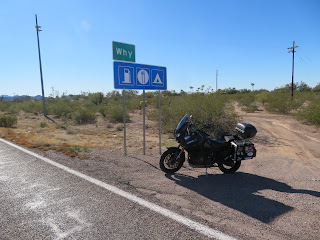 Garry and this guy were waiting for me when I arrived. Garry had beat me there by about a minute...pretty funny that we arrive a minute apart when you consider the distance we rode to get there. 250 miles for me and 160ish for Garry. 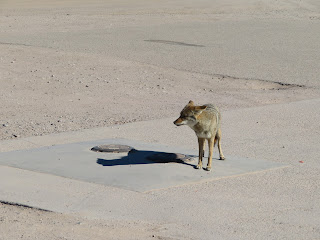 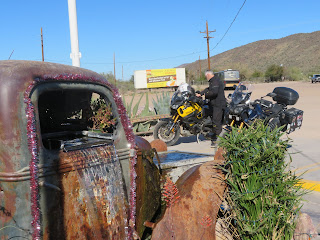 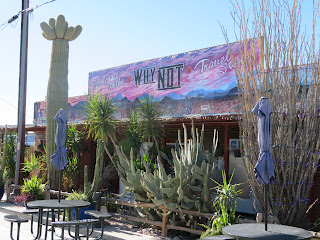 The white building in the back is Grannymacs kitchen where we ate. 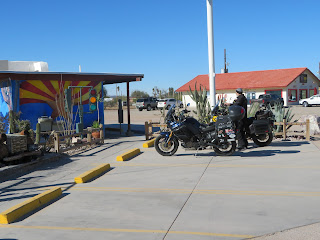 The next day I take a short ride around Lake Havasu and onto the island. 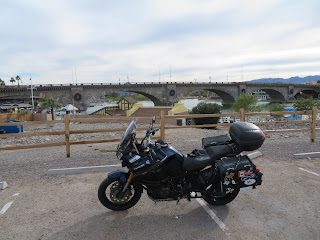 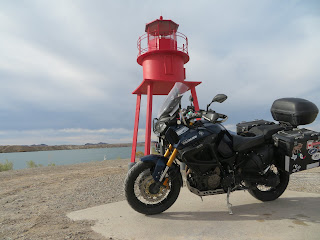 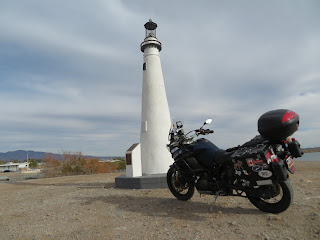 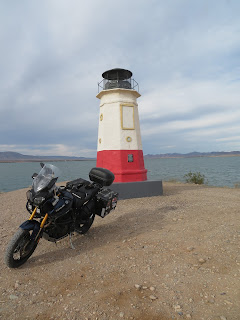 Next day I ride to Oatman to do some Christmas shopping...and have good success finding a couple gifts. 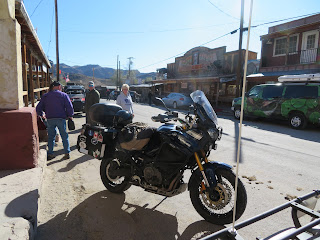 Then on the awesome road that goes to Cool Springs (RT 66) and stop at the equally cool museum for a cool drink! 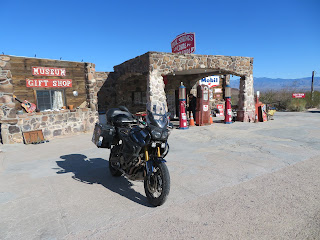 I spot this shiny thing as I'm riding toward Cool Springs. It is a ways off the road and looks like a memorial to someone's departed friend or family. It is kind of different, but loaded with personality. RIP whoever you are. 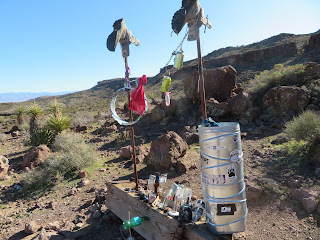 And its time to go home.
I pack my stuff and load the bike on the trailer and make the 571 mile drive home.
This was a good trip, and Thanks Bev for 'making' me take the trailer!
Posted by Ken at 10:11 PM No comments: