Ohhh the weather outside is frightful....

One of the moto forums I frequent is the My2Wheels group. Most of the folks on that forum are in the Las Vegas area and a goodly number of them are dirt riders. But they welcome all types bikes and riders and are a good bunch to be around.
So when a Christmas party and white elephant gift exchange was announced I thought it would be a good opportunity for a ride.
The first thing I did was check the forecast and the weather was reasonable (cold, but dry) on the day I would be riding down and the day I planned to ride home. Sweet! This is all working out.

Beverly gives me the 'ok' to go but for some reason declines my offer to come along ...
Now all I had to do was pack the bike and go.

Its 420 super slab miles from my house to Sin city, but this time I decide to stop in St George (300 miles) for a couple days instead of riding straight through. I arrive at my lodging late Thursday and plan to do some riding, and maybe visiting some old friends Friday, but when I wake up I'm feeling a bit under the weather so I spend the entire day cooped up in my room...
Saturday morning I feel somewhat better and get on the bike at around 10 am.

Obviously its a very short ride from St George to Vegas (118 miles), so when I leave the condo Saturday morning I have a couple places in mind to visit. 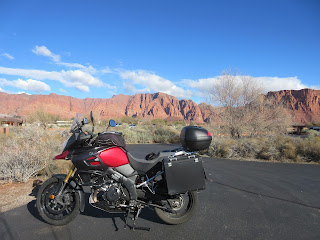 The first is The Coyote Gulch Art Village in Kayenta, Utah - a few miles outside of St George. Kayenta is a little off the beaten path, but the Art Village has a TON of cool and eclectic art to look at and of course purchase if you choose.
The wind sculptures in this picture are made a few hundred yards behind where I'm standing to take this picture. 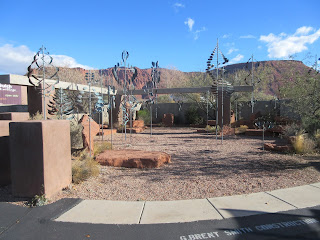 Its been a hard winter, these horses are stick thin! 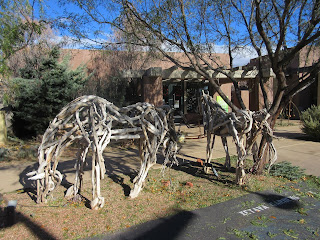 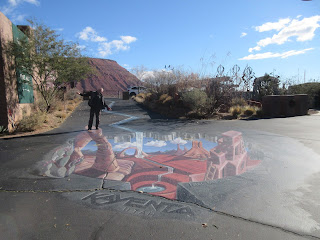 I thoroughly enjoyed my time browsing the art village, but its time to move on. 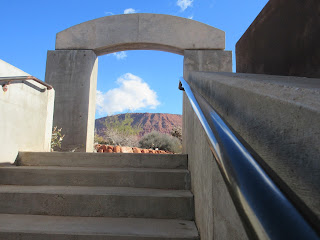 This tiny town was not a part of my plans, in fact I didn't know it existed until I saw this sign. But 17 miles of dirt road to a remote town sounded like fun so off I went. 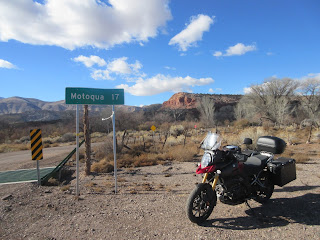 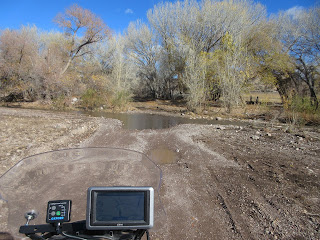 Beautiful scenery along the way. 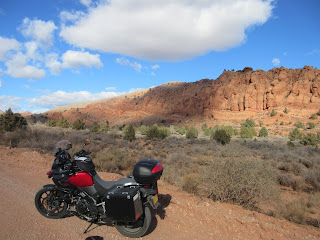 And in the distance you can see the 'town'.
Just outside of the town I stopped and had a very nice chat with one of the residents. He gave me the rundown on what roads were impassable due to the recent storm, and told me to come back in the Spring and he would show me around.
Small towns and friendly people...gotta love em! 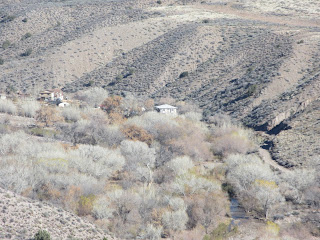 Back on pavement again I come across this swimming hole... A bit cold for a dip today, but it looked like fun. Look close and see the rope swing. 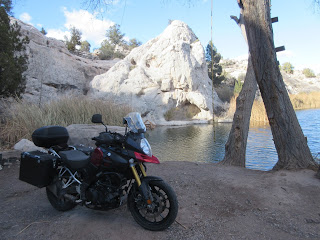 I make it to Vegas by 4:30 and had time to clean up before the Christmas party.

What a fun group of people!
The guy in the green sweater (Steve aka Desert Dweller) brought his Dad (white shirt) who was celebrating his 81st birthday.
It was a nice evening and fun to connect faces with some of the posters in the forum. 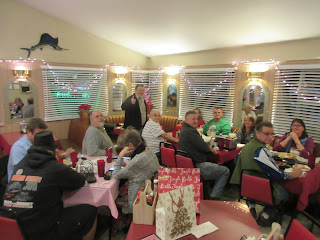 I felt bad that I didn't have a cool sweater! 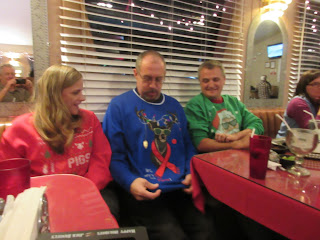 Sunday morning, and once again I'm feeling under the weather. But this time its a gout attack. It gets worse as the day goes on but in the afternoon I go for a short ride out to Pahrump.

Its a good thing I'm not old enough to patronize these places.... 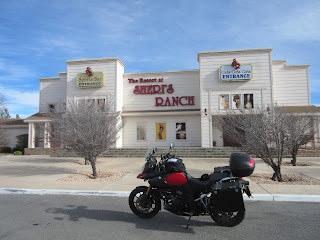 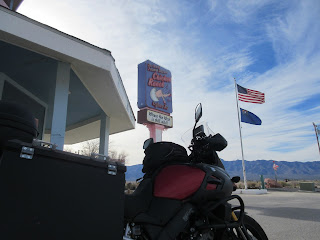 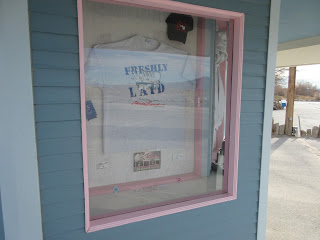 Back to the condo and the gout continues to worsen, I can't sleep or even relax due to the pain. Finally a little after midnight I get on the bike and ride to a 24 hour grocery store where I buy some home remedy - cranberry juice. I drink a half gallon and sure enough about 4 am I'm finally able to get to sleep.

Its Monday morning, time to head for home; my plan is to ride the 420 miles straight through, stopping only for gas. I limp slooooooowly out to the bike and leave Vegas at 7:30 am.
I was able to go about 175 miles on the super slab when I run into a surprise (and nasty!) snow storm!

In the distance of about 1/4 mile I go from cruising at 75mph on a mostly dry road  to a terrified 25mph in a raging storm and snow/slush covered road. I'm a mile or maybe two from the next exit and extremely worried about cars that are coming up from behind me.  After winding my way through some cars that had slid into the guard rail, or into each other I look ahead and see two UDOT snow plows trying to make a U-turn onto my side of the road. The first one pulls out in front of me, and I'm hoping the second will do the same as I really didn't want to be in front of the snow plows...but the second truck waits until I get past him then he pulls onto the road. I am now a motorcycle sandwich between two big snowplows on an extremely slick road....dang it all!

Both plows have a front blade and another blade on the side of the truck that deploys and retracts as needed. The plow behind me had both plows down, but the one in front has his side plow retracted. I'm not certain if he can see me in his mirrors so I don't want to get close to him in case he deploys the blade and I get smashed.. We are all going around 25mph.

It takes me a minute but then I realize that he is waiting for me to pass him...at least that's what I concluded as he was driving far slower than plows usually drive. So I take a deep breath and speed up as much as I dared and go past him as wide as possible on the right, which wasn't very wide as I was forced to ride in the tire tracks that the semi far ahead of me had left. That's when I figured out that the two drivers were likely communicating via radio, and they wanted me past them so they could block cars from coming up on me until I could exit the freeway. As soon as I passed him he lowered his side blade (they look a lot bigger from the front..). I finally reached the exit and as I moved off the freeway the first plow driver came abreast of me and gave me a friendly wave.
Thank you to both the plow drivers for watching out for me!

Once I was off the exit, it was obvious that continuing my ride home wasn't an option so I rode (read: slid) to the nearest motel and got a room for the night and then after a series of phone calls I discover the updated  forecast calls for more snow and then freezing temps for the next few days. So a plan is hatched for my son Fenton to drive down the next day with the haul trailer and give me a ride home on  what turned out to be icy roads.

Another huge Thanks to Fenton for rescuing me. 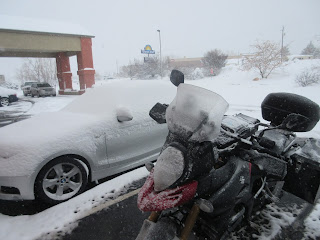 The My2Wheels party was a load of fun, and I enjoyed the ride home with Fenton, but other than that this was a crappy 890 mile ride, however.....at least it was a ride. And with out the help of friends I haven't met (the plow drivers) and family rescuers it could have been soooo much worse!

Wintertime rides....sometimes its a miserable way to scratch the itch...