Out for a Saturday ride with no real destination. I wind up by the town of Vernon and start following dirt roads to ...who knows where? Total dirt riding for the day was around 35 miles, more than enough for me.
I forgot my camera so these are taken with my cell phone cam.

The Black Rock Canyon road.
While I was stopped here a guy in a Toyota FJ crawled around me and kept going up the hill. 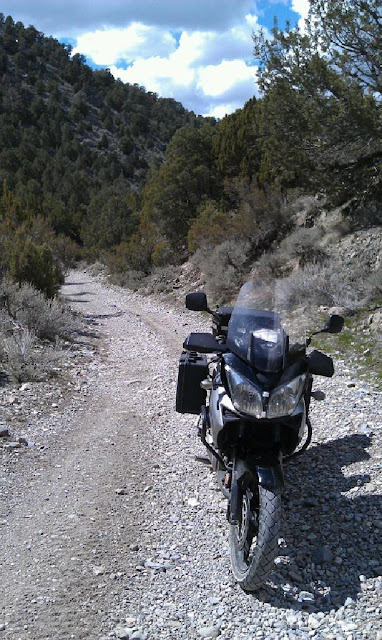 This is far enough for my dirt skills, I do a 400 point turn-around here. 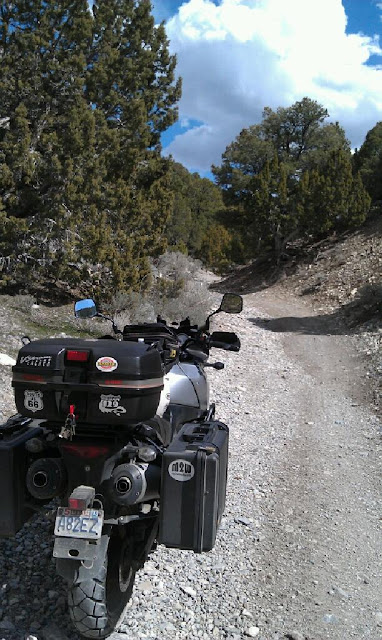 After that road I decide it's time to head for home, but when passing through Eureka I see this hole-in-the-wall deli.
It is small, different, and not crowded.....just the way I like em!
I turn a U-ey and go in.﻿
They have a menu of several sandwiches. The owner told me, 'if you want something not on the menu, I'll try to fix it for you..'.
But, I just got the burger - they made certain it was fixed the way I wanted it. My face and hands were a mess when I was done....so you know it was good! 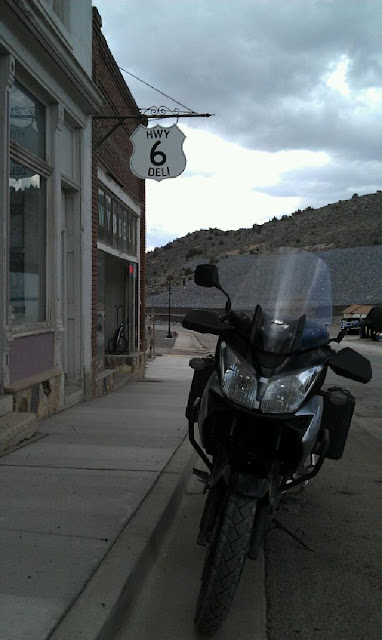 They have a unique gift shop. This photo is from outside on the sidewalk.﻿There are lots of other interesting things to see on a stroll through this quaint old town. 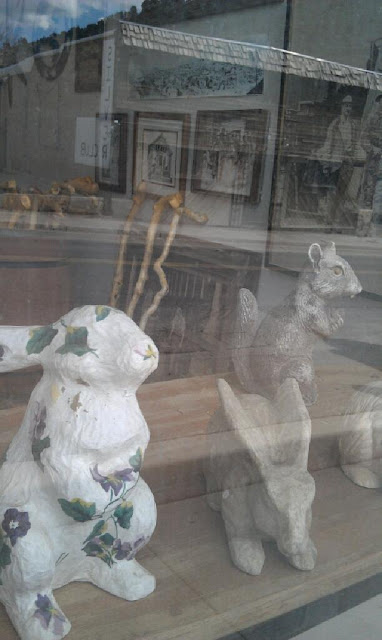 The Highway 6 Deli. Eureka, south end of town...worth the ride! 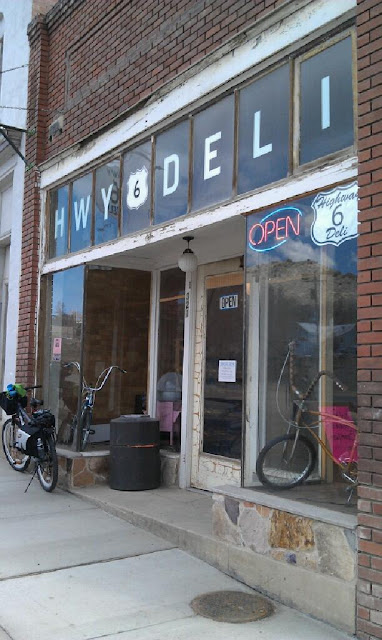 Vegashotwheeler, aka: Mike has set up another burger run to Hoover's Restaurant near Marysvale Ut on March 16th.

Unfortunately Mike didn't quite make it to Hoover's. No..he didn't crash, but he had a severe reaction to some meds, and an energy drink. The reaction kicked in as the northbound Vegas group neared Mesquite Nv. Mike was airlifted from Mesquite back to Vegas, spent a night in the hospital and is recovering nicely at home. He had texted me of his situation just as I was leaving my home to meet the Utah riders for our ride south to Hoover's.

When we all got together I apprised the group of Mikes situation, his condition was a concern for all, but there was nothing we could do for him, so we pressed on with the ride. 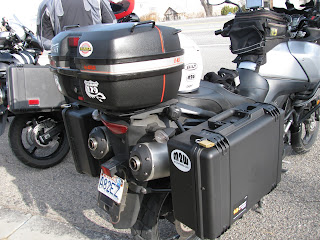 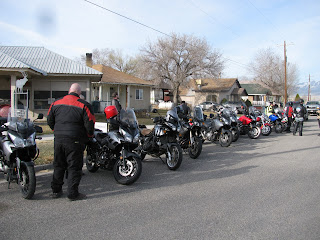 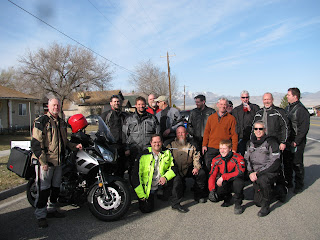 Just as we snapped the group pic, three more Rough and Tough Riders pulled up on their Gnarly Adventure machine! 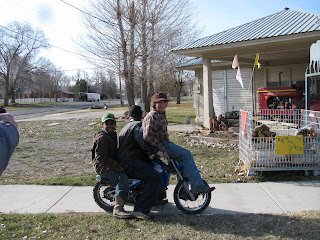 This called for another group pic. Those guys seemed like good kids, I hope they had as good a day as we did. 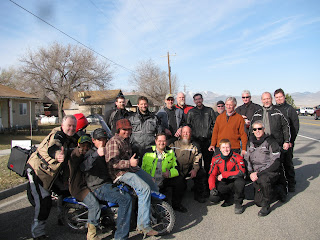 Ok, picture taken it's time to get riding. 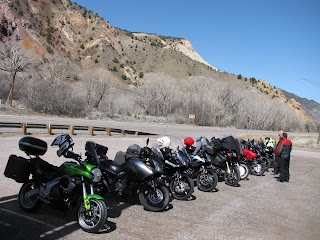 The Vegas guys arrive a few minutes later and we get down to the business of eating, talking, and laughing! 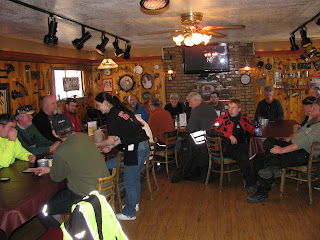 Vegashotwheeler likes The Hoover's Pastrami burger.
This pictures for you Mike!
(Thanks Jess aka WildManonaTiger for letting me photograph your burger.) 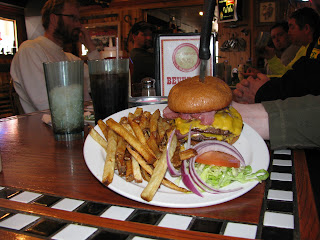 Another Vegas rider that couldn't make the ride is DesertDweller aka Steve. He LOVES scones...this pic is for you Steve!
(ps. Adrian and I enjoyed them for you...) 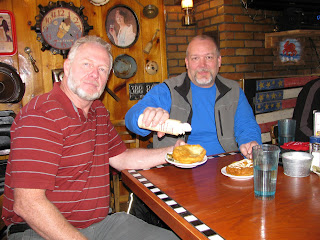 Hoover's served up their usual tasty food, and the riders had the usual BS session. As far as I know everyone had a grand ol time!
Thanks Hoover's!
Another pic of the bike line-up﻿﻿﻿﻿﻿﻿ this time including the Vegas bikes.﻿﻿﻿﻿﻿﻿﻿ 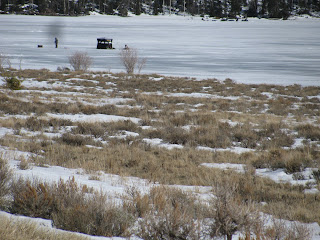 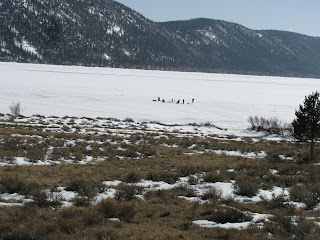 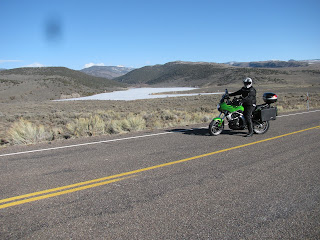 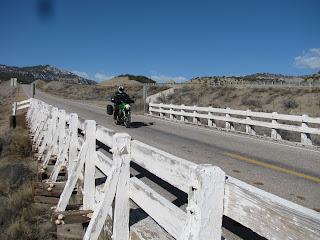 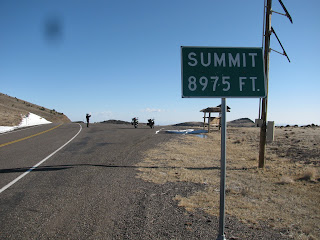 The day was windy, but the weather wasn't bad until we started up Huntington Canyon (SR 31) where we ran into a lot of white. A couple of times the visibility was down to 30 or 40 feet, that and glazy looking roads had us tip-toeing around the corners. But, it's all good, once we got down to Fairview and on to US 89 it warmed right up....haha.. and we had a great ride home! 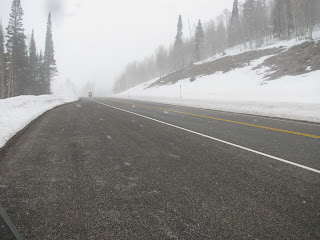 Thanks Vegashotwheeler / Mike, for setting up this fun event. Next time we hope to see YOU there!
Thanks to the 20-ish riders that attended - everyone contributed to the good time.
Thanks to Kaybi for letting me use your camera, and a special thanks to Ryker for the tiny finger print on the camera lense. (Grand kids...gotta love em!)
I can't wait for the next burger run!

No, I haven't had a spooky premonition, or a feeling of imminent demise. But after my recent mis-adventure on my beloved Gen, this poem filtered up through my motorcycle addled brain and landed on the computer screen. 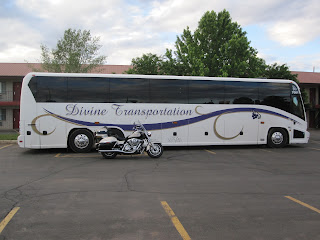 If I die on a bike

If I die on a bike, when you lay me to rest,
spruce up your hair and dress in your best.
Slap on a grin and try not to cry,
trust me - I can think of far worse ways to die.

If I die on a bike, that means I’d had the wind in my face,
been smelling the roses, and content in my own space.
It means I’d communed with the road, and felt that ribbon’s soul
(hopefully I was just wandering with no destination or goal).

If I die on a bike you can bet I was happy.
Ohhh, I could go on with all kinds of sappy.
But you should know this, if you do start to grieve
when that day comes this mortal coil I do leave;
I died doing what I love, and that should be enough
to make you smile, though I admit losing me will be tough! 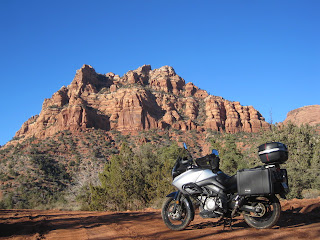 If I die on a bike, it means I was feeding my travelers lust.
Yes, I freely admit it’s the journey and not, "get somewhere or bust."
Because I’m never so happy as when my bike I’m astride,
there’s a thrilling enchantment in the words, ‘time for a ride!’

If I die on a bike please, give decorum and reverence a short rest.
Oh, I know we should always keep our behavior at its very best.
But raise your glasses and voices in a toast of the two things I most like;

“Here’s to boobs of all sizes, and Tombstone on a bike!” 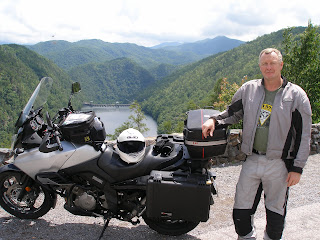