Tom (on sidewalk) just bought a shiny new Super Tenere, and he wants to take a nice ride to check it out.
Tom's son, Jess, friend Brad, and I accept Toms invitation to ride north into Idaho and Montana, going over Lolo Pass and on scenic roads through Idaho.
Tom on his S-10, Jess on his Tiger, Brad on a V-Strom 650, and me on my Ultimalte Adventure Touring Machine......the  Kawasaki Nomad..... waa waa waaaaaaaaaaaa.
I had wanted to take the V-Strom, but the rear tire I ordered from Tire Express hadn't arrived in time (and has STILL not arrived 10 days later...) so I was 'stuck' taking Elsa the Kaw..

Brad is a dirt bike guy, and this is his very first road trip.
Might as well break him in on the most boring road possible; we did the super slab slog to Pocatello.

Stopping in Pocatello we decide to try and find a Subway for lunch, I'm pretty sure I heard someone say, "Trust me, Subway's are everywhere!"
After much wandering through the crazy Pocotello streets, we finally find one and have a great lunch.

Idaho is nicknamed the Gem State and for good reason, it is beautiful! But it could also be called the Totally Effed Up Road System State. Trust me, don't go there without a (working) GPS. Our GPS was not currently working. 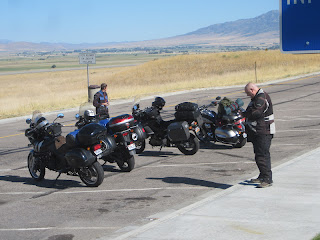 After lunch we take off to the Middle of Nowhere Idaho.There were some roads that none of us had been on, SRs 22,33,28. They look pretty lonely and Tom asks me if I thought we could get gas on those roads, "Of course," I say, "Trust me there will be gas somewhere along the way."
And there was....sort of, our guages are getting pretty low, but  all it took was some smart phone net searching, and a two phone calls, and voila! There was gas on another nearby road... not far away in Mud Lake Idaho.See? I was right! 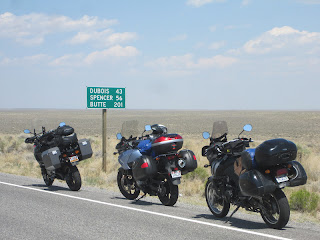 Gassed up and faunching at the bit, we are off again. Next stop is Tendoy, Idaho. The very nice lady at  the very small store asked us all to sign her 'visitors registor'. We happily did, and she and her son gave us some good advice as to where we could camp.We asked if the campsite had running water, the lady said "no", and suggested we buy more bottled water, but the son said "Trust me there is a water tap at the campground". 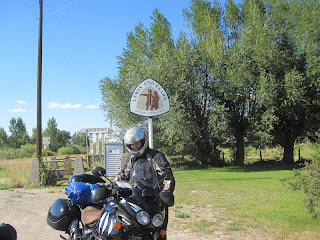 There was not a tap. Lucky for us we had bought a gallon of water at the store.
The campground was 6 miles up a dirt road. 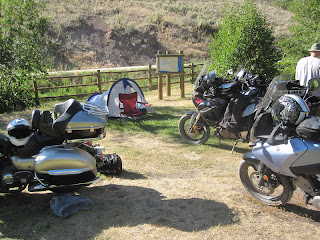 Setting up and getting comfy, that is until Brad tells us he saw two bears not far from camp. 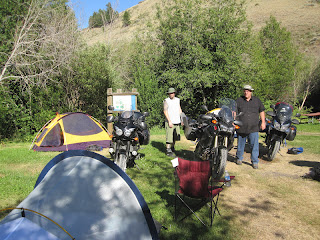 It's all good and the next morning is gorgeous! See the moon? 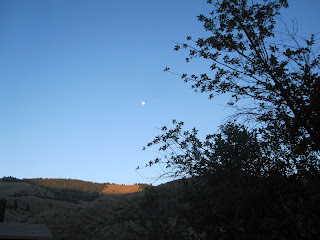 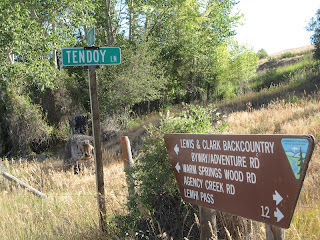 Had we seen these last night we might have put them on the menu and gobbled them up! 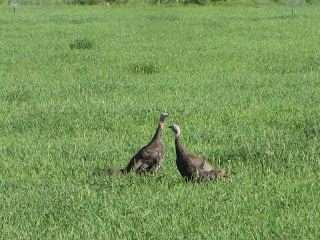 We make it to Lolo Pass and Brad poses by the famous sign. Can you see his grin under the helmet? 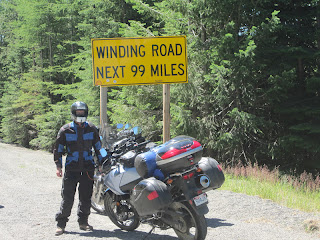 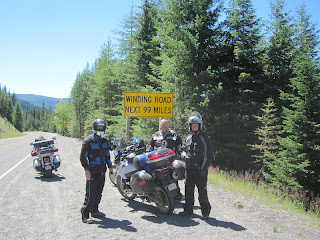 I had told the guys that we didn't need to fuel in Lolo City, "Trust me" I said, "There is gas farther up the pass." Once again I was sort of right. We somehow miss the station I was thinking about and arrive at the visitors center at the top of Lolo. Discussing our fuel situation a man overhears us and tells us of a gas pump a short 12 miles farther down the road.
Lochsa Lodge has a couple of pumps. The unusual thing about this place is the sign on the pumps, "Gas first, then pay inside". Wow...don't see that very often!
Once again, I was sort of right....when will these guys learn to trust me? 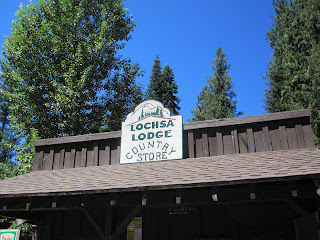 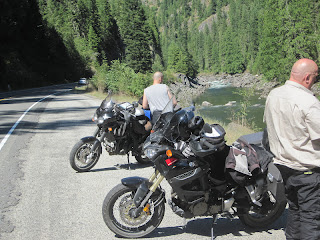 There is this large "Elk".....on the hotel roof where we stay. The elk seems to be holding up the shiny round street light, if you take a look from the rear of the elk you see another shiny round thing on his ....underside. 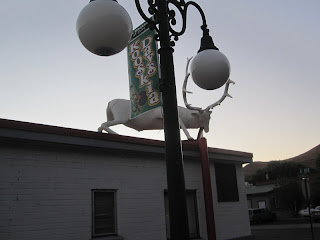 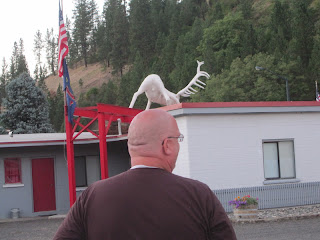 Next morning, we get gas and other necessities as we prepare to leave Kooskia. 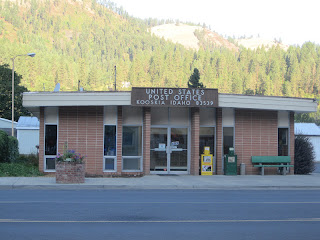 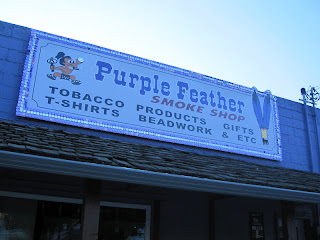 A few miles out of town. 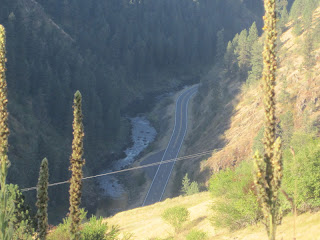 A few more miles down the road. 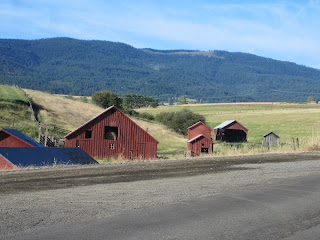 Rest stop. All these Rest Stops were actually Catch up stops. Those guys would stop so Elsa and I could catch up. 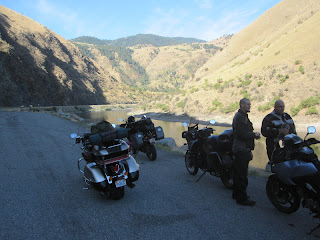 Don't text and fly, a lesson this bird learned to late! 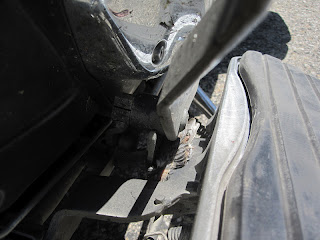 On our way to a campsite at Challis we see this wildfire. The firefighters camp is in the foreground. 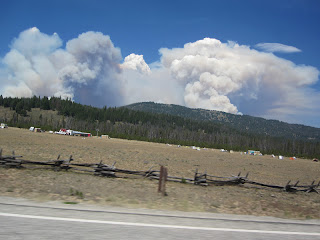 Down the road aways. 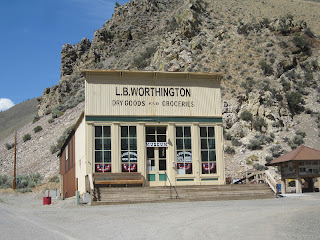 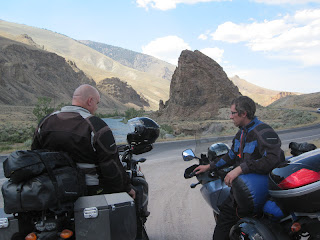 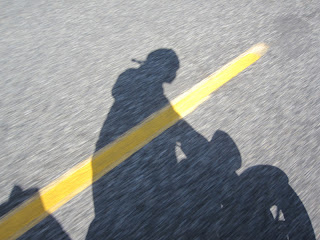 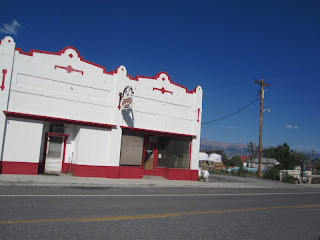 At the last catch up stop before we ride to Challis we wonder if we have enough gas to make it without fueling. The mileage we needed to go would put me at around 200 miles on this tank, so I say, "I can make it, Trust me"
The other guys stopped at a station to top off, but I went on, mostly because I knew I had some back up.
And.
I make it to Challis.
See? No problem! Elsa has a 5.2 gallon tank. Pleeeeeenty of gas still in the tank.... 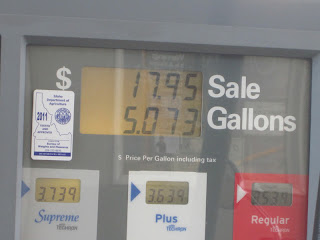 While we discuss where we want to camp, one of our party has an issue crop up that is beyond his control. He decides the best solution is to ride for home. We've already done a little over 400 miles this day, and home is a little over 300 miles away. Pfffffft...no problem!
We started out as a group, and we'll end as a group as well. We all grab some snacks and jump back on the bikes to ride home. Alls well that ends well, and this was, well, a GREAT ride. Great roads, great company.
Thanks Tom, Jess, and Brad for a fun ride!
If you get an invitation from Tom to go on a ride, do it! Trust me....
Posted by Ken at 8:02 AM

Trust Me, I'm bringing a working GPS, with gas station waypoints. And I'm gassing up every chance I get as the GS seems to guzzle down the last half of the tank no matter how many miles were on the first half.

But it looked like a wonderful trip! Sorry your tire hasn't arrived. You gonna go kick 'em?

thanks for the memories, we rode Lolo pass on the way back from Montana last year. Same photo by that 99 mile sign too.

Lori - Tire is still not here so yes I am, and right in the shiny round thing too!

bob - Better to learn 'trust me' than the words we were saying while lost in Pocatello..

Thanks for reading and your comments!

Nice ride, great scenery.
I'm glad the bears and the fire stayed away!

Nice ride my friend, you know how to enjoy the good times!

I've been through Tendoy. I stopped at the same store and probably spoke to the same nice old lady. I have the 99 mile sign pic too.

I love Idaho! I can't wait to go back.

Great post ken and some lovely pics. very envious of that great weather - it's still winter and damn cold Downunder!

Nice post, especially all of the "Trust Me" comments. I don't know how many time I've heard that statement...

""Gas first, then pay inside" is a lot more common the farther north you go. I found that this pay first was a real hassle when I was down this summer. It forced me to use a credit card a whole lot more often than I was planning.

bluekat - Thanks! And ditto on the bears and fire!

Erik - I agree, Idaho is hard to beat!

Jules - We need to work out some kind of cultural exchange where we can ride each other's summer!!

Richard - Smaller communities seem to be more....trusting.
I was very impressed how genuinely friendly the Lochsa resort staff was, especially considering the large number of tourists they must see each day.

From the pictures, that was time well spent. I have read your post and I must say am impressed by your enthusiasm. Michelin Motorcycle Tires