Perusing a Utah based online classified ad I saw a 1981 Goldwing for sale.
Driving to look at the bike required a trek westward to the outskirts of a small town. We drove on the 4 lane 65mph divided highway... and made the turn (after braking panic style) onto a hard-to-see dirt road that soon turned into a rain soaked 8 or 10 acres of a muddy oily parking area full of semi trucks and trailers.
We made our way through the maze of trucks and trailers until we arrived at the opposite side of where we had entered the lot. It was there that we saw the sellers home, a 23 foot camp trailer.
The trailer was almost level and had been set up with a sizable deck outside the door, apparently it was there for an 'extended stay' as a slightly leaning porta-potty was on the greasy ground about 20 feet away from the kitchen end of the trailer.
The ad said the bike ran (it didn't), and was in exceptional condition (it wasn't). The panniers lacked more than half of the latching mechanisms, the handlebar rubber grips were missing. None of the lights worked, part of the housing for the timing belts was laying nearby on the ground. The shaky fairing was about 70 percent complete. And the mounting of the panniers seemed to be faith based and one pothole away from falling off the bike.
So.......obviously.....I wanted this bike!
Pics of the bike;
One of two parts bins that came with the bike. 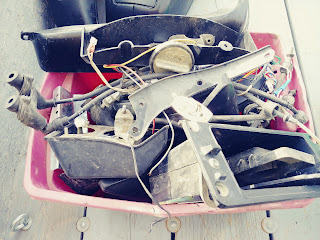 The price wasn't right, but it was close enough that I took the leap. The next morning I returned with our trailer to retrieve my latest project. 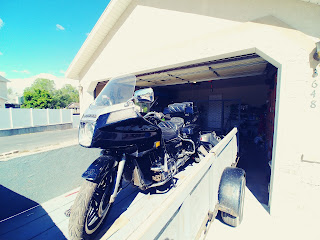 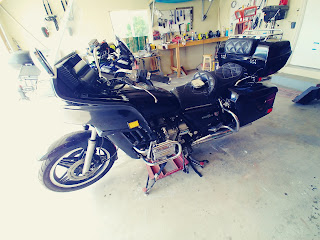 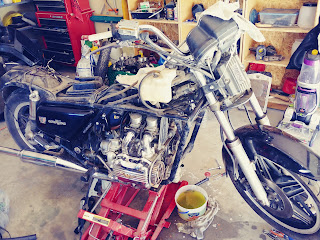 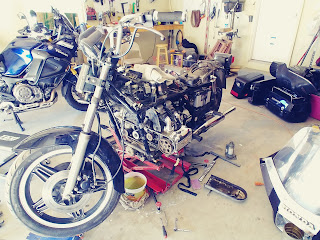 Two new timing belts were an absolute must. New coolant, additional oil, I connected the spark plug wires and cleaned them as I hadn't purchased any new ones yet. The throttle line and choke cable were almost unworkable. After some industrial strength cleaner, lots of elbow grease, and chain lube - the carb was just like new....ummm....noooo, no it wasn't - but it was at the very least, operable. 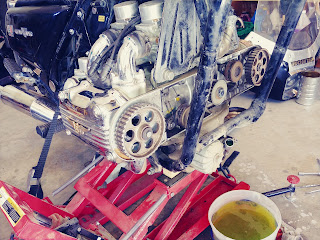 Having completed the above tasks, and several more I finally tried to start the bike - annnnd the battery was dead. The battery charger soon refreshed the old battery with enough juice that when I again hit the starter button the the old girl immediately didn't fire up.
But then more playing, more adjusting, more battery charging and the next button push resulted in the bike starting and running like a champ......a tired, old, overweight champ, but a champ nevertheless. 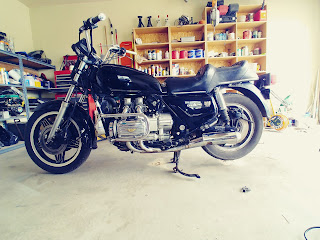 The bike is FAR from finished, it still has no working lights, I haven't changed the oil as the ordered filter has not yet arrived. It needs the brake rotors either turned or replaced and new brake pads. The steering head bearing and fork seals must be replaced, and a lot of other piddling stuff that is part of buying not only a used bike, but a "running and in excellent condition" used bike! 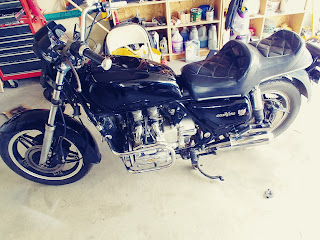 Greetings Ken,
Nice meeting up with you today in Eureka. I apporeciate your site so keep posting your adventures.
Mark
Reo45@aol.com