Mike, on the right, sets up a burger run...except we had tacos instead...in Boulder, Utah.
Adrian, on the left, and I rode south together and met Mike and the other Vegas guys at the taco food truck at the Boulder Museum. 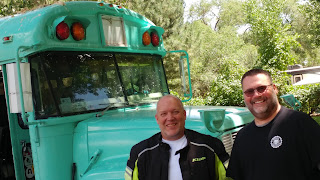 The tacos were....'meh', but the short conversation was super.

I had a bird strike on the way down, which was a significant part of the convo. It flew smack onto my face shield as I was going 72 mph. I know my speed was 72 because I had the cruise control set. My head was rocked back and I coasted to a stop. Adrian pulled next to me and I then followed him to a pull off and walked around for a bit till I felt 'normal' again. 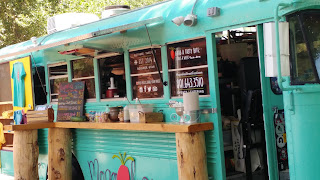 After we all ate we took a short ride up the Burr Trail... 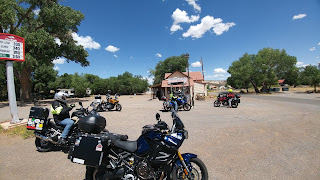 Then a hike into this skinny place.. 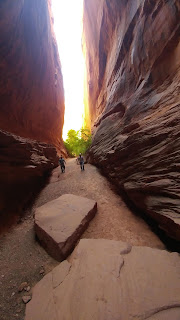 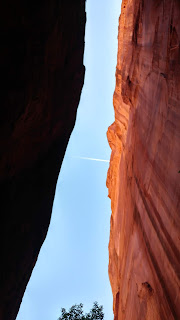 After the short hike in the middle of the short ride we all headed for our respective homes. 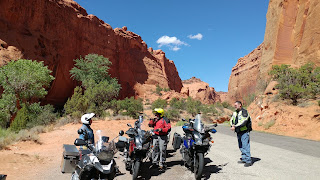 The Vegas boys on their way out of the Burr Trail. 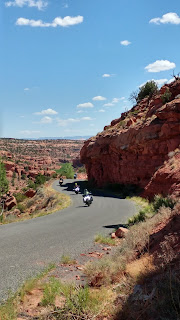 Adrian and I hit a toad-strangler rain storm on the way north, it didn't last very long, and the rest of the ride was super!
About 560 miles for me, I had the least miles of the group.
Posted by Ken at 4:43 PM

Richard, that slot canyon is off the Burr trail which is by Boulder. The Burr would have been a dusty trail back when you peddled through Utah.