A week in southern Cal chasing the Triple Crown

I'm able to go for a week to Indio in Southern California to pick up some more Triple Crown items.
But first an overnight stop in Las Vegas and lunch with good biker buddy Mike aka Vegashotwheeler. We did have a very enjoyable lunch then stopped in to the HD store to drool over the shiny toys... 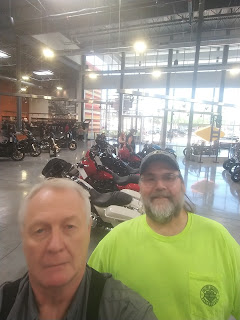 Departing Vegas I'm south bound on the super slab until I see the colored rocks....my phone cam does ok until I shoot far away pics...
Sorry, I don't know the story of these rocks.. 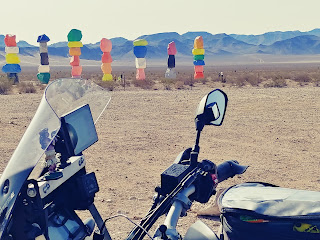 I stop in Amboy for a cool drink and this guy motored in a few minutes later. This is a 1974 Moto Guzzi....and what a beaut! He is also on his way to So Cal and then will wander back home to Washington. The Goose ran as good and she looked! 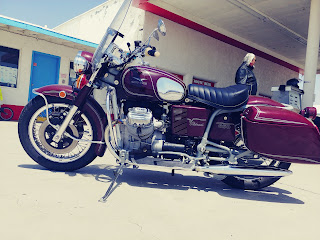 A little ways past the Amboy station.. 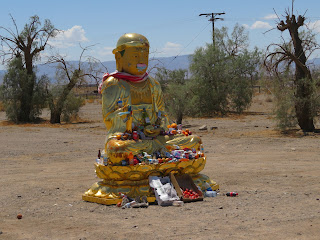 And yet a little farther down the road....
I've found that "art" is a three letter word that has an infinite number of definitions. 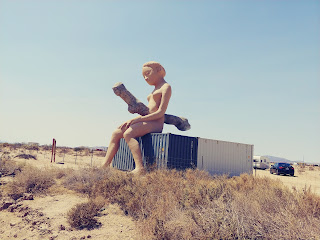 And not forgetting my reason for being here...
I'm able to check off two missions, two parks and two roads.
Mission San Luis Ray de Francia 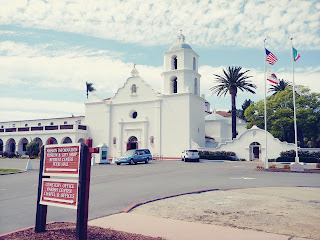 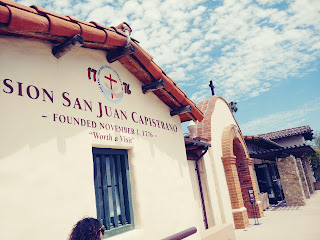 Across the street from the mission.
I didn't go in and ask about the story.. 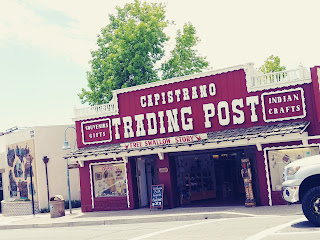 The two roads are Ca74 and Ca76 both WELL worth the time!
The Parks were Mojave NP and Joshua Tree NP 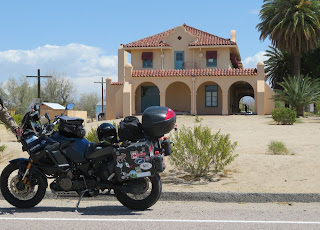 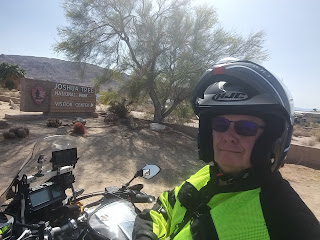 And on my way home between Vegas and Mesquite I see this guy on the side of the road.
He is from Japan and an exchange student living in L.A. He has somewhat passable English. And I'm guessing not to much in the way of riding skills.
On the other hand, and more importantly than those two things, he has an adventurous spirit!
He had set out from L.A. to see the Grand Canyon and Antelope Canyon.... unfortunately he had a 'bad day' on the bike. Whether the nasty winds had a part in his get-off or not I don't know, I suspect they contributed to his spill...the winds WERE bad that day.
At any rate he was checking the bike out when I pulled over to see if he needed help. Using my tools we were able to make some adjustments and corrections and get him back on the road - at least to the nearest gas station were he purchased some anti-freeze and we replaced what had escaped during the time the bike was laying down. I hope we got the right kind of anti-freeze (there was only one choice at the store) but I guess any is better than none.
You can see he has no luggage on the bike - that's because it is on his back, and his riding gear leaves a bit to be desired, what you probably can't see in the picture is his injuries. There was some blood on his pants, and his hands were a bit rashed. However, after the crash he picked himself up, dusted off his pants,  bandaged his wounds and continued on with his trip.
That is a "Well done" in my book! 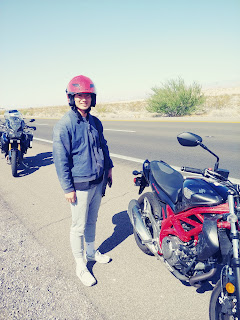 So, that's another several items checked off....sadly on the last two days my GPS went toes-up so I didn't get all the checks I had planned to get, but there is always "next time".
Thanks for reading!
Posted by Ken at 8:56 PM

Don't get why some people wont wear any safety gear, it can be the difference between living to ride again another day or never riding again or dead.