Part III and the final 10 stations in Utah.
Except the final station, Deep Creek station, all these stations are easily accessed from the Pony Express Trail road, a 141 mile dirt road that stretches from Faust to the Ibapah road near the Nevada state line.

The next morning I'm on the PET again, this time my first stop is at,
*Simpson Springs station* 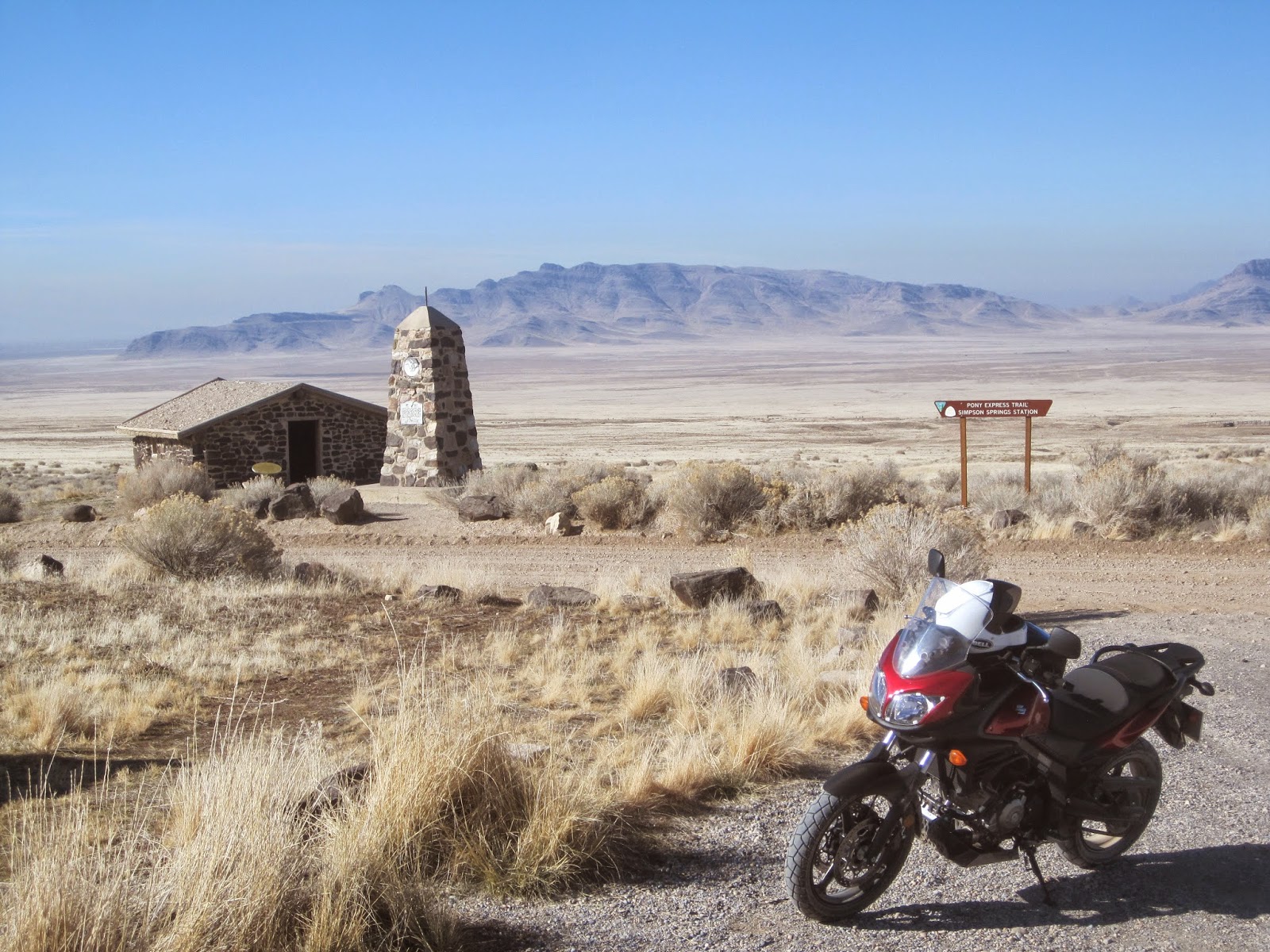 There is beauty every where in our world, and life is what you make of it, but some would say that the scenery in this particular spot of the world area leaves a little bit to be desired. 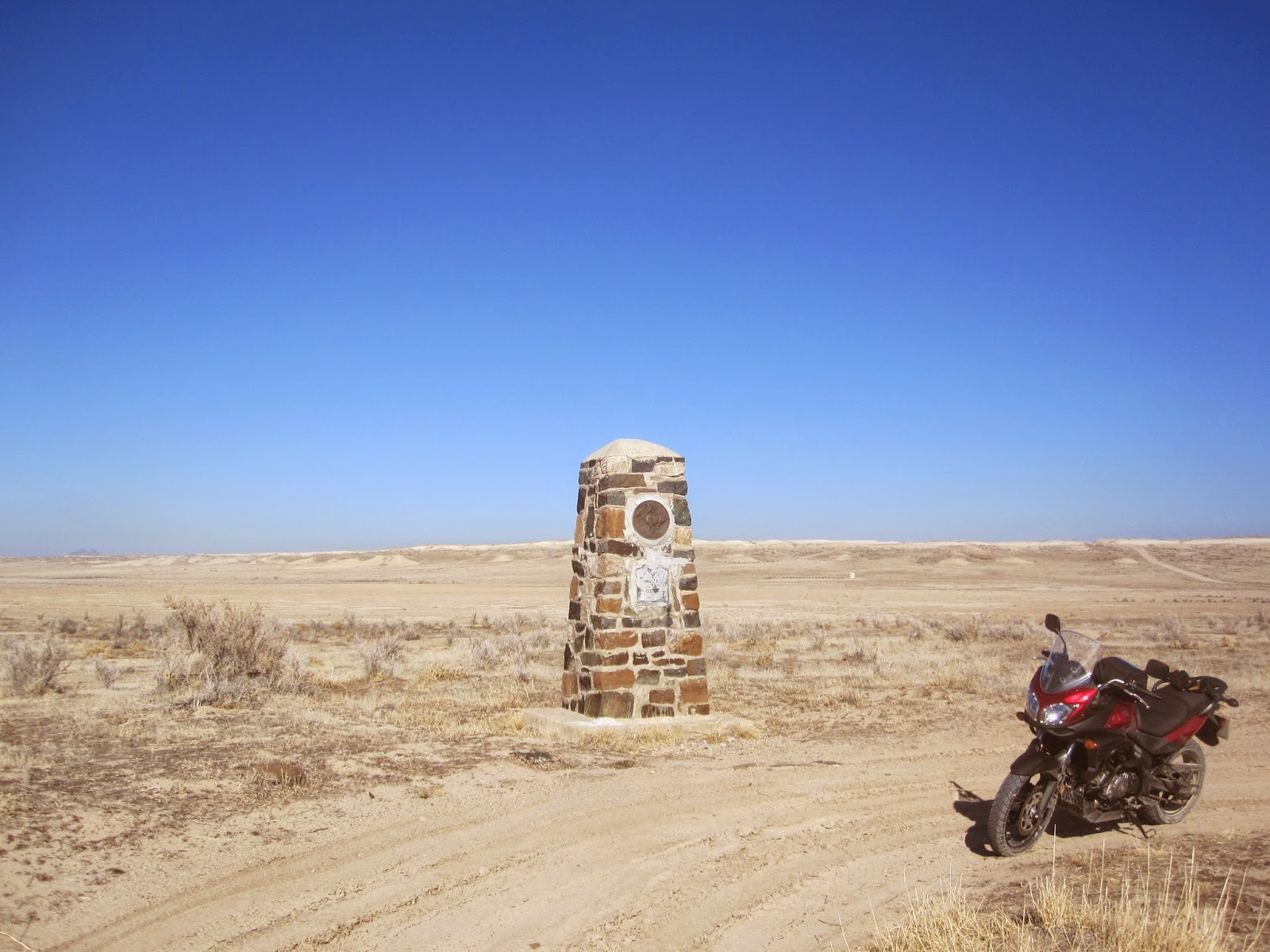 *Blackrock station*
(Named for the basalt rock outcropping in the rear of the picture.) 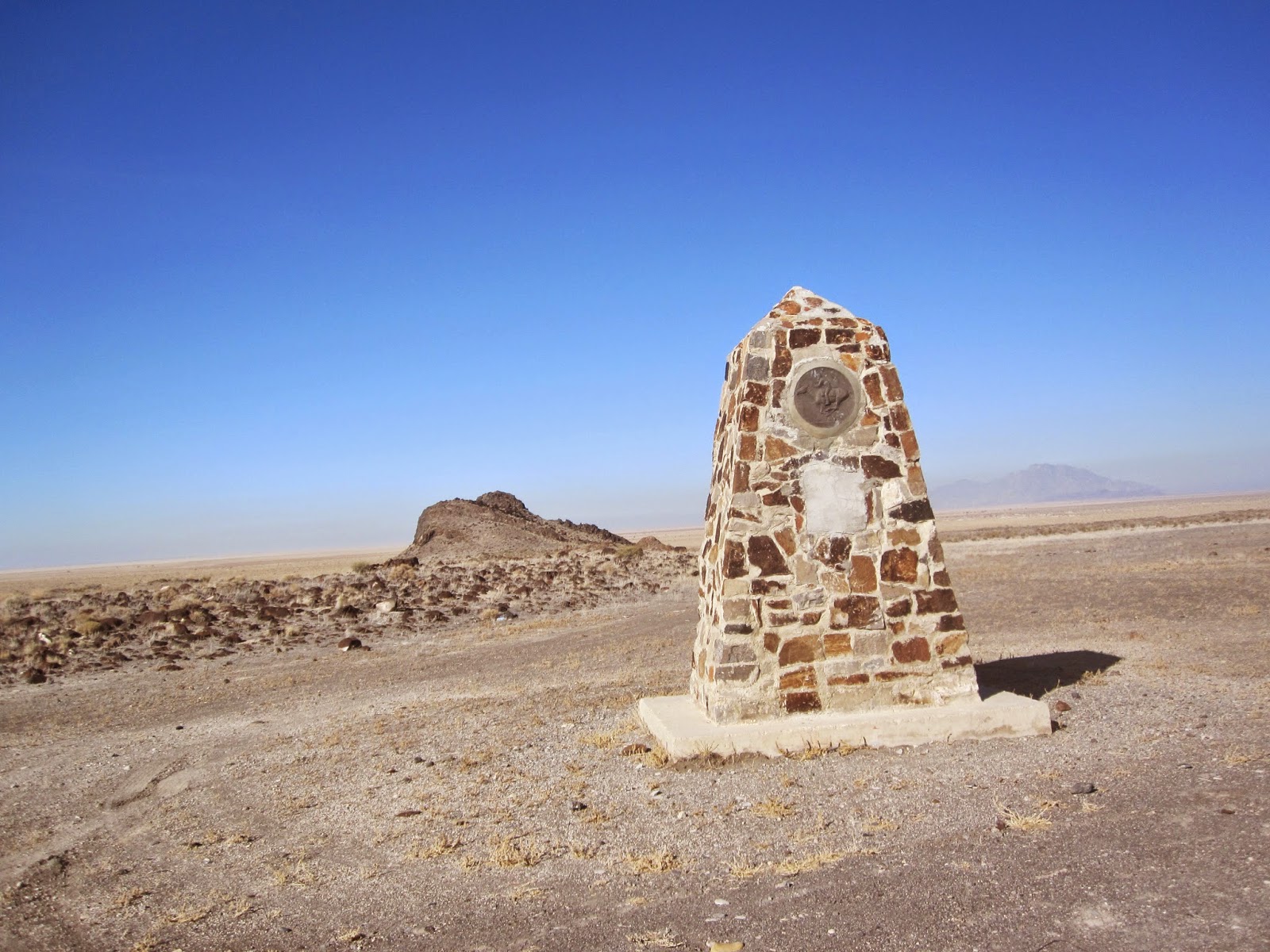 Entering Fish Springs bird refuge.
Fish Springs is an 18,000 acre bird refuge established in 1959 administered by the U.S. Fish and Game department. It is an important migration stop for numerous bird species. I have spent some time 'birding' at Fish Springs, and stayed overnight once. It is a neat place, especially if you find fascination in our winged friends.
I've ridden about 62 miles on dirt road to reach Fish Springs, which is just a little farther than the distance on dirt road to reach it from the other direction. 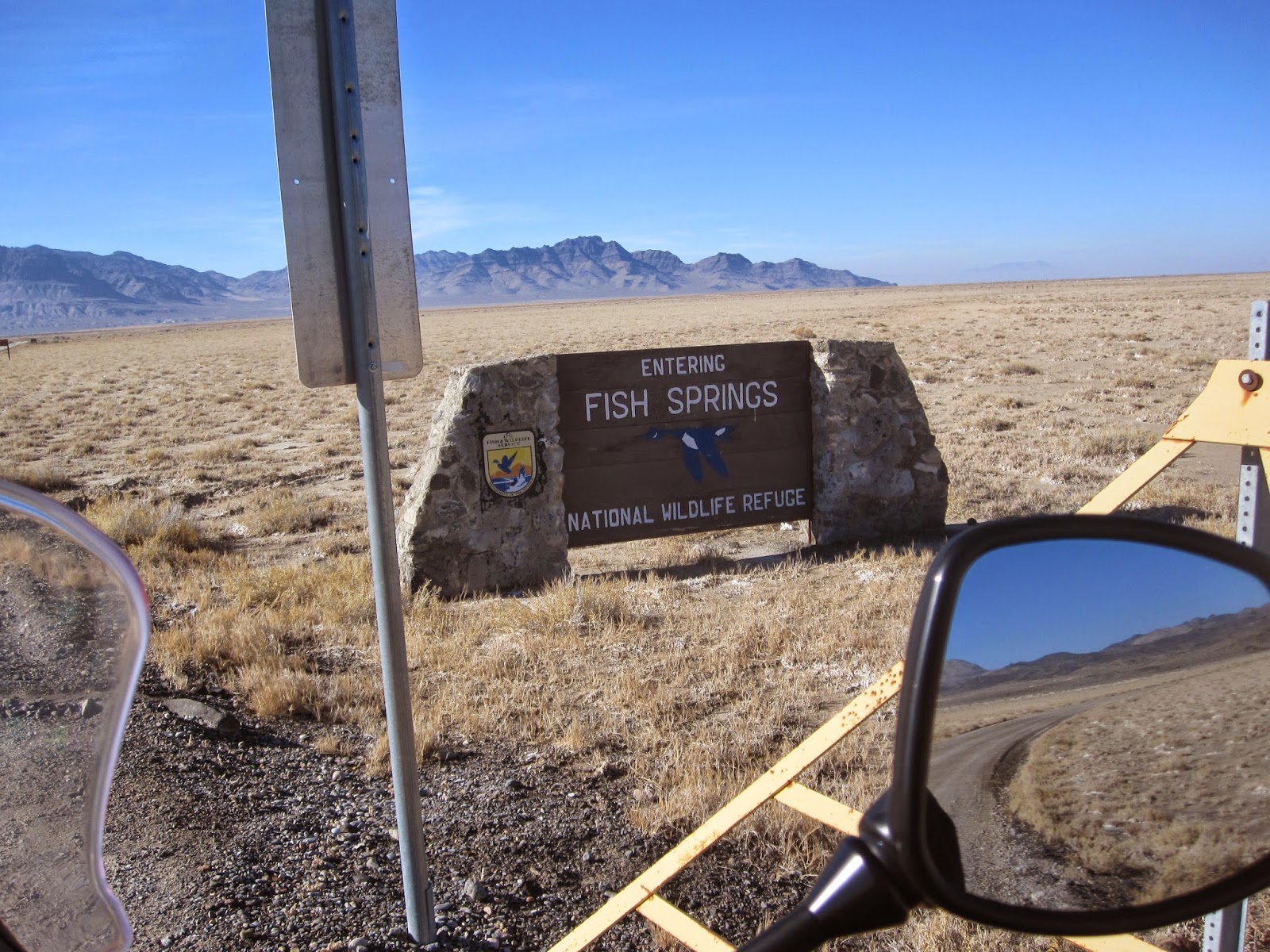 Mark Twain had this to say about this area; "And now we entered upon one of that species of deserts whose concentrated hideousness shames the diffused and diluted horrors of the Sahara - an 'alkai" desert.... Imagine a vast, waveless ocean stricken dead and turned to ashes; imagine this solemn waste tufted with ash-dusted sagebushes; imagine the lifeless silence and solitude through the midst of this shoreless level, and sending up tumbled volumes of dust as if it were a bug that went by steam; imagine this aching monotony of toiling and plowing kept up hour after hour, and the shore still as far away as ever, apparently; imagine team, driver, coach, and passengers so deeply coated with ashes that mustaches and eyebrows like snow accumulation on boughs and bushes. This is the reality of it." 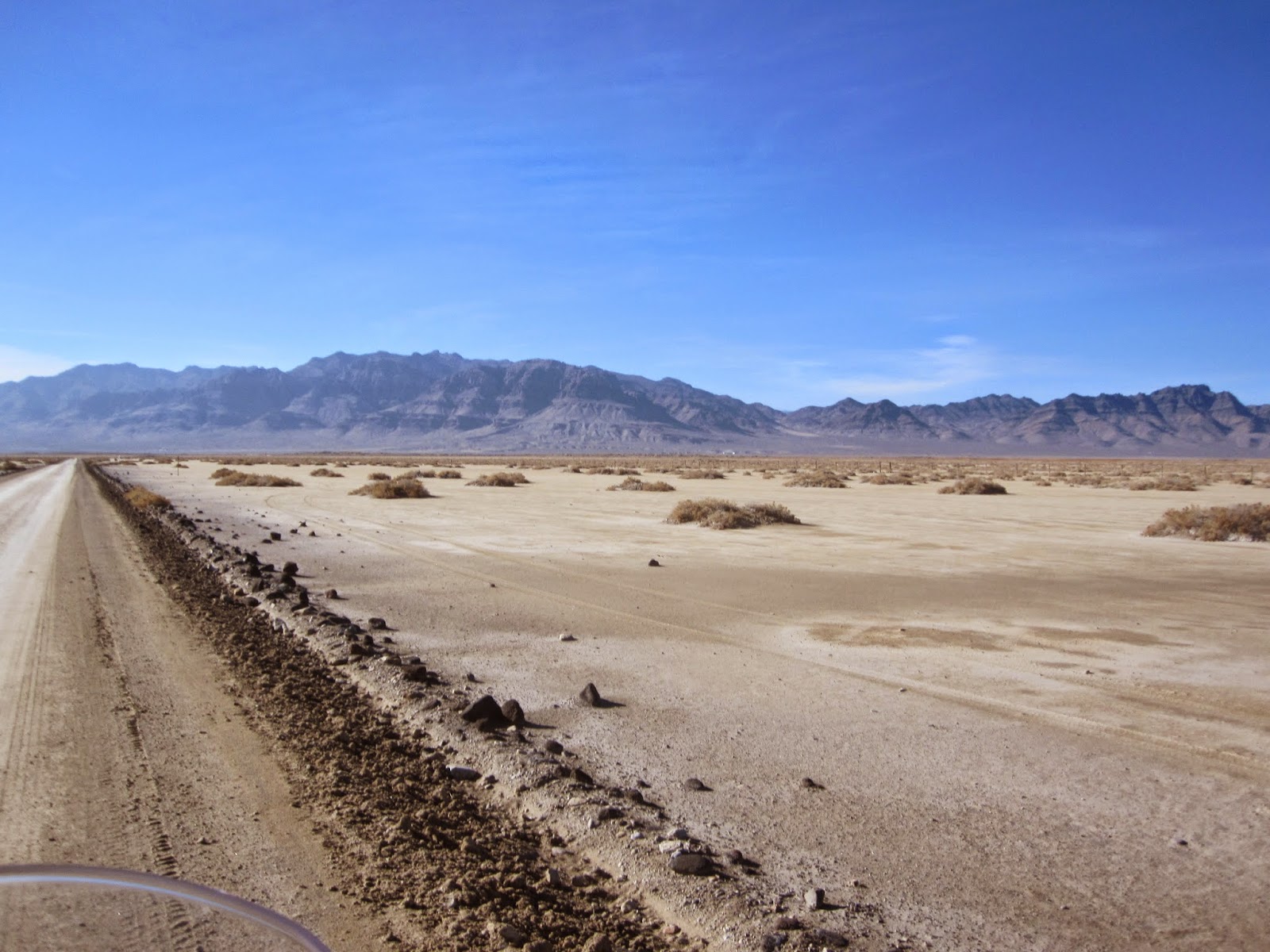 You can see the water in the background that is Fish Springs bird refuge.
*Fish Springs station* 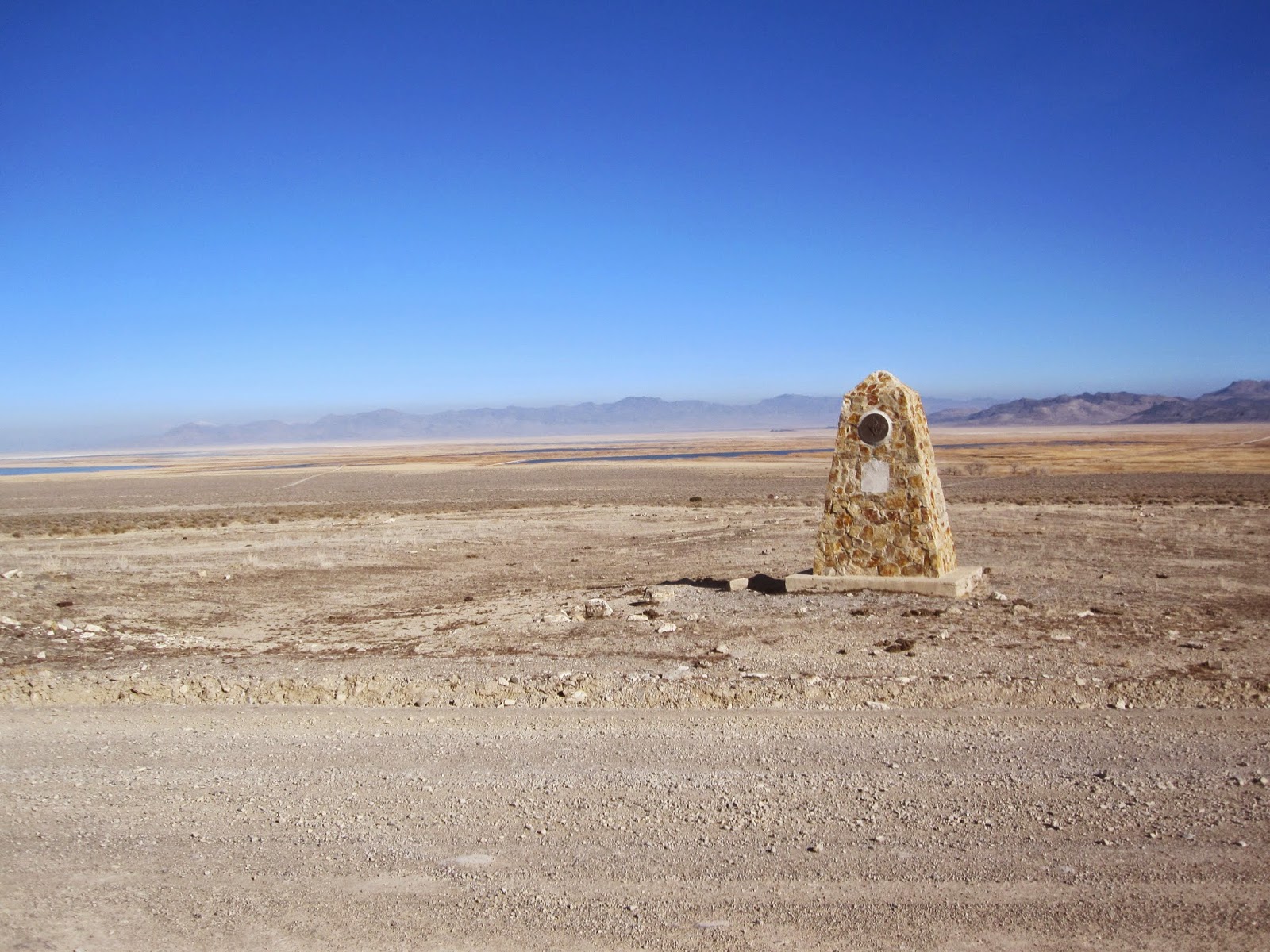 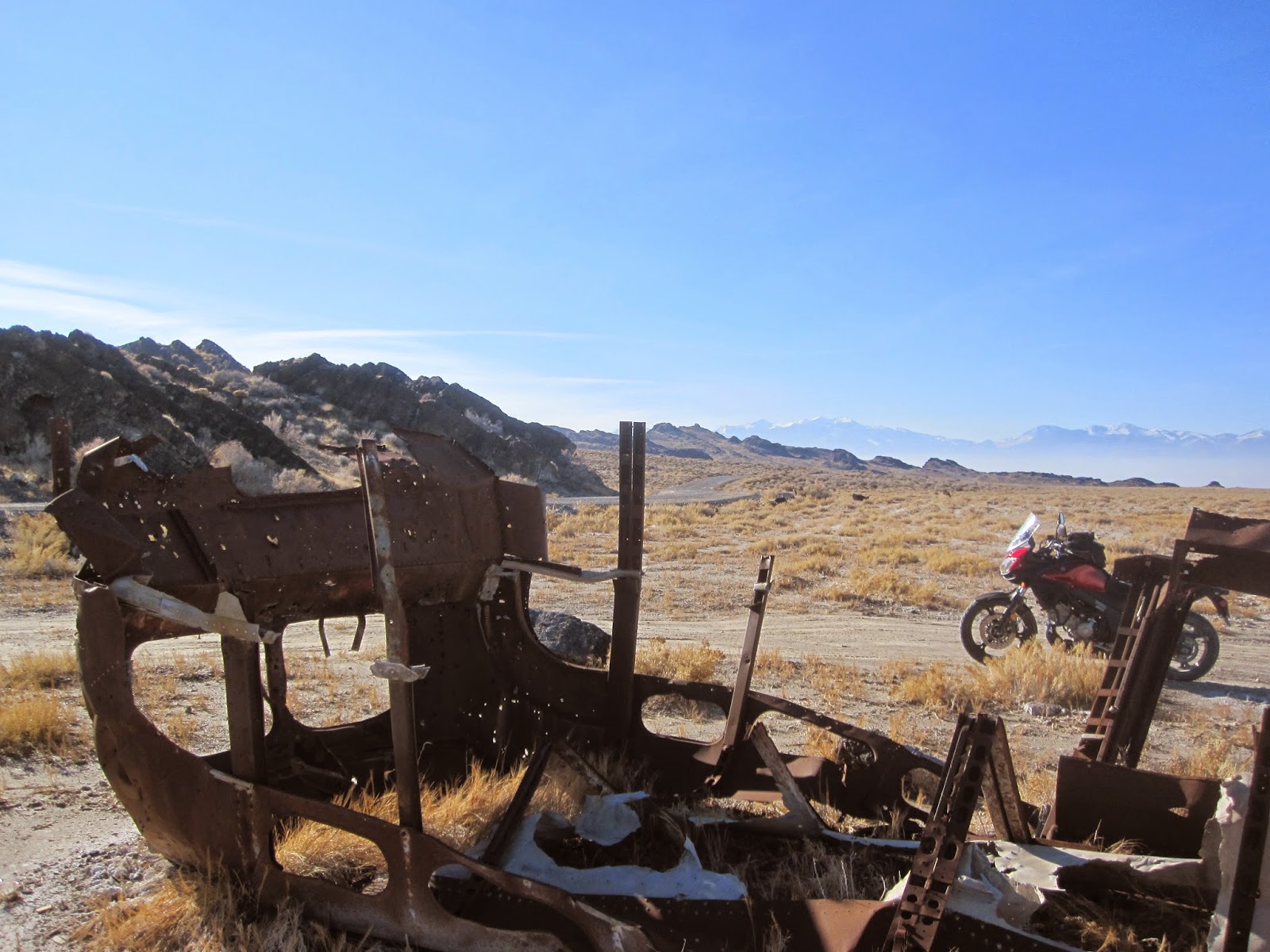 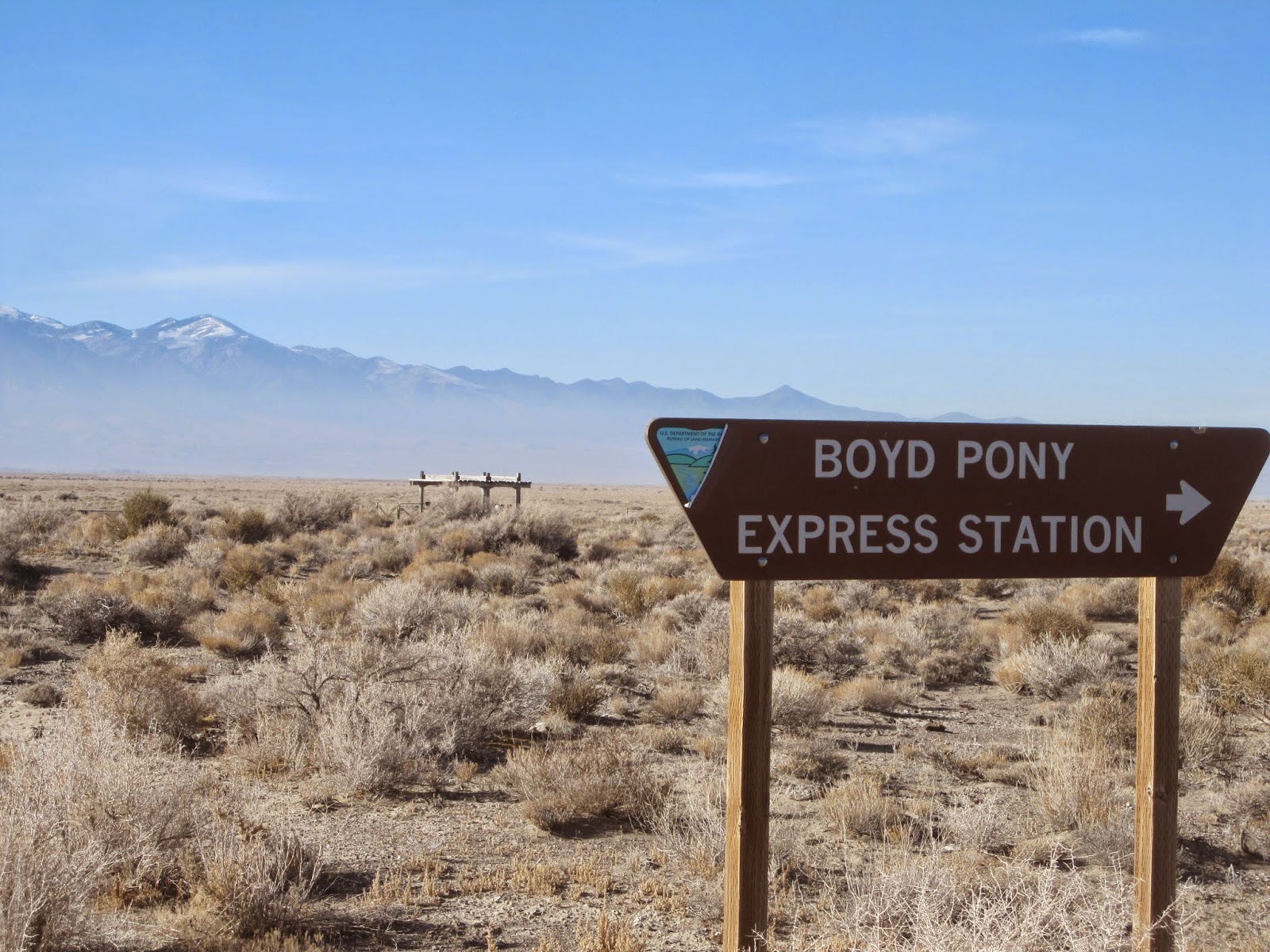 I reach the tiny town of Callao one of the most remote towns in the U.S. Pronounced kall-ee-oo.
The sign in the picture below is actually a map of the town showing where each resident lives. Callao was first settled in 1857 and called Willow Springs, but changed their name to Callao in 1895 as the residents felt like Willow Springs was too common a name. Callao was suggested by an old prospector who told them the geography was similar to the Callao in Peru. It is unknown why the American pronunciation was used and not the Spanish version. Population numbers are vague, but it appears that there are about 13 families or households living in Callao. 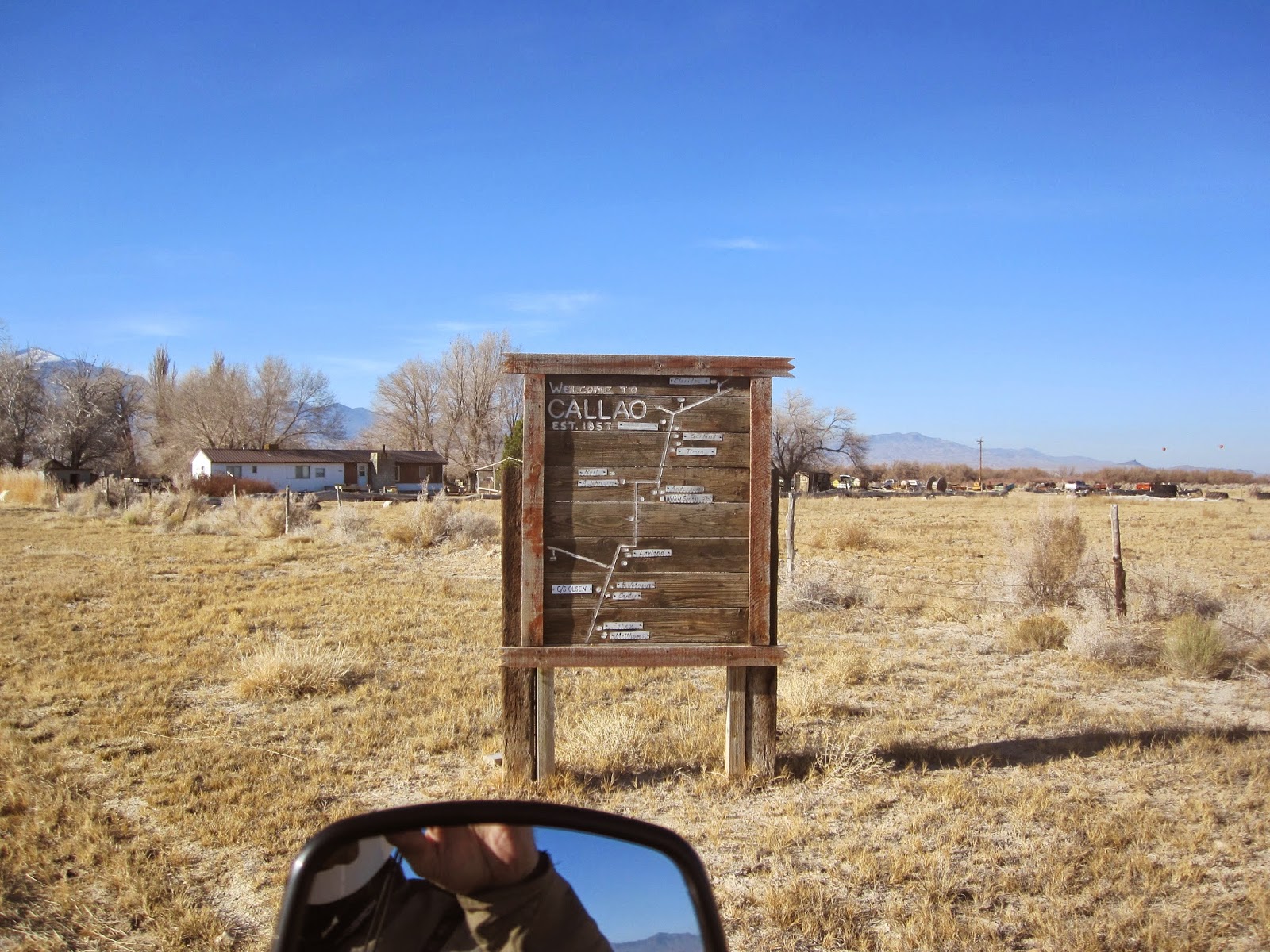 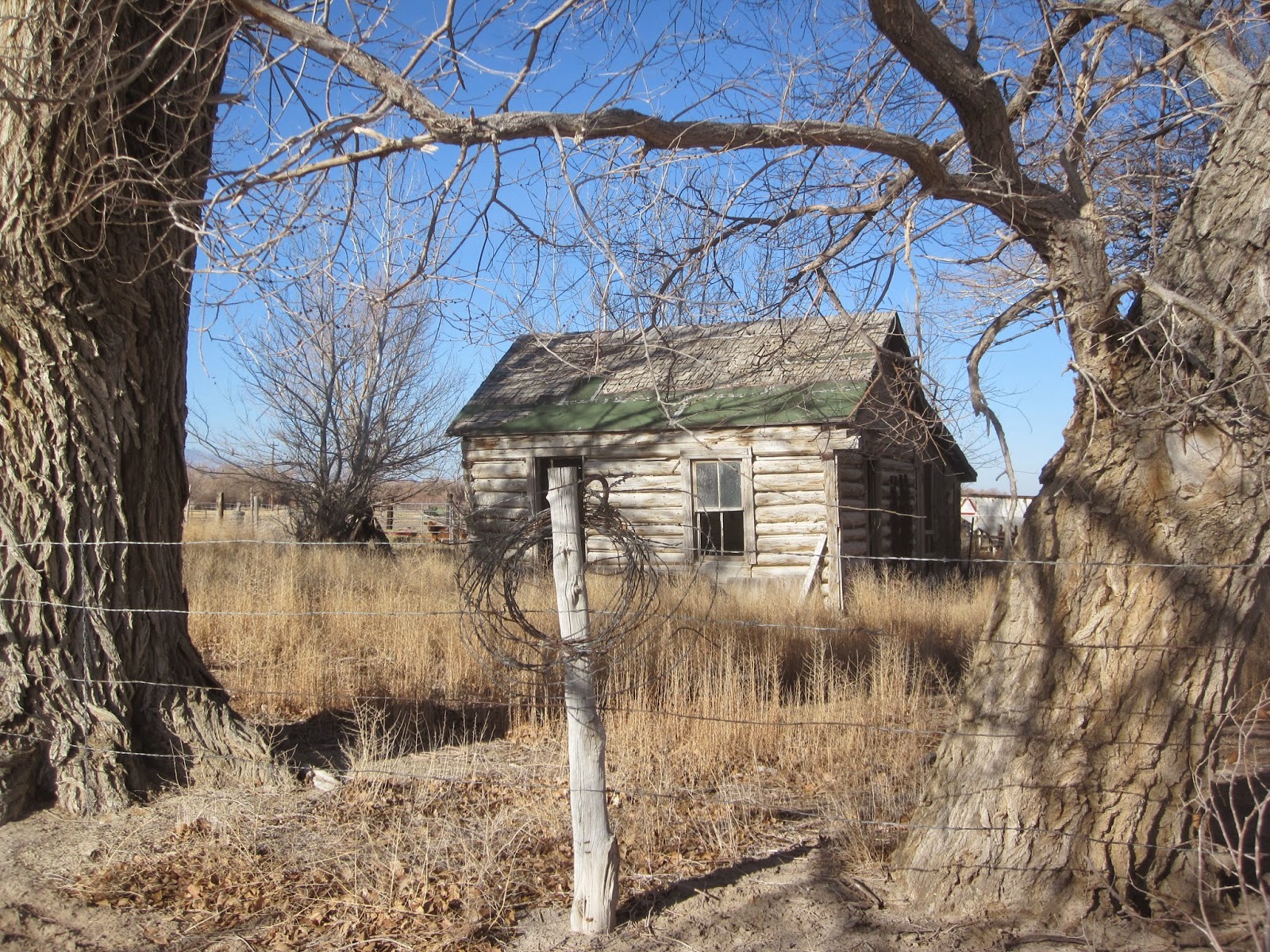 The road I'm riding is not only the Pony Express Trail, it is also part of the Lincoln Highway.
On the western side of Callao is the
*Willow Springs station* 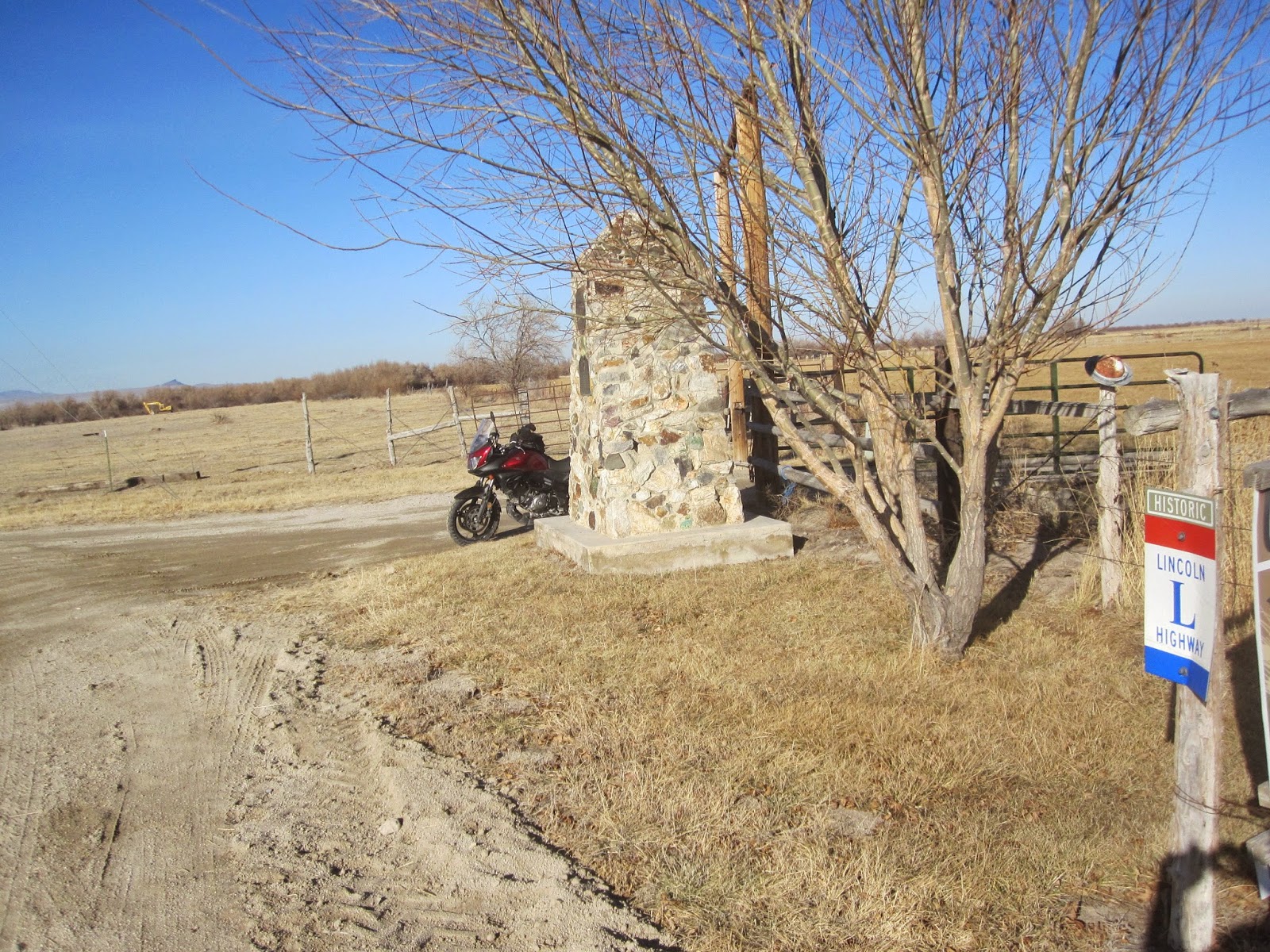 And on to the next station,
*Round station* 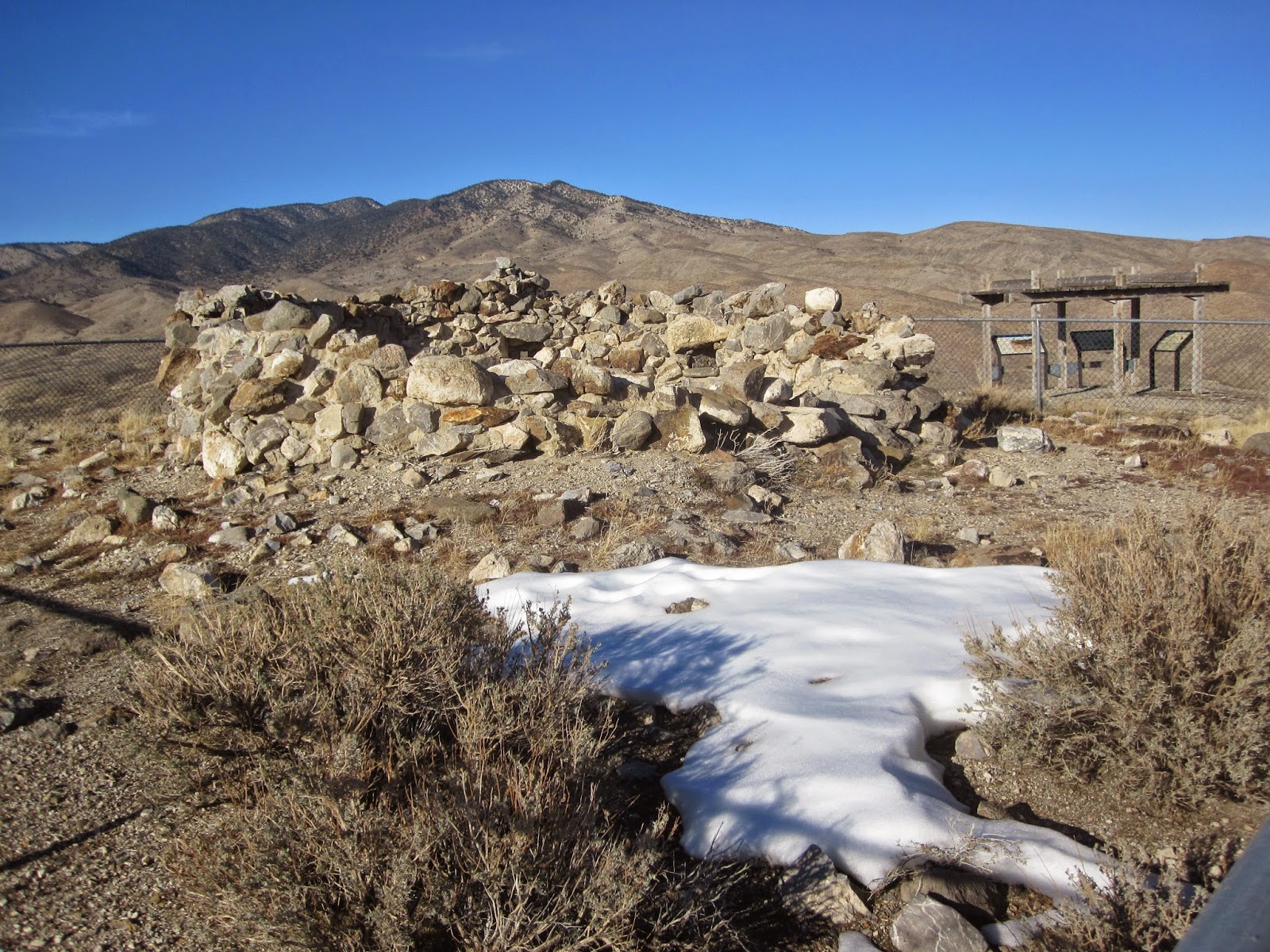 Note the gun ports in the remaining ruins of Round station. Originally built as a stop for the overland stage route, the remains you see are the third effort at building this station as the first two were burned down by the Indians. 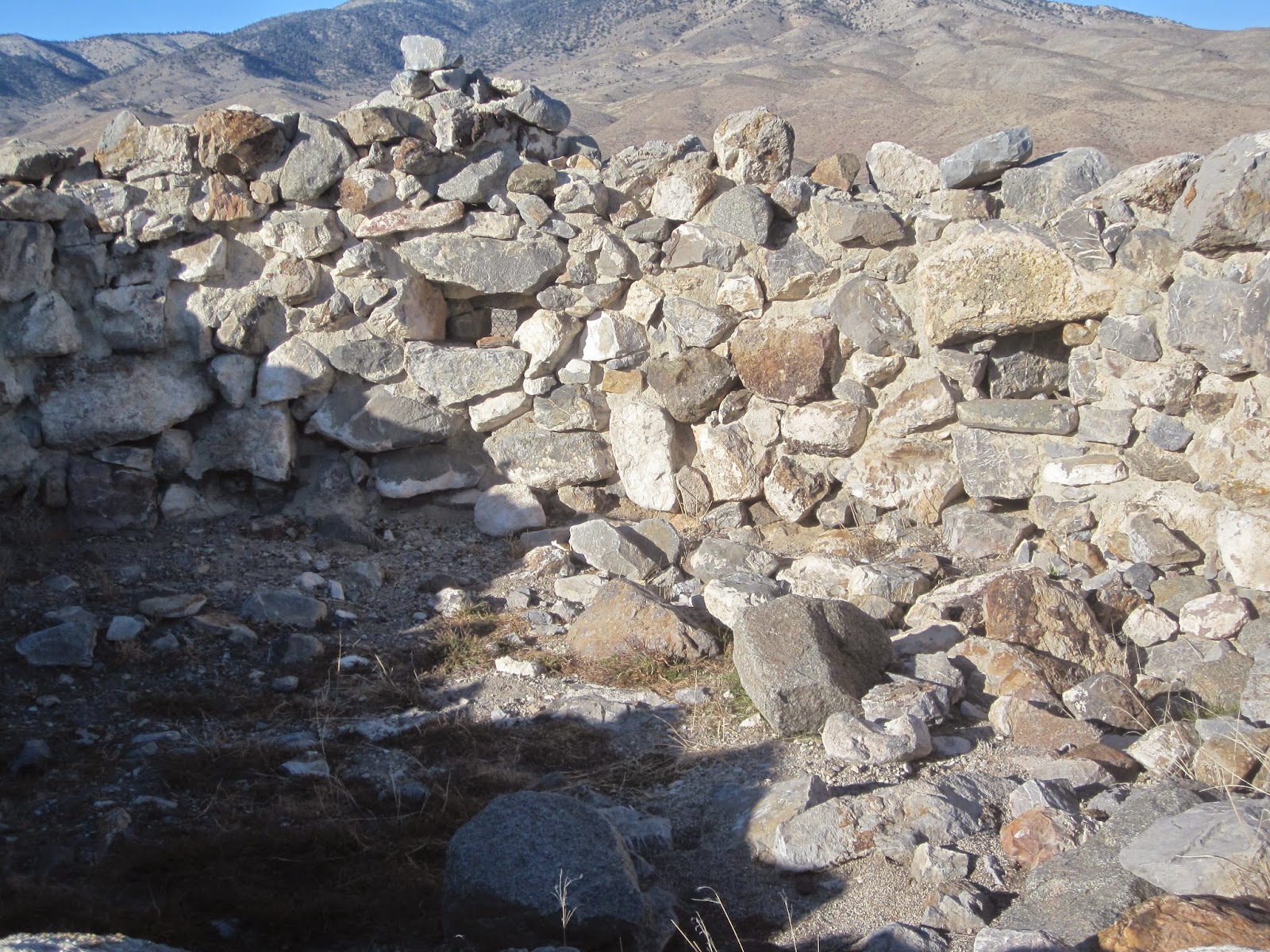 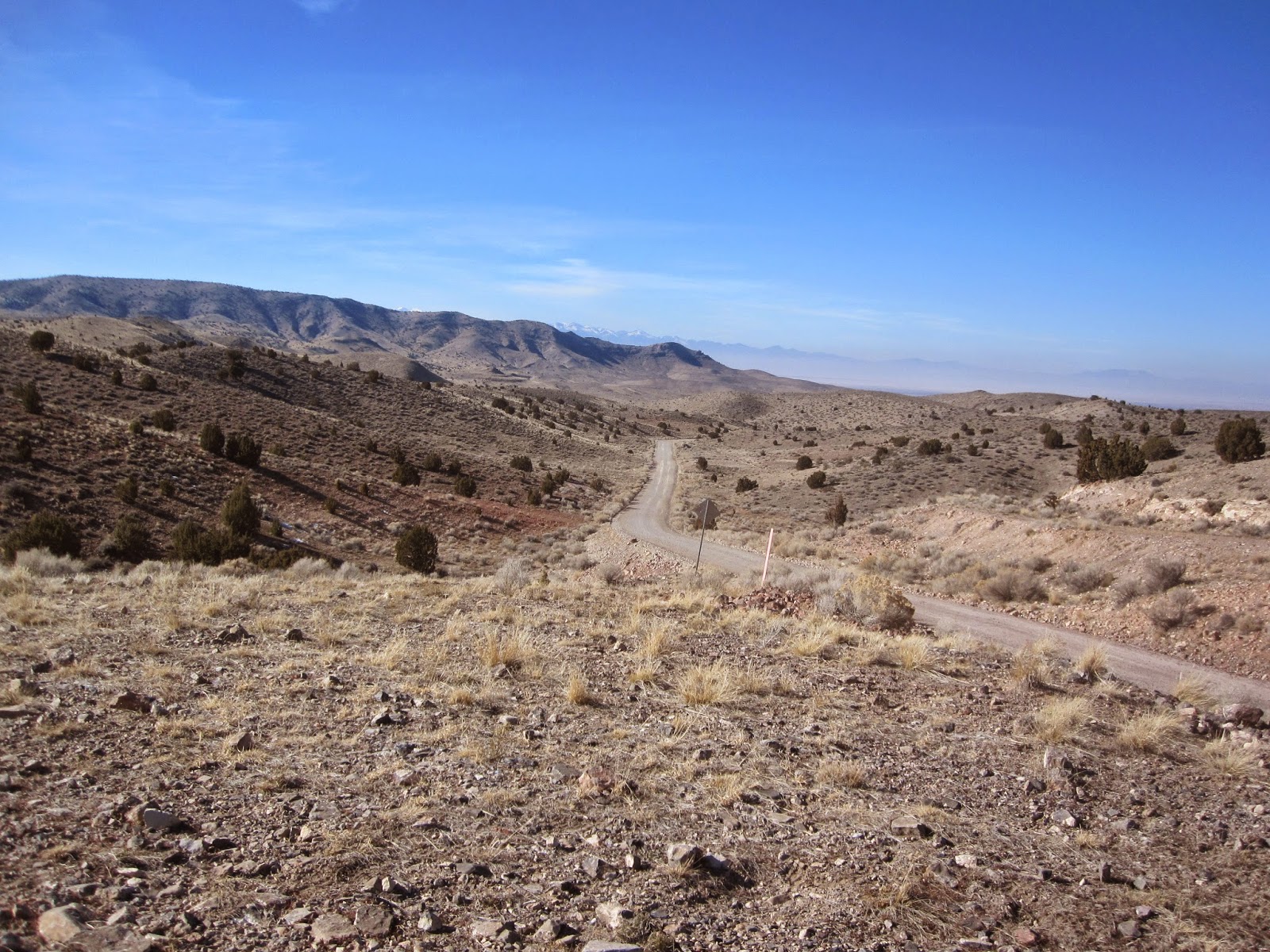 Across this ravine is
*Canyon station* 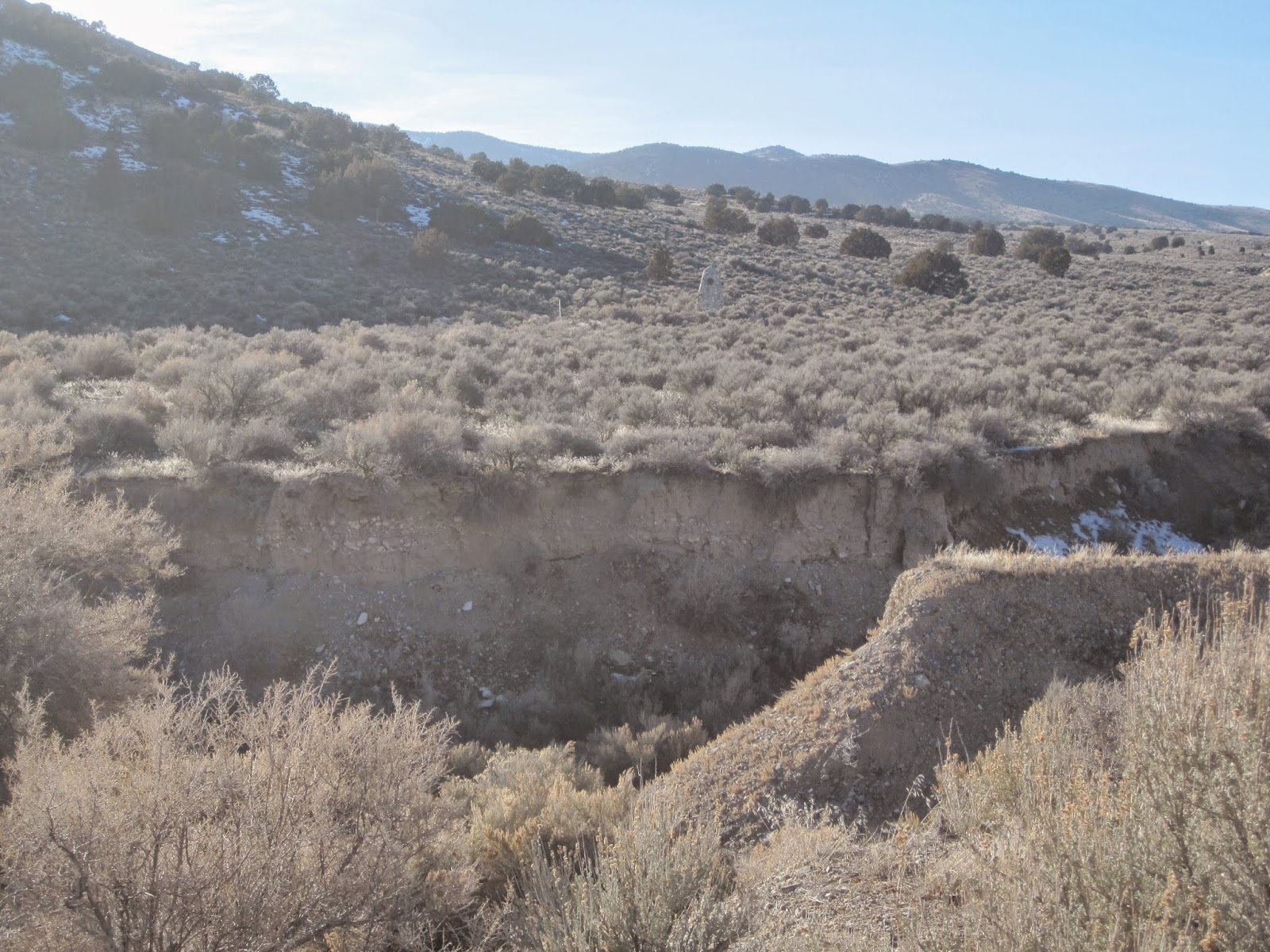 I finally found a way across to get a closer pic of the cairn. 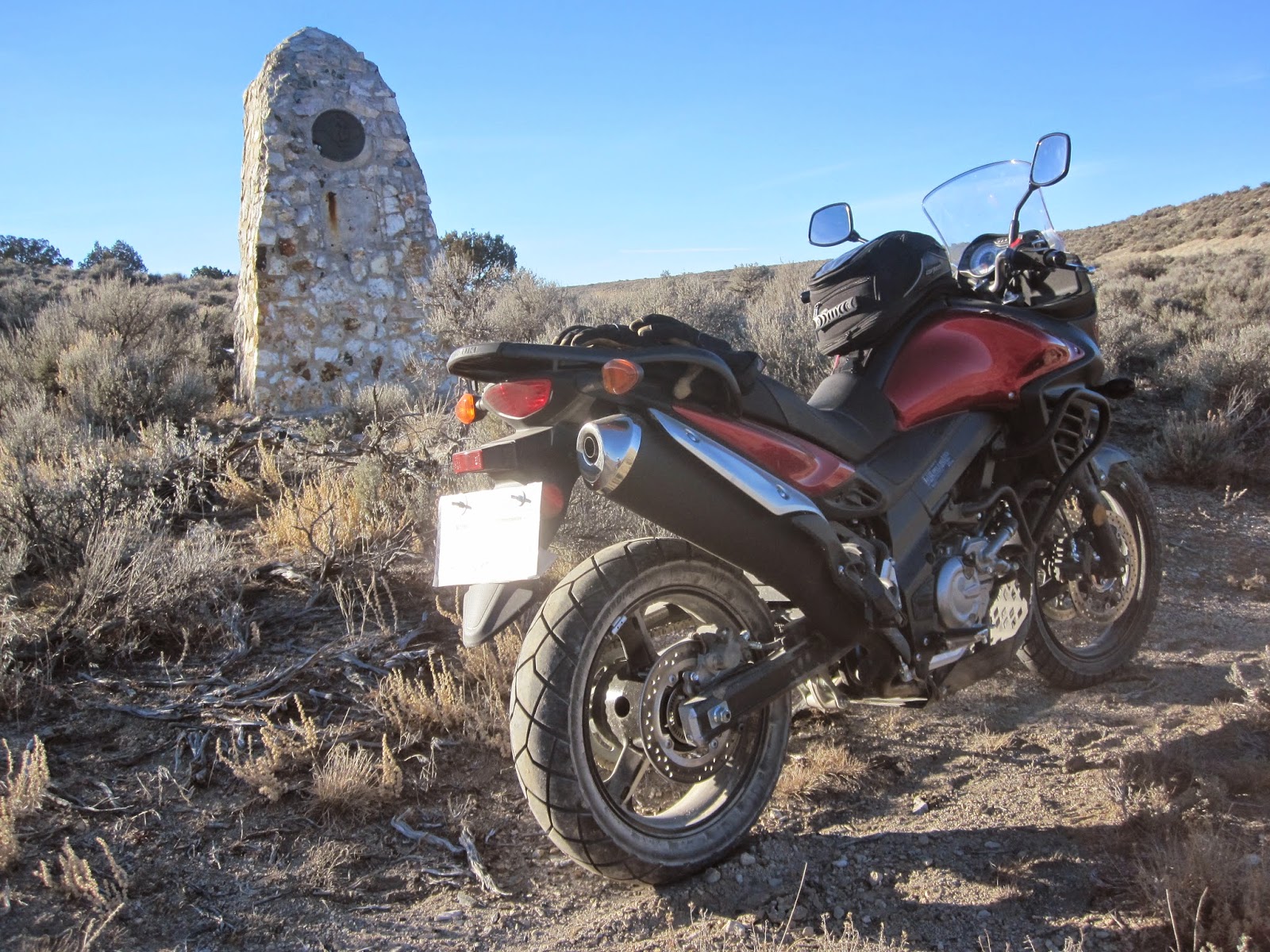 And finally, I'm on my way to the last (if you are westbound) station in Utah. 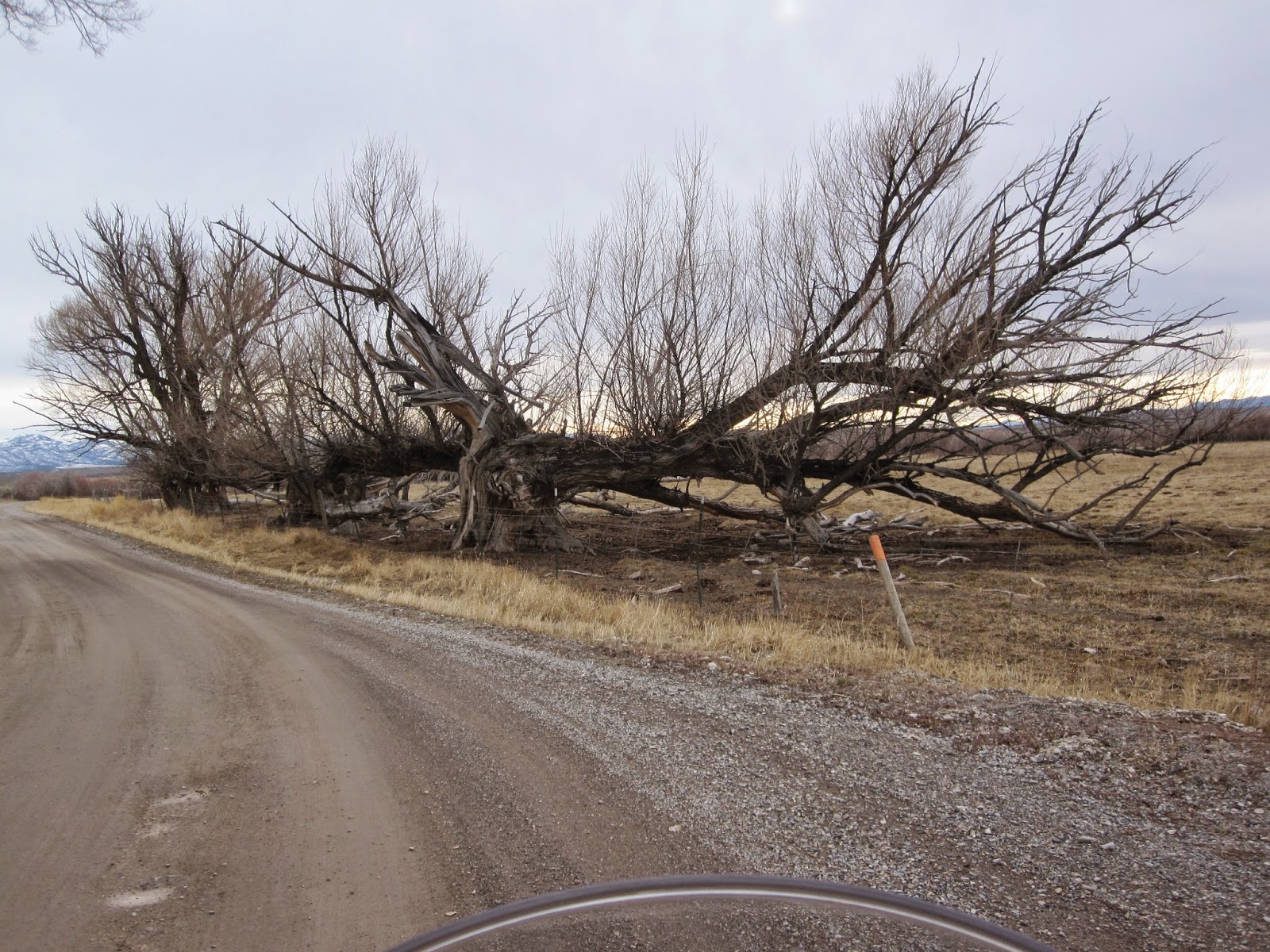 This is the
*Deep Creek station* 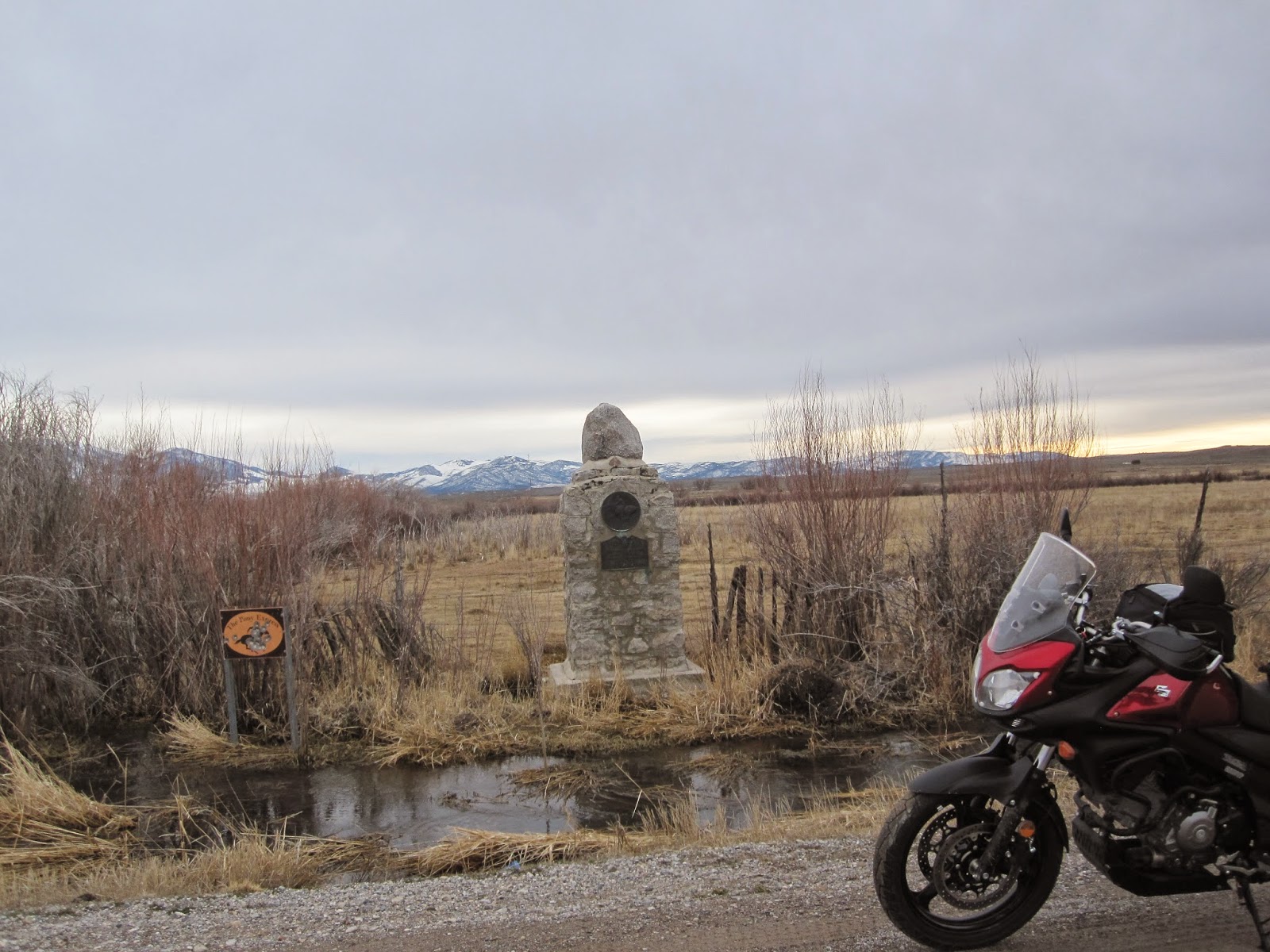 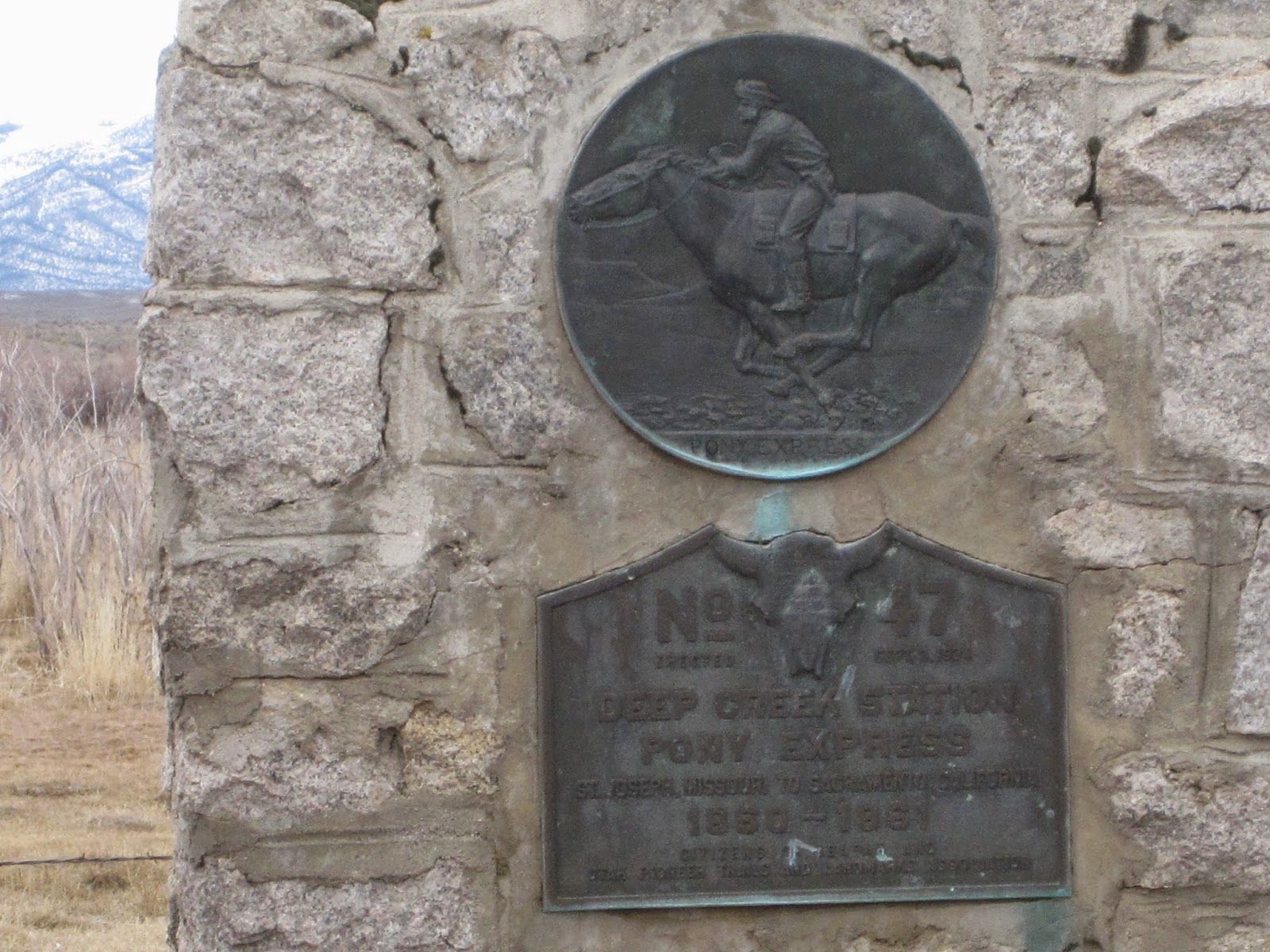 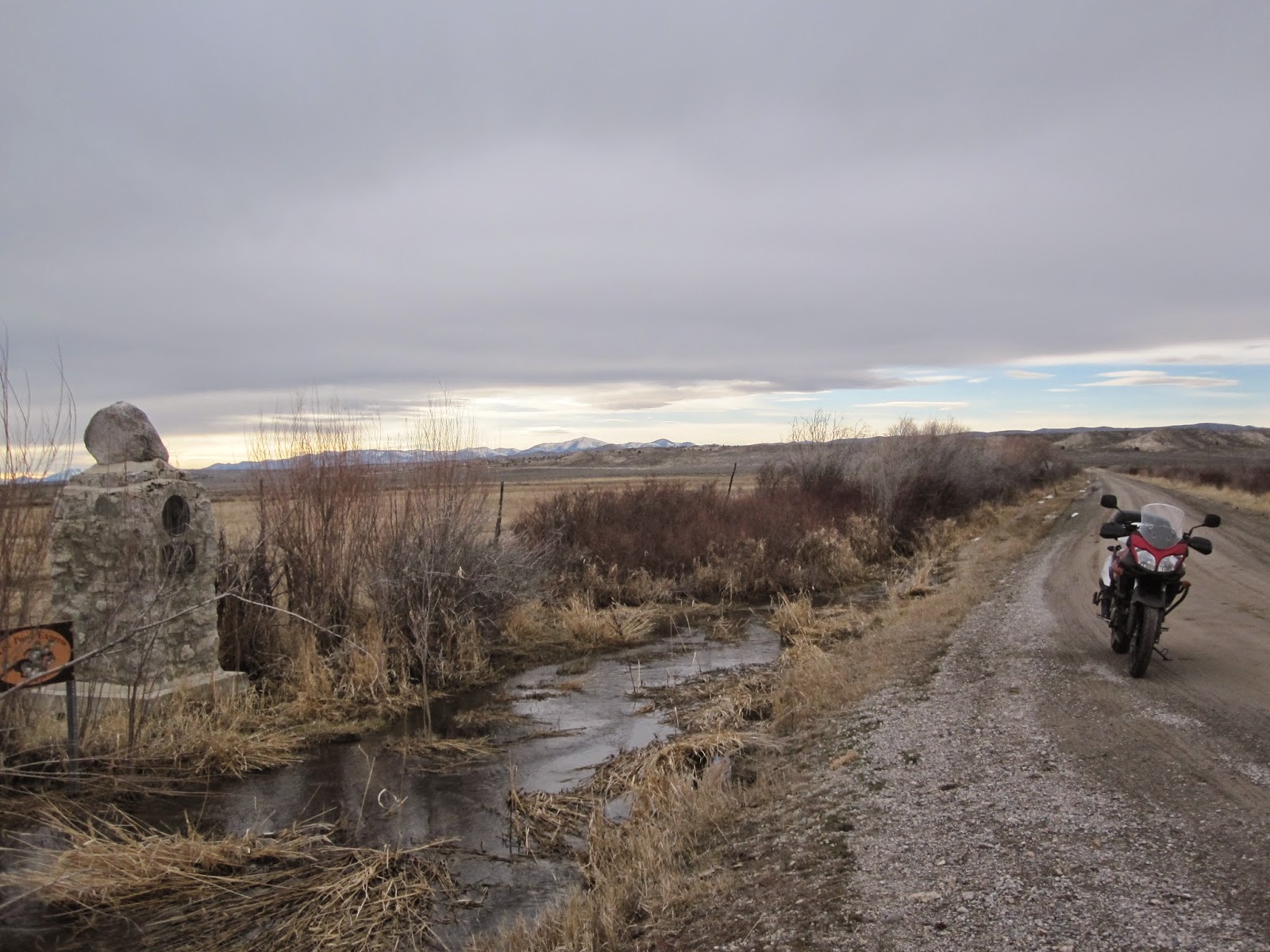 There is some dispute about the exact location of the Deep Creek station, The above and below pictures are about 2 miles apart. Deep Creek station is believed to have been a home station.
This monument (below) is in the middle of a ranch families yard.
In finding these markers I had the opportunity to talk to three Ibapah residents (including the very nice woman who took this picture). All three were so kind and friendly it just might have been the best part of this project. 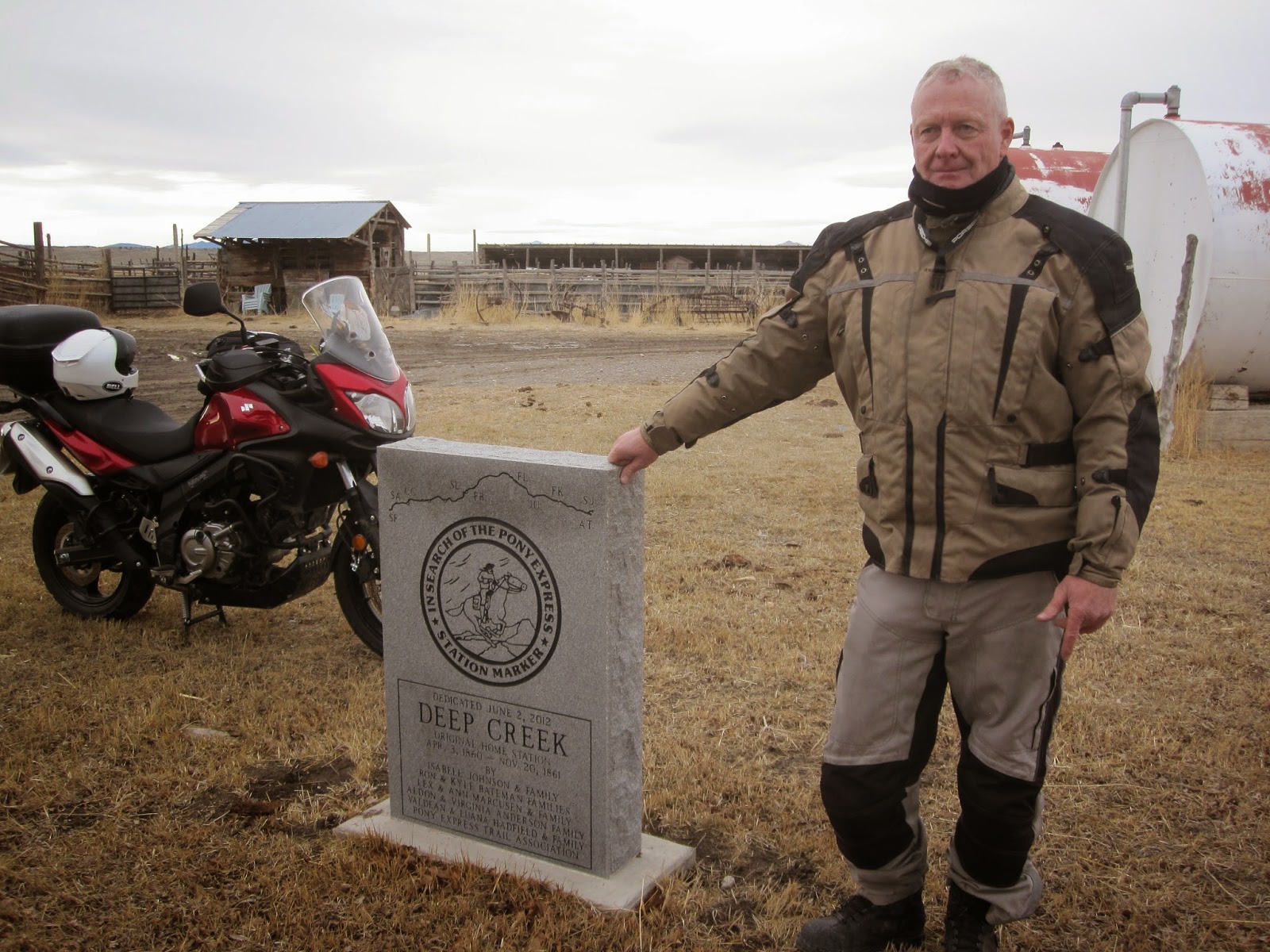 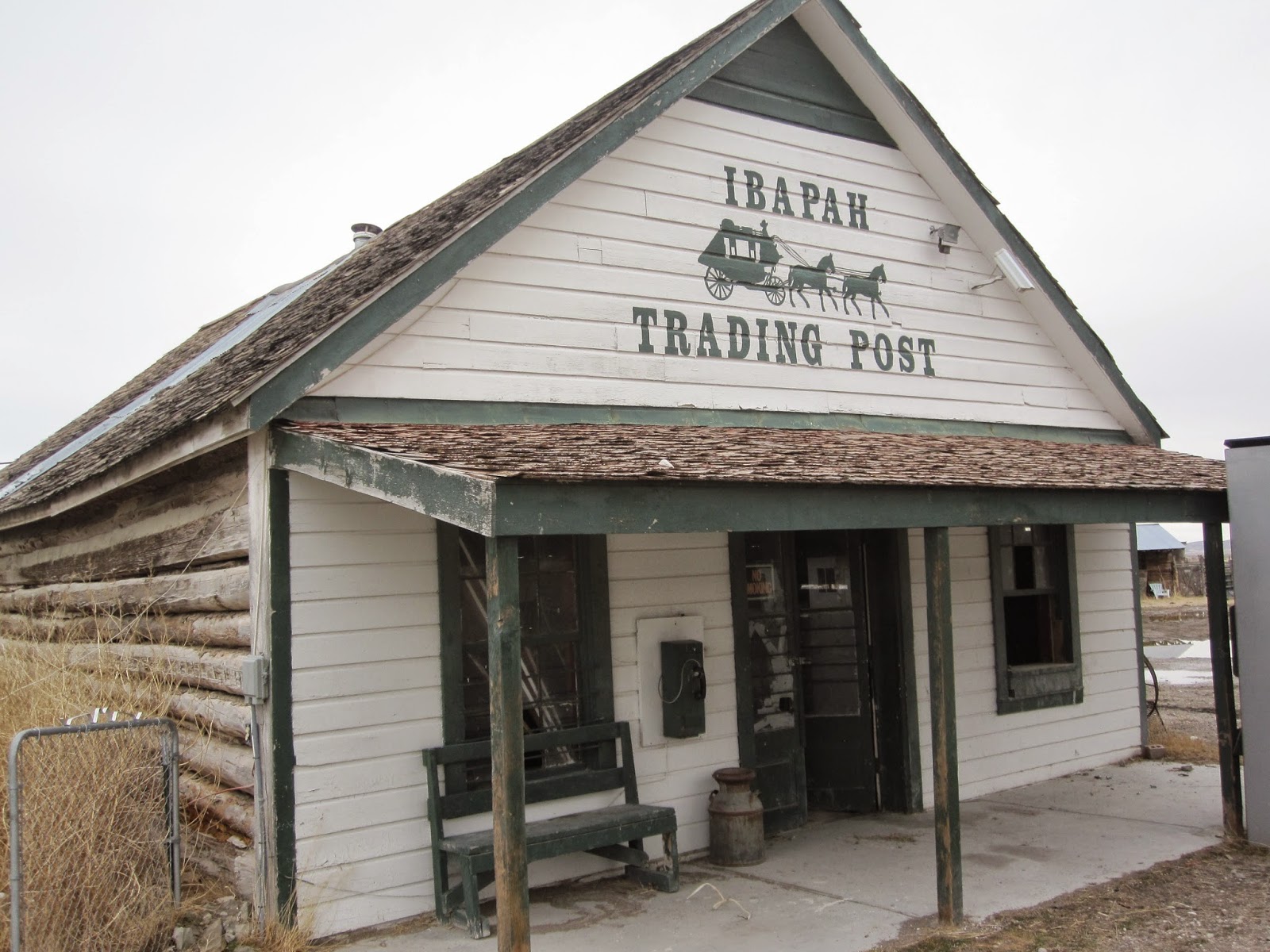 I stop to get a picture of the Utah Tree.... 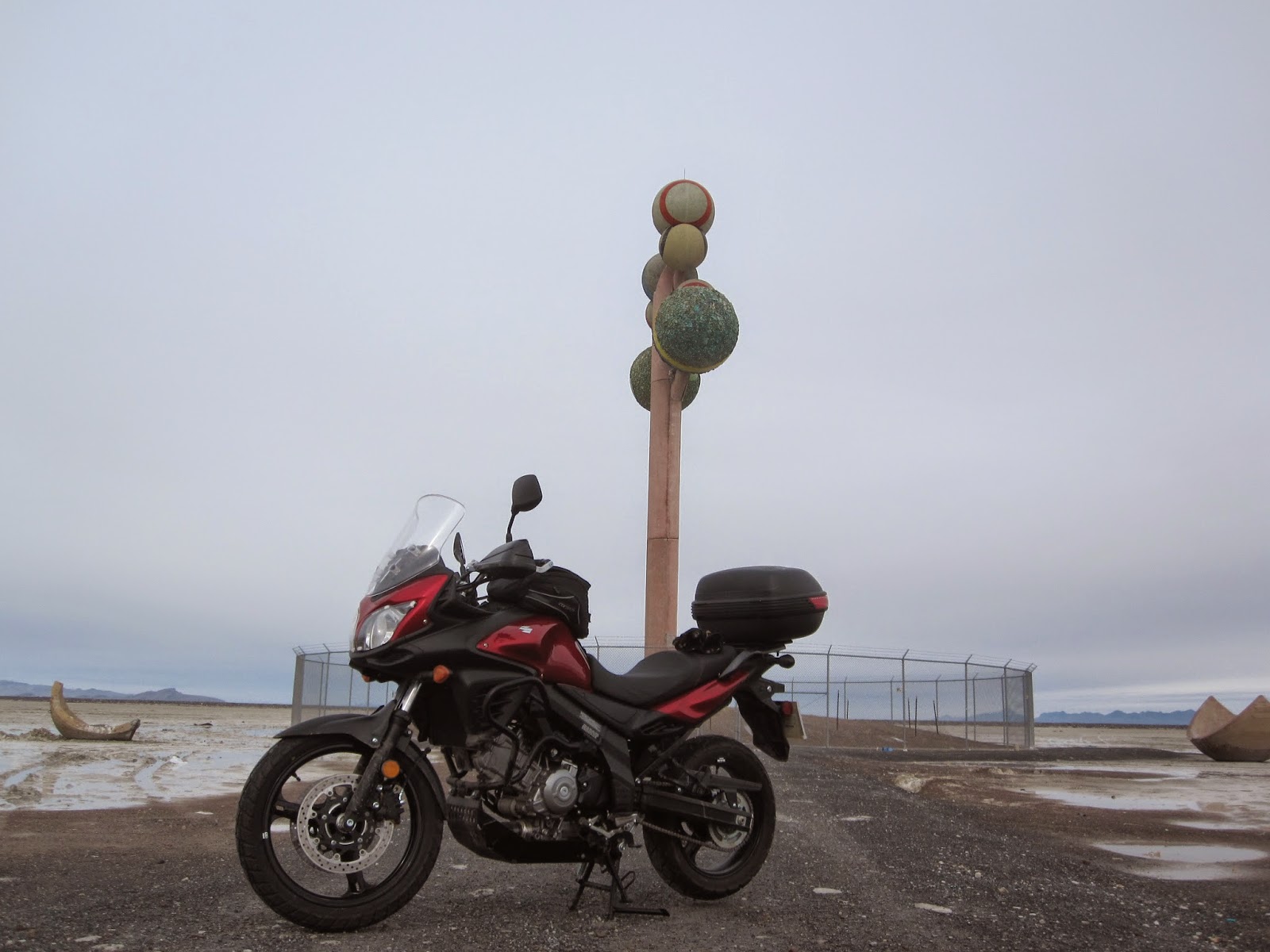 So there you have it, the Pony Express Trail stations of Utah.
I really enjoyed this PET project....get it...... "PET" Pony Express Trail.... PET project..... so anyway I really enjoyed doing it,  not only for the riding part, but learning about the history of the Pony Express in Utah, and the numerous fine conversations with the people I met along the way.
Thanks also to those who shared parts of the ride me to some of the stations, your company was appreciated and enjoyed.

Charles Mabey was Utah's 5th governer in 1920, he penned the following poem;

The Spirit of the Rider

The riders are dead, their ponies dust,
The years have buried the trails they made,
The mouldering posts are strewn with rust
From stockless gun and harmless blade;
Where once the savage lurked in force,
The settler sleeps in his calm abode,
And only the ghost of the rider and horse
Streaks down the path over which he rode.

The riders are gone, their ponies rest;
Nor can the years dim the fame they won.
By glade and pool and on mountain crest
A marker of bronze proclaims anon
How man and steed in the days of old
Carried the mail over plain and hill,
And only the shade of the rider bold
Can tell the tale with the the rider's skill.

This has been a great series, thank you!

Thanks for reading and commenting Richard!

Thanks for posting. Something as a tourist I'd never think of!

I just learned that an ancestor's brother was a Pony Express rider here in Utah so it piqued my interest to visit the stations. I found your blog and loved it! Thank you for taking the time to share your info. You don't mention where you lodged or where you fueled up for your trips. Did you do day trips? How did you do with fuel? Just curious in case I want to replicate your trip. Thanks, Paul

rpp/Paul - Thanks for reading my blog. My lodging was 'home' as I live in West Valley it was fairly easy day rides to both ends of the PET. As for fuel, the third part of my PET ride was the least fuel friendly. But my bike had a 200 plus mile range so I filled up in Stockton then bagged the remaining stops and easily made it to Wendover for fuel.
If you do make the PET trip, I would be interested in hearing about it went for you.
Safe travels!
Ken