And it was still daylight when I arrived at the KOA in Crescent City I checked in and quickly unloaded at my cabin. 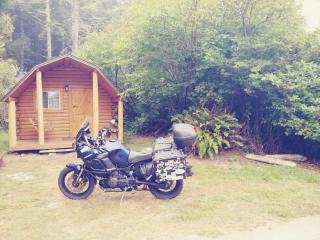 And of course the ubiquitous and incredibly fetching banana slug..... 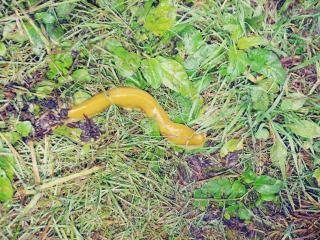 I soon saw old friends and met new ones. 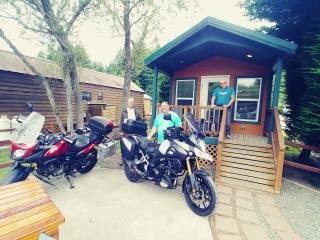 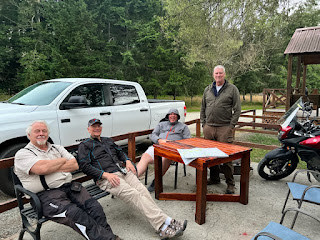 Chad had purchased some firewood so we could sit around a campfire and BS the night away. A perfect way to end a long day in the saddle.

At some point someone left a beautiful sculpture of rocks on Chad's porch. The talent at these events is simply amazing!

(Thanks Chad for the picture) 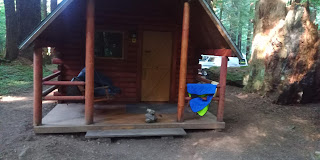 There were a few folks that I didn't get to meet...... (haha)
(thanks Len for the picture) 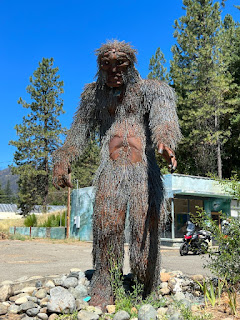 MotoBill has a new bike since the last time I saw him... He tells me that when someone purchases a new KTM the dealers give them a free dog... 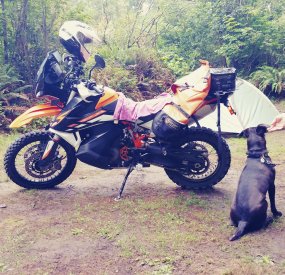 Amid loads of laughter and BSing the time sped past quickly. Then at some point during the rally I realized my planning was faulty. If I was to make my next reservations I would need to leave the Rally a day early.

Sooo that's what I did, departing the KOA to ride the gorgeous Gazelle-Callahan road. Then I grab a hotel, and the next day I make it to my reservation in Windsor, Cal a few hours before dark... whew! I'm back on schedule.

(and yes I agree. Schedules and reservations aren't the best way to travel on a motorcycle - But...I found it necessary to have a plan when doing something like the Triple Crown)

From Windsor I'm able to check off the remaining Missions (5) from the list. At one of those Missions, Santa Clara, I met this Father and Son duo.

John, and the Father of John (the dad's name was beyond my grasp)

The Father of John shared some great information about the missions and other things. I REALLY enjoyed talking to these two gentlemen!

The Father of John also offered to give me a blessing before we departed, of course I accepted his offer. The blessing was very nice and I felt at Peace for the rest of the day. 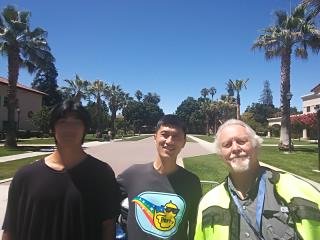 Departing Windsor I point the bike toward Solvang, Cal.

It is on the way to Solvang that I completed the last check mark for the Triple Crown!!  Woohoo I'm done!

The view out of my Solvang lodging leaves a little to be desired....to be fair, I'm sure it would be a LOT greener if not for this historic  drought that is happening.

Green or not, my stay at Solvang was very relaxing! 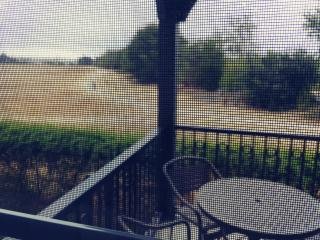 Then I ride to Big Bear Lake for one night....which now should be called the 'big bear muddle puddle' because it is so low.

Leaving Big Bear I stop at Cafe 247 an irreverent and totally enjoyable place to eat. Its at the intersection of Ca18 and Ca247 near Lucerne.

I got the breakfast burrito and couldn't quite finish it.... 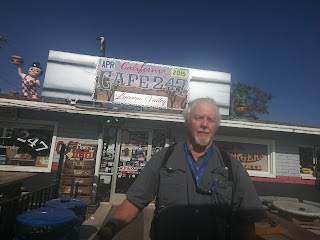 No pix from me the rest of the way as now the horse is headed for the barn.

From Big Bear I ride across Death Valley NP in 122 degrees and arrive,  feeling very much melted, at Pahrump. An hour or so after getting into my room at Pahrump, the Heavens opened and POUNDED  the dusty ground with huge drops of rain. Soon after  those huge drops of rain gathered and started flooding stores and homes in Pahrump, as well as Vegas and other surrounding towns.

(Thanks Len for the picture) 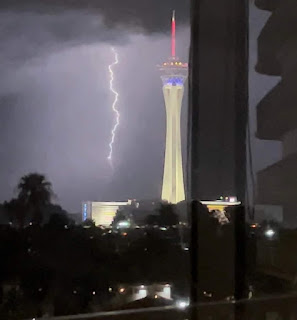 From Pahrump I had planned to ride home via Las Vegas, but the news reported so much flooding in Sin City I decided to take the longer way home via Tonopah.