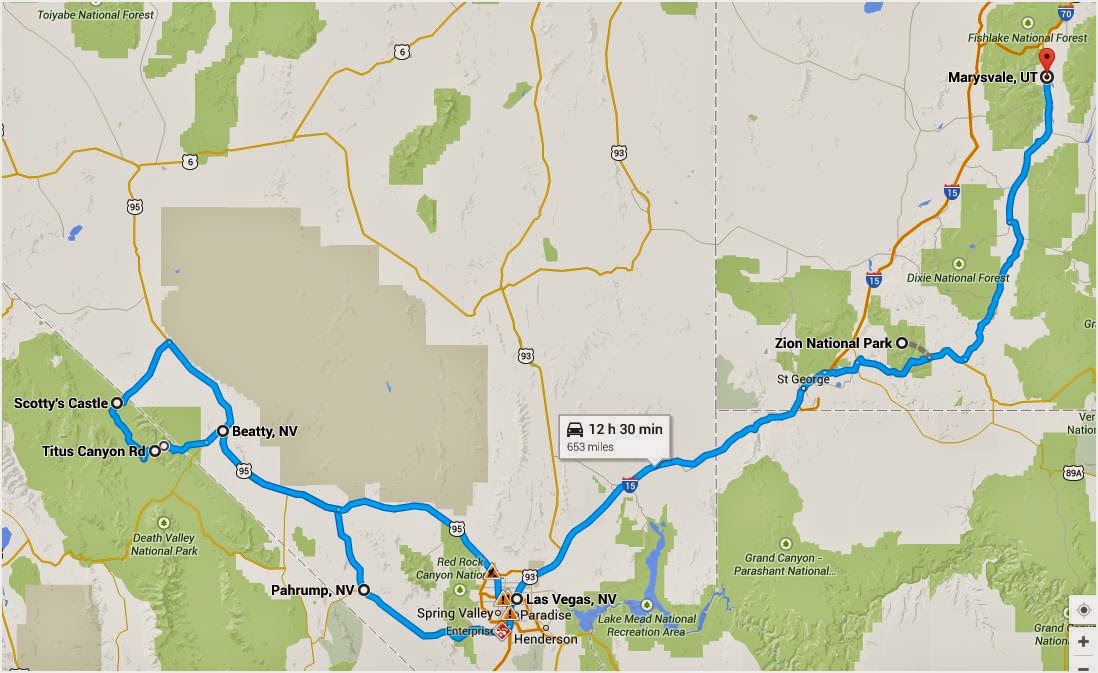 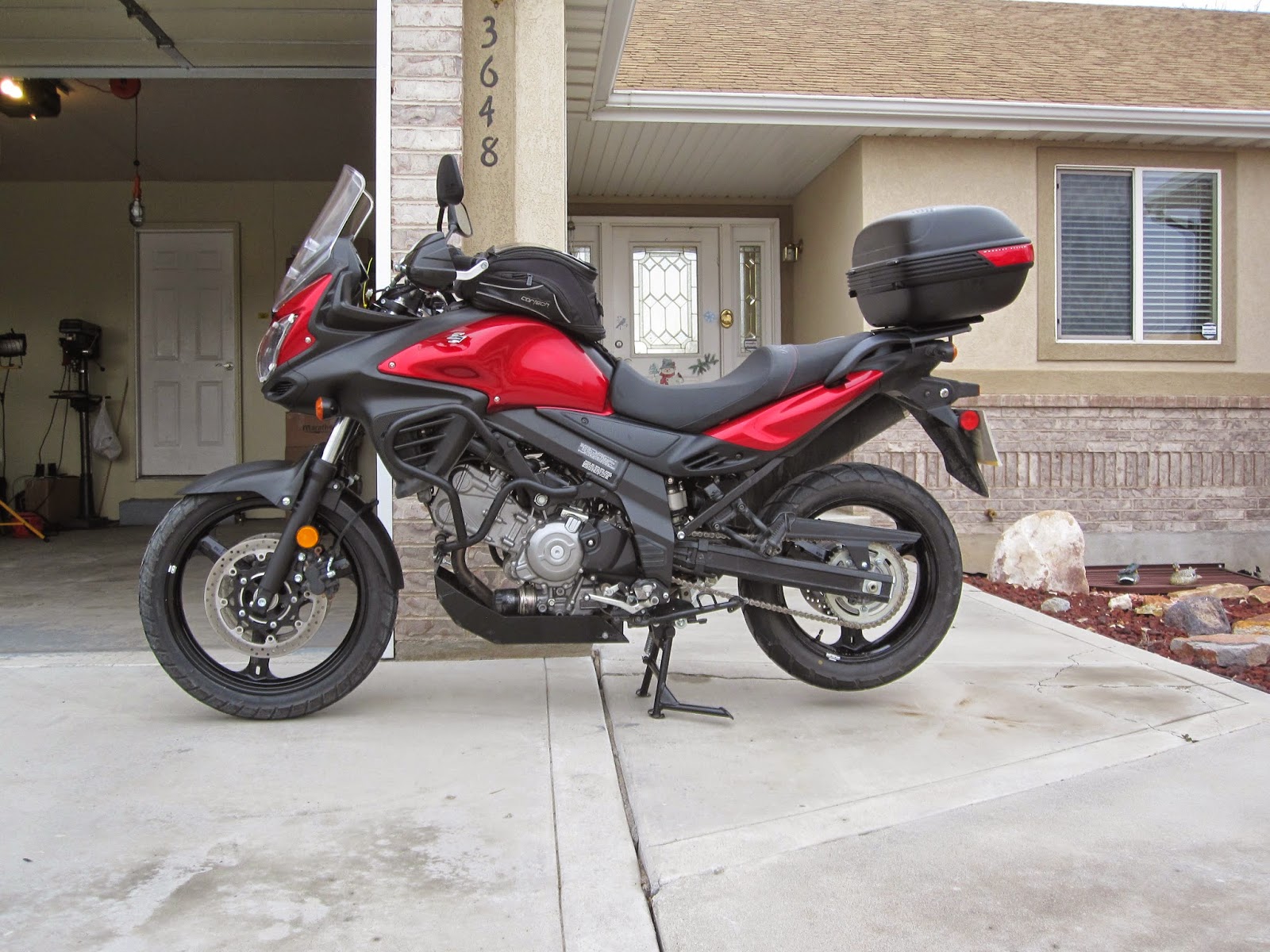 She's a true ginger because all her red paint matches.
I'll give a better introduction when I receive the last of my ordered farkles and get them installed.

Strom Buddy Adrian and I decide to take a weekend ride to Death Valley.
We meet Friday at Lehi Crossroads Chevron and make the 460 mile ride to Las Vegas. 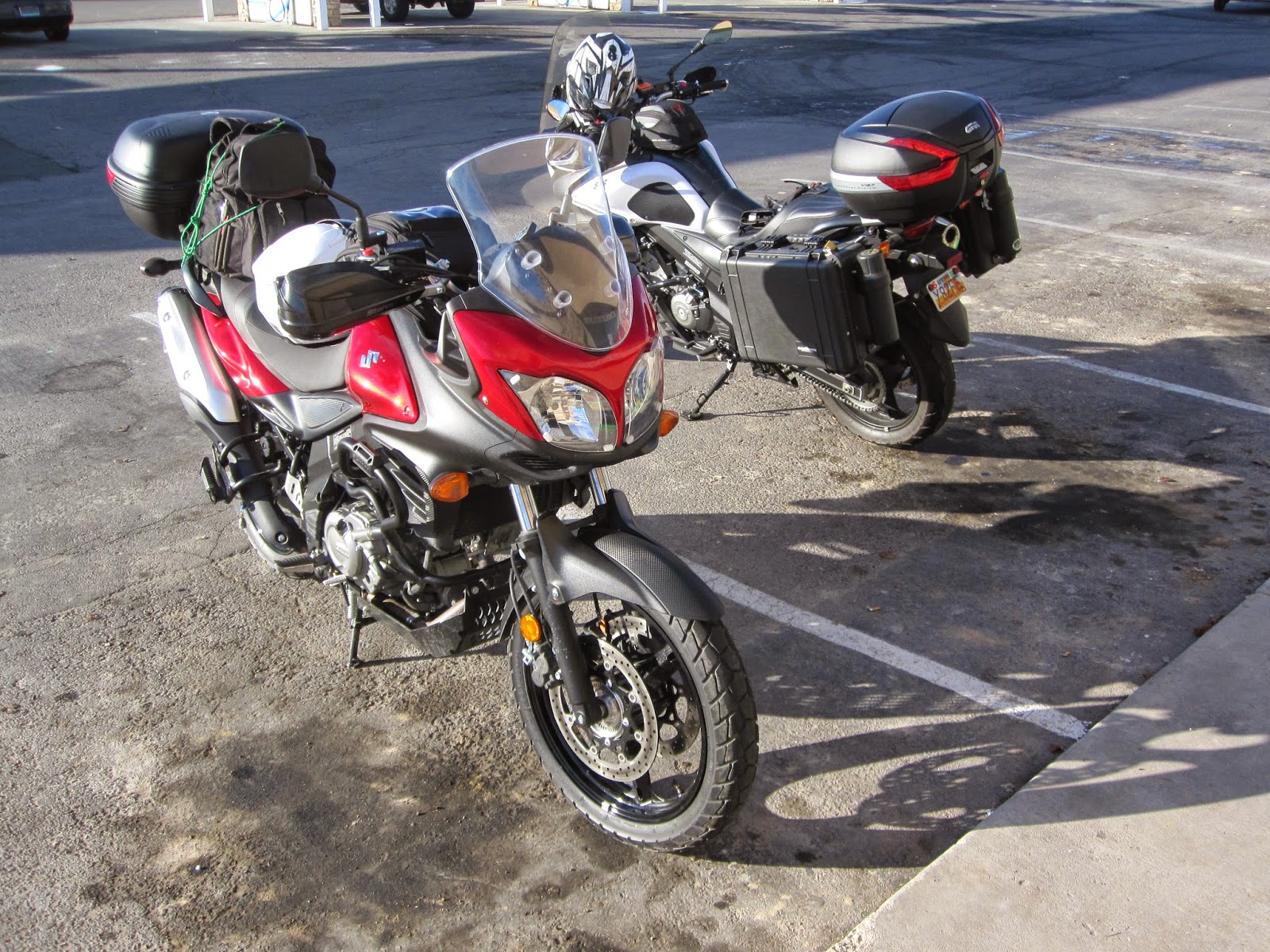 The next day, Saturday, we're off to see Scotty's Castle near Death Valley.
Entering Pahrump, Nevada we see this classic. Alfa Romero ...I think... What a beauty!!! 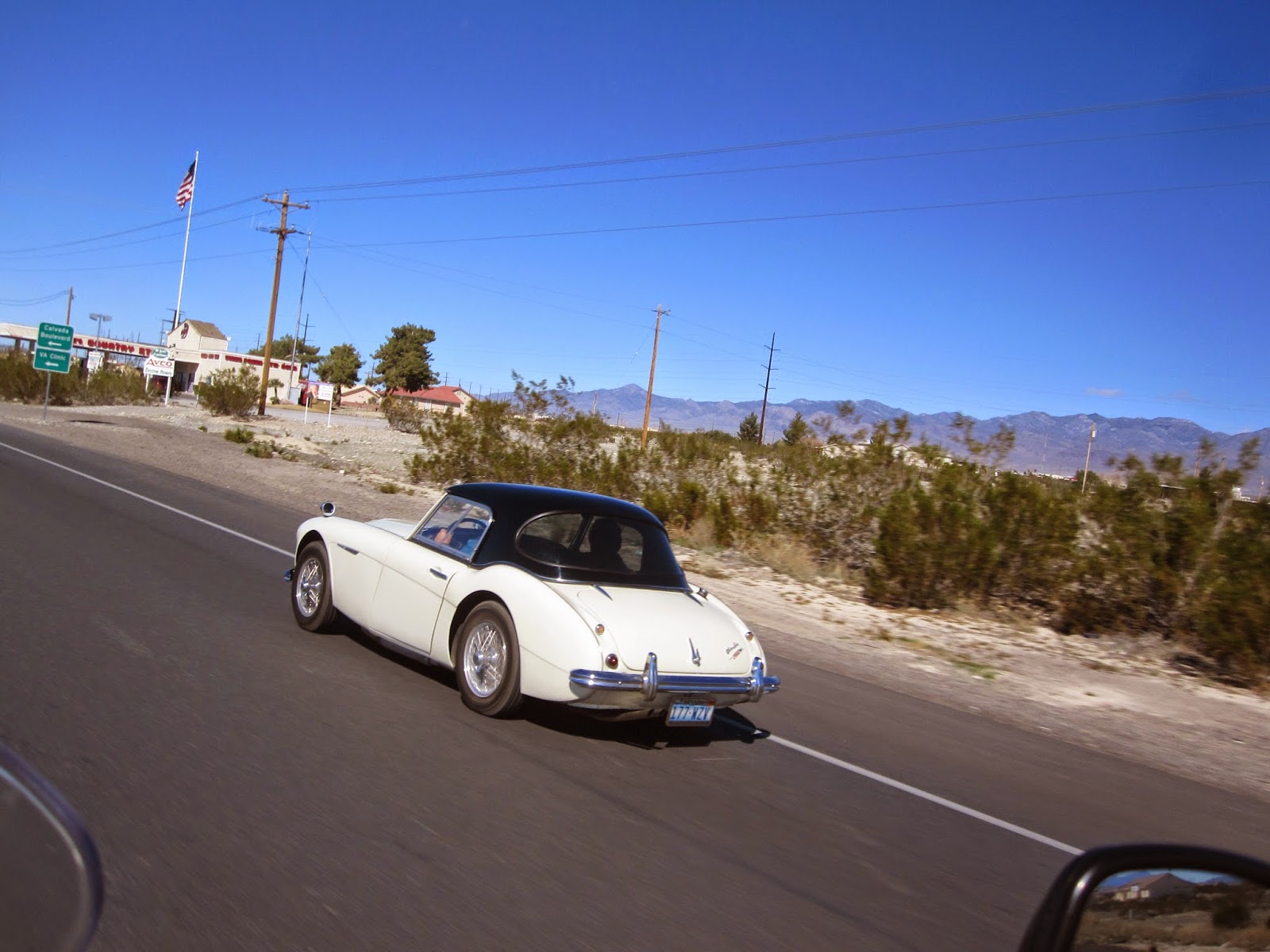 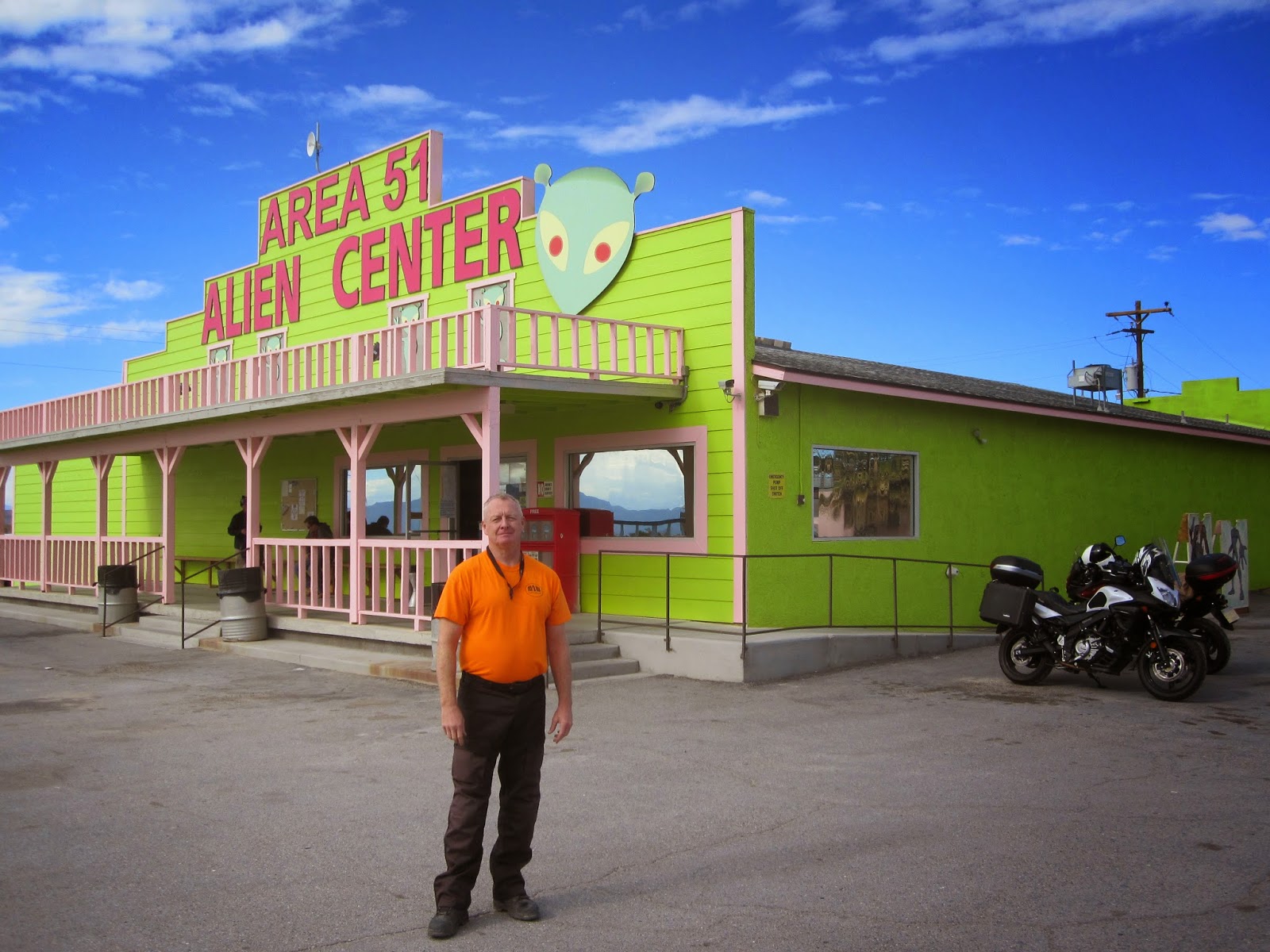 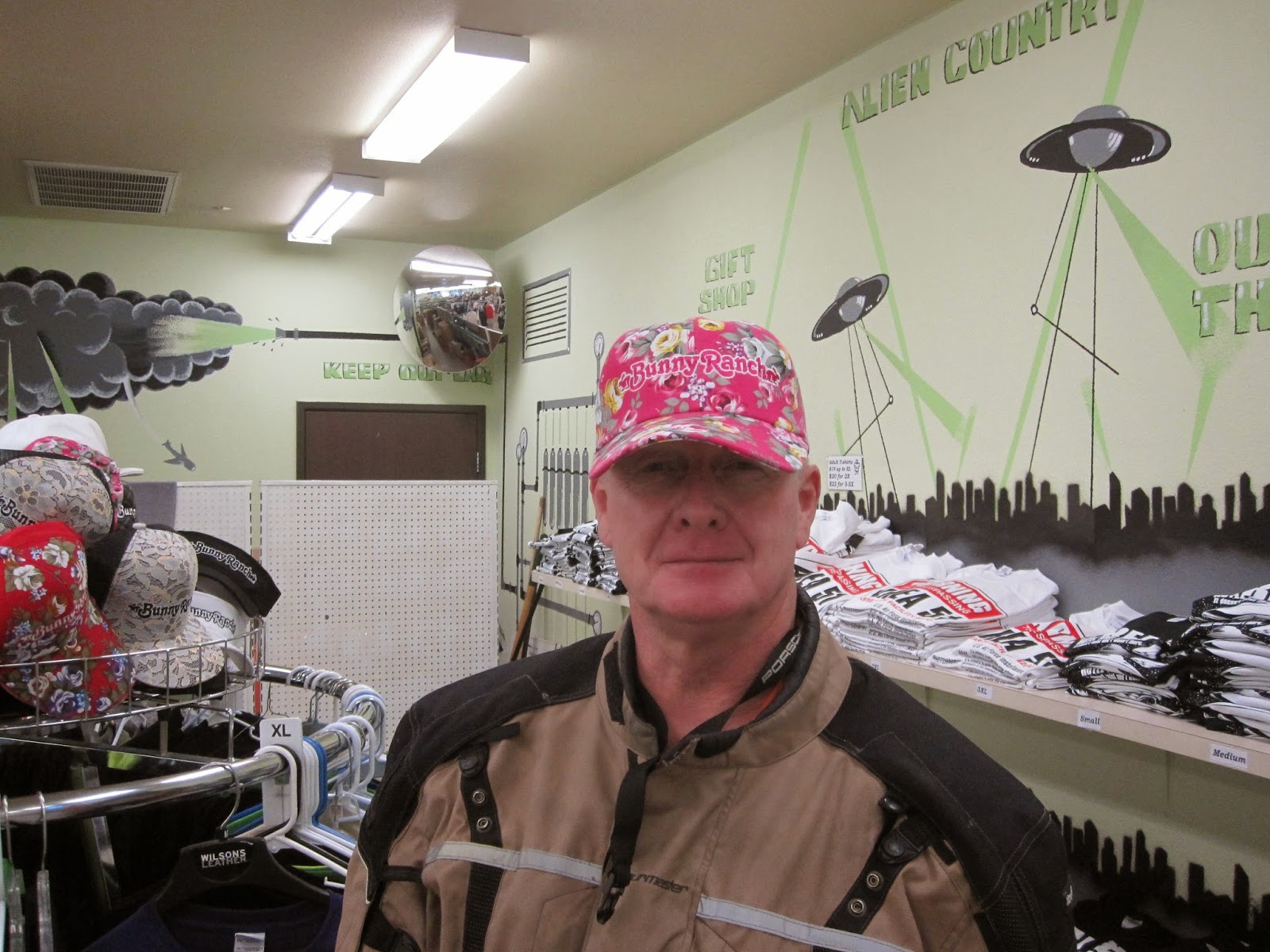 On the road again...we stop at another brothel when we see this plane.

Adrian does some research and finds this;
In 1978, Fran, the owner of Fran’s Star Ranch & Brothel in Beatty, NV sent letters to pilots and jumpers across the west announcing that she was going to put a mattress in the center of a large star painted in the parking lot and any jumper who could hit the mattress would win a free night with a lady of his choice. On the day of the event, Fran’s ladies were lined up along the runway waving like beacons dressed in spiked heels, fish-net stockings, G-strings, black lace bras, rhinestone chokers, and long capes blowing in the strong wind. The sky was crowded that afternoon as Buster, along with seven passengers, all ready to party, banked his twin Beech D-18 in a circle around the field, adjusted his throttle, trimmed his propellers, lowered his landing gear, put his flaps down, and began his final descent.
The twin Beech is a notoriously complicated aircraft to fly, especially so when landing in a crosswind. Buster would have noticed this if he’d been watching the wind sock. Instead he was gawking at the ladies, his attention only forced back to the runway at touchdown when the crosswind started to weathercock the plane around. He reduced power on his down wind engine, frantically trying to regain control of the aircraft when he realized that he’d forgotten to lock his tail wheel down. The landing gear crumpled and the plane spun like a dust devil toward the edge of the runway, clipped a high line post, and settled in the sage as the ladies watched on.
Even though the Beech was a total loss, the passengers survived. A couple of weeks later, Buster returned to salvage the engines and other valuable parts. Fran, who had noticed increased traffic, decided that a crashed plane was good for business and agreed to leave the stripped fuselage where it landed. In 1997, she sold the brothel to Mack and Angel Moore.
Former owners of a chain of funeral homes and active Christians, Mack and Angel see the brothel as a way to help ease suffering. Dave, a long haul trucker and one of the rare customers willing to talk, said,” It’s a lonely life out here on the road and you need to find a place where you feel welcome.” Just after Mack and Angel bought the place, they changed the name to Angel’s Ladies Brothel but they kept the plane which has become a landmark along highway 95. davidlayne 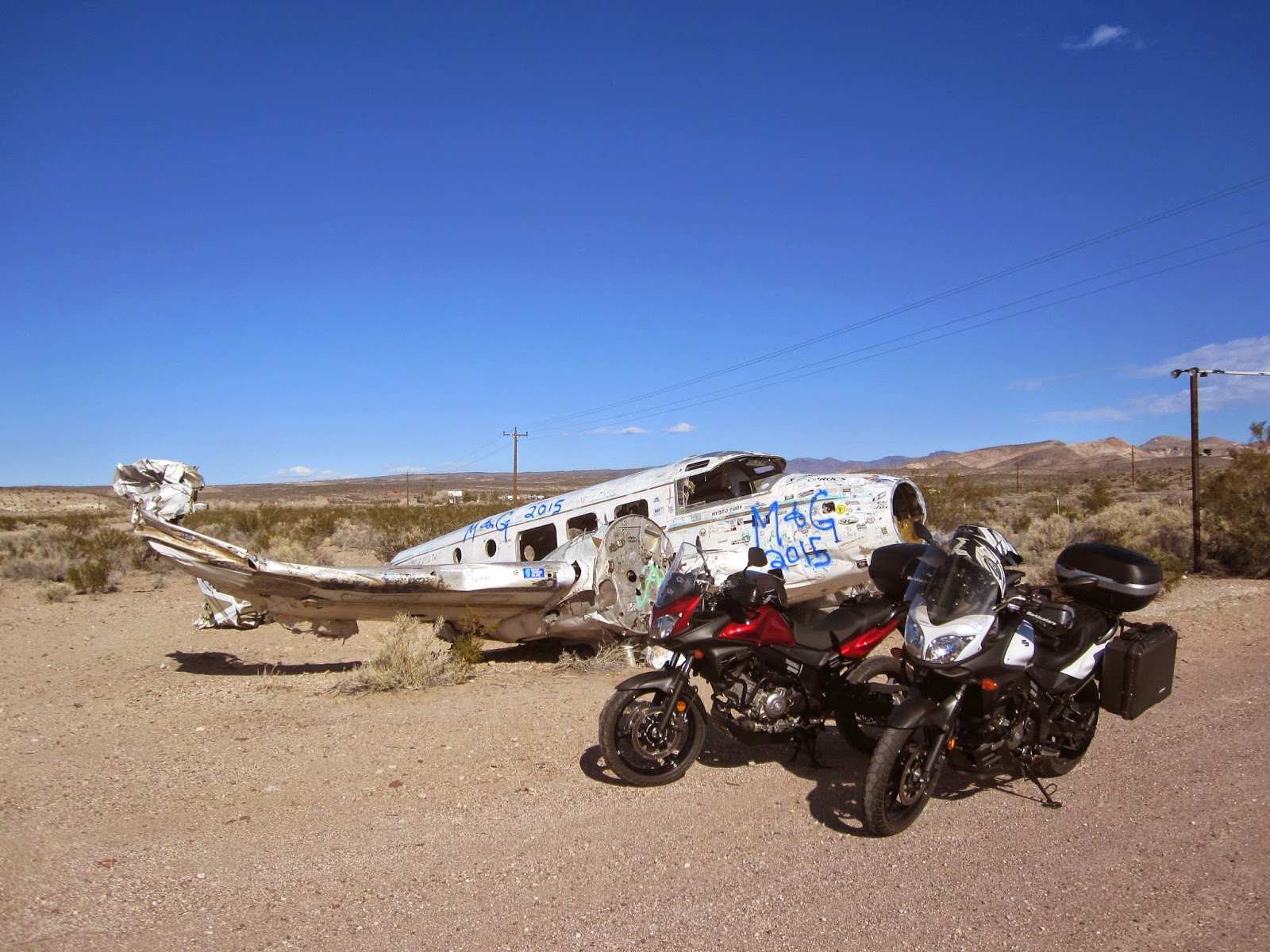 Adrian tries to start the engines, but they won't catch... 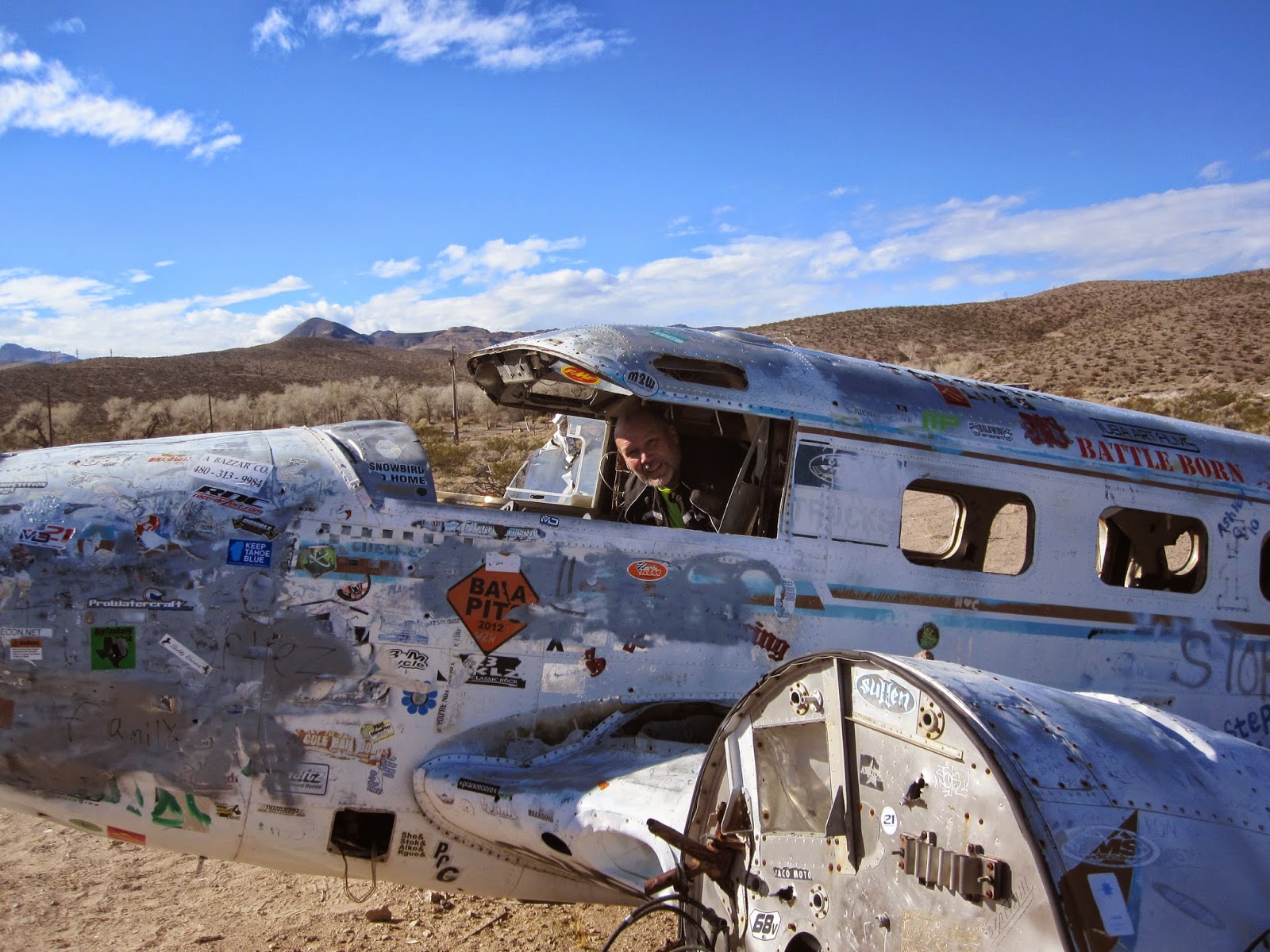 Weary of brothels we continue our ride to Scotty's Castle. 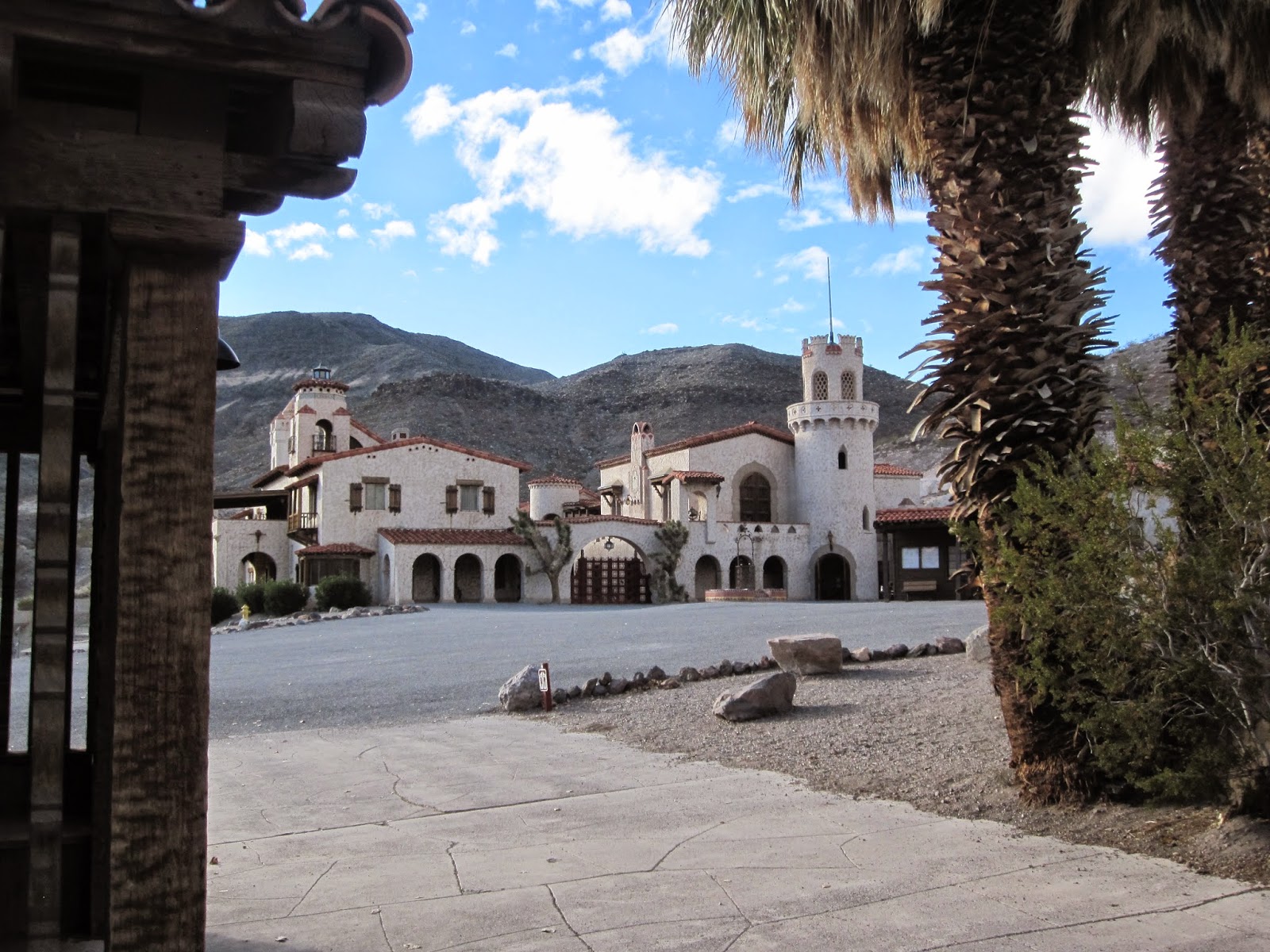 Construction began on Scotty's Castle in 1922, and cost between $1.5 and $2.5 million. Prospector, performer, and con man Walter Scott  also known as “Death Valley Scotty,” convinced Chicago millionaire Albert Mussey Johnson to invest in his gold mine in the Death Valley area. Though initially angered when the mine turned out to be fraudulent, Johnson was fascinated with the colorful Scott and the two men struck up an unlikely friendship. By 1937, Johnson had acquired more than 1,500 acres (610 ha) in Grapevine Canyon, where the ranch is located.
- Wikipedia

One of Johnsons Packards. 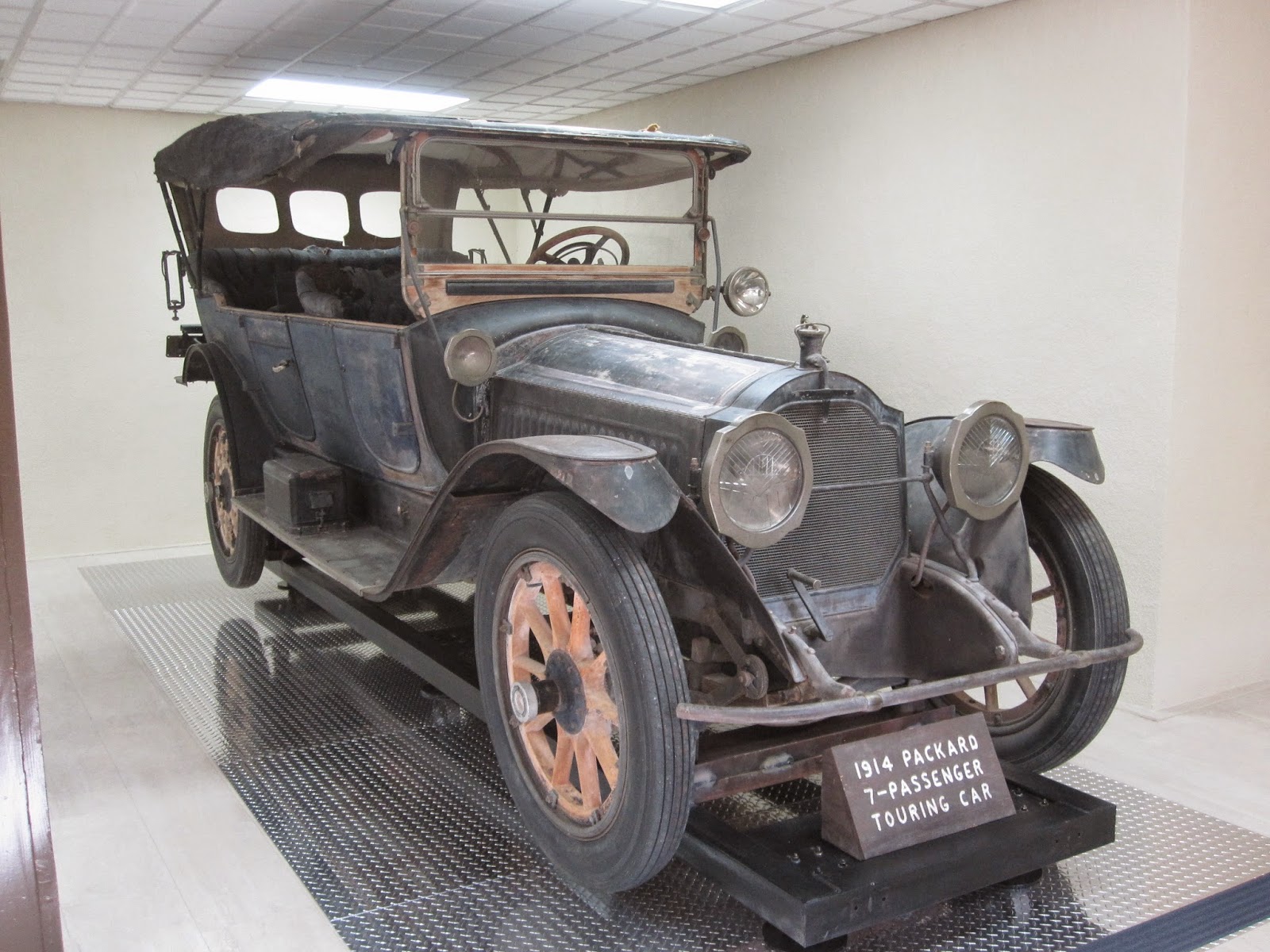 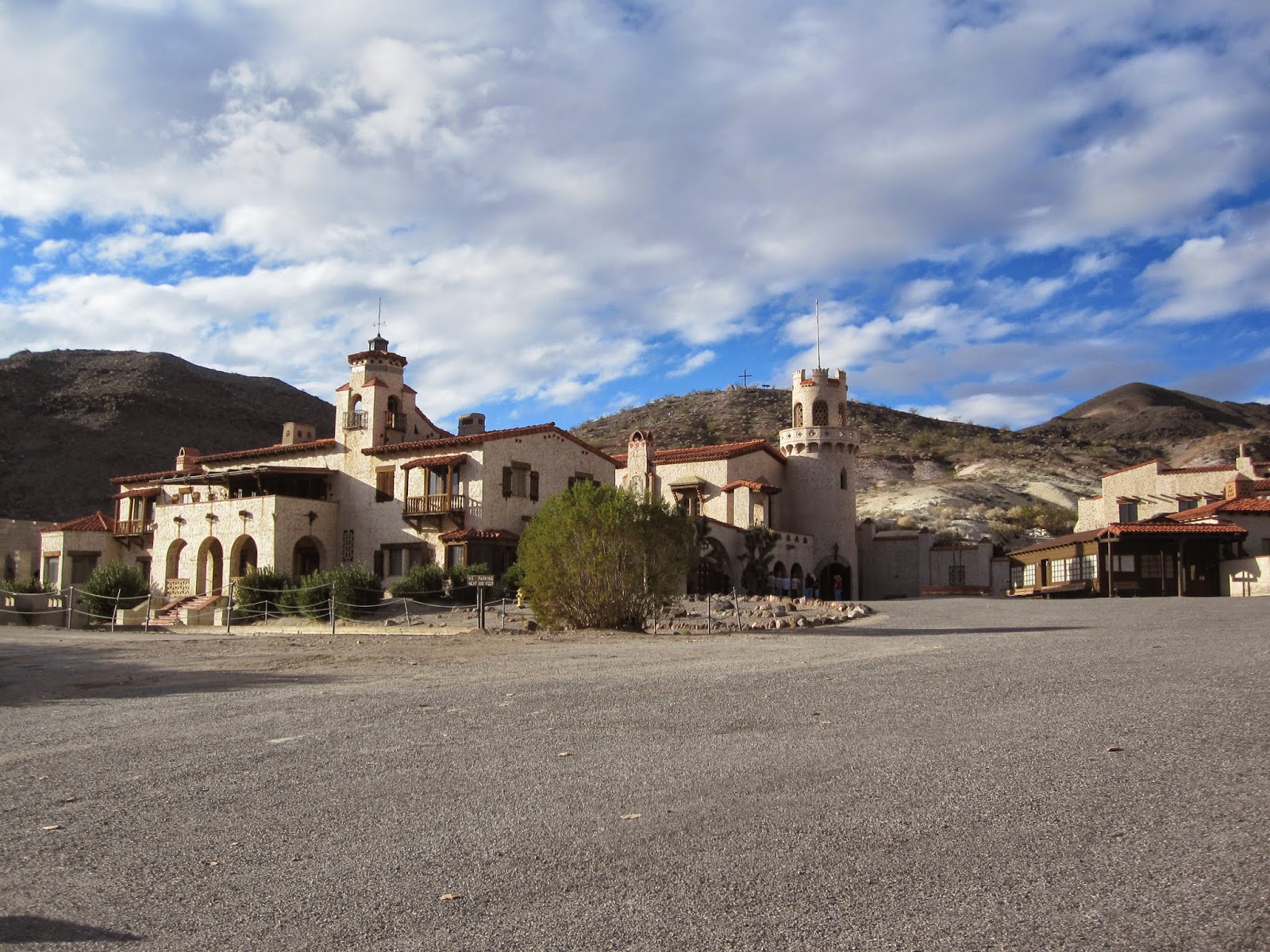 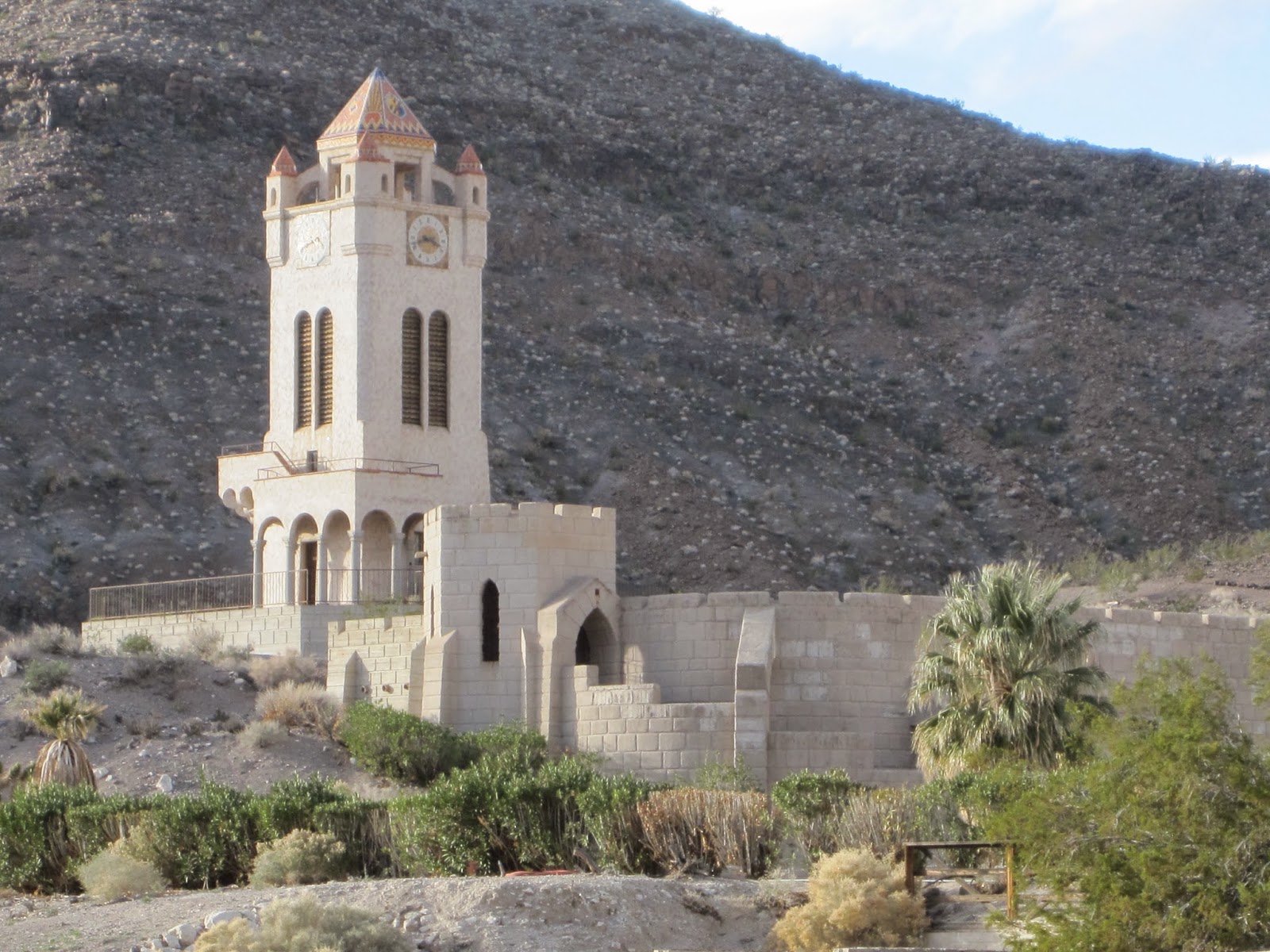 More Wikipedia;
Unknown to the Johnsons, the initial survey was incorrect, and the land they built Death Valley Ranch on was actually government land; their land was further up Grapevine Canyon. Construction halted as they resolved this mistake, but before it could resume, the stock market crashed in 1929, making it difficult for Johnson to finish construction. Having lost a considerable amount of money, the Johnsons used the Death Valley Ranch to produce income by letting rooms out, upon the suggestion of Scott. The Johnsons died without heirs and had hoped that the National Park Service would purchase the property, and in 1970, the National Park Service purchased the villa for $850,000 from the Gospel Foundation (the socially-oriented charity Johnson founded in 1946), to which the Johnsons had left the property.[3]
Walter Scott, who was taken care of by the Gospel Foundation after Johnson's passing, died in 1954 and was buried on the hill overlooking Scotty's Castle next to a beloved dog. 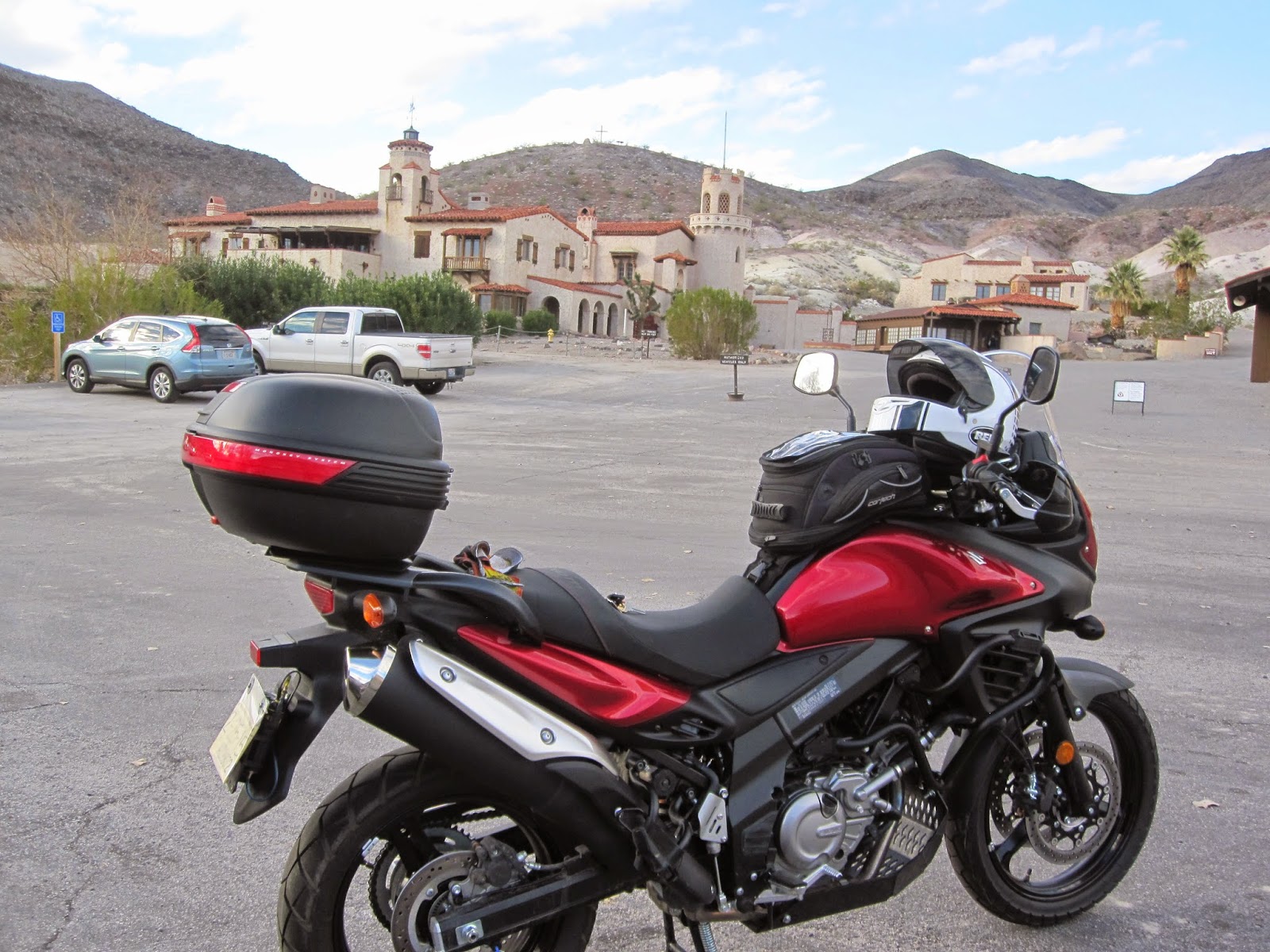 We are soon on our way back to our lodging. 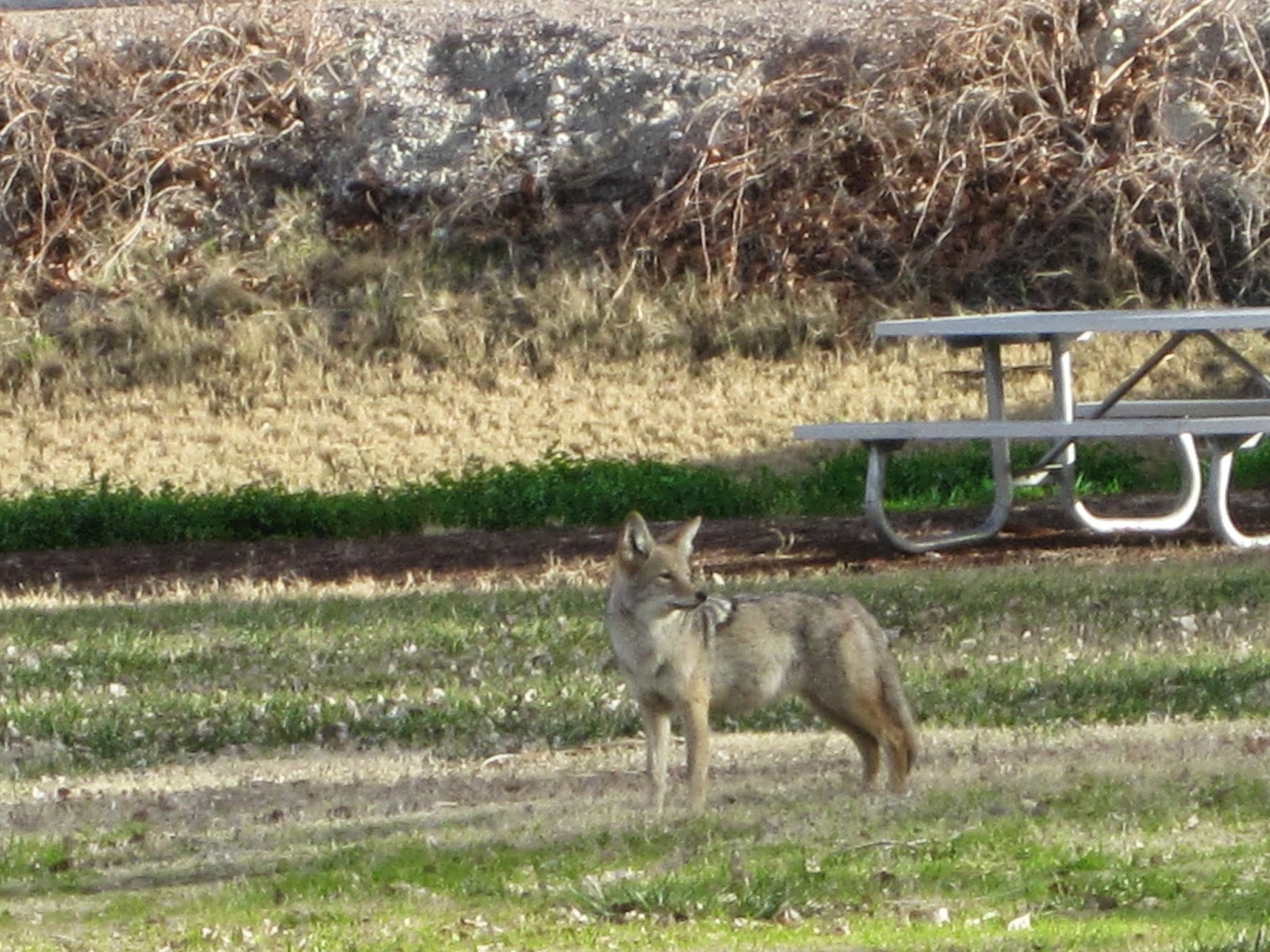 Adrian stops to snap a picture. 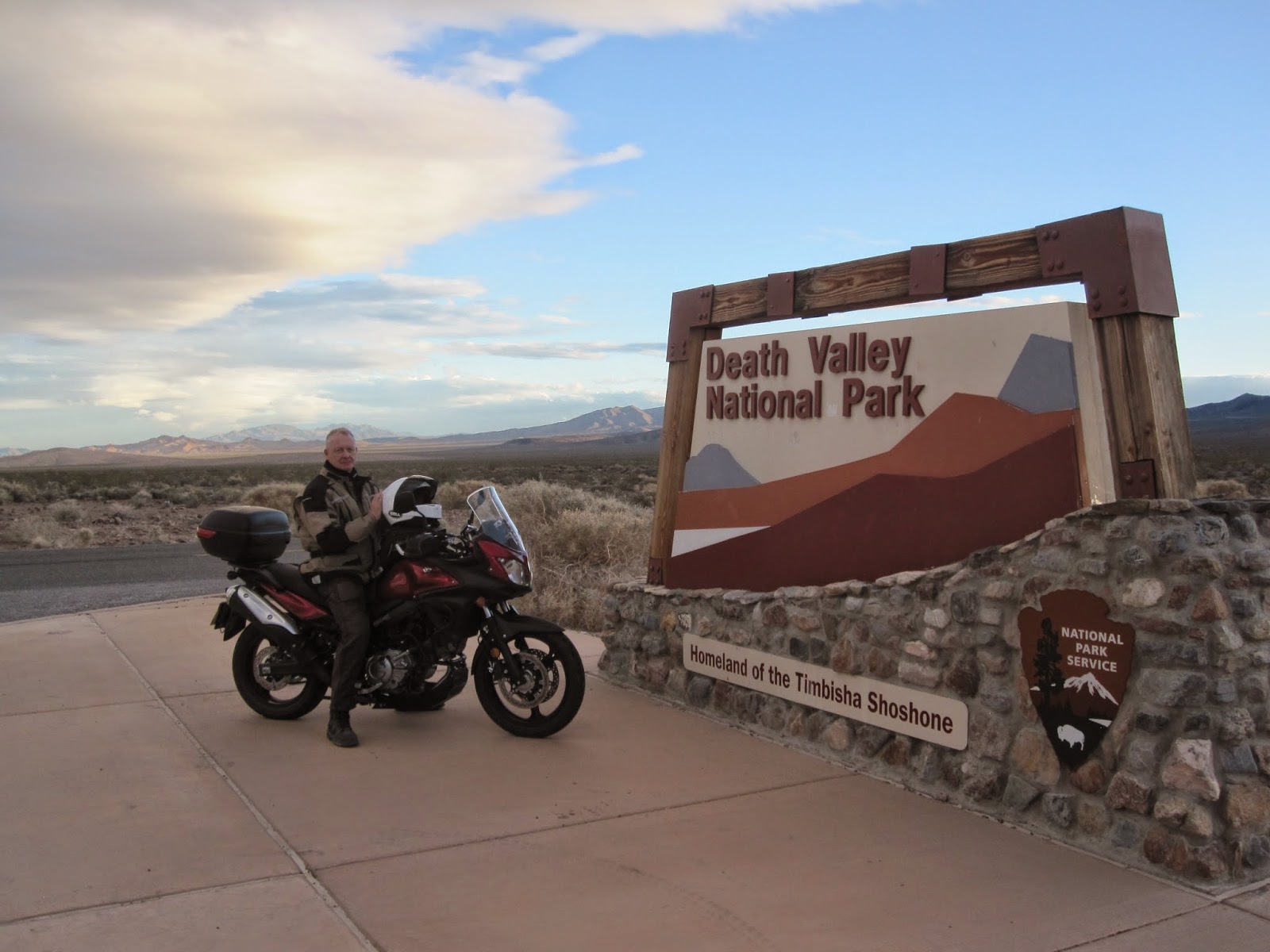 We stop again for quicky gas top off and a pick me up at the Area 51 gas/brothel. 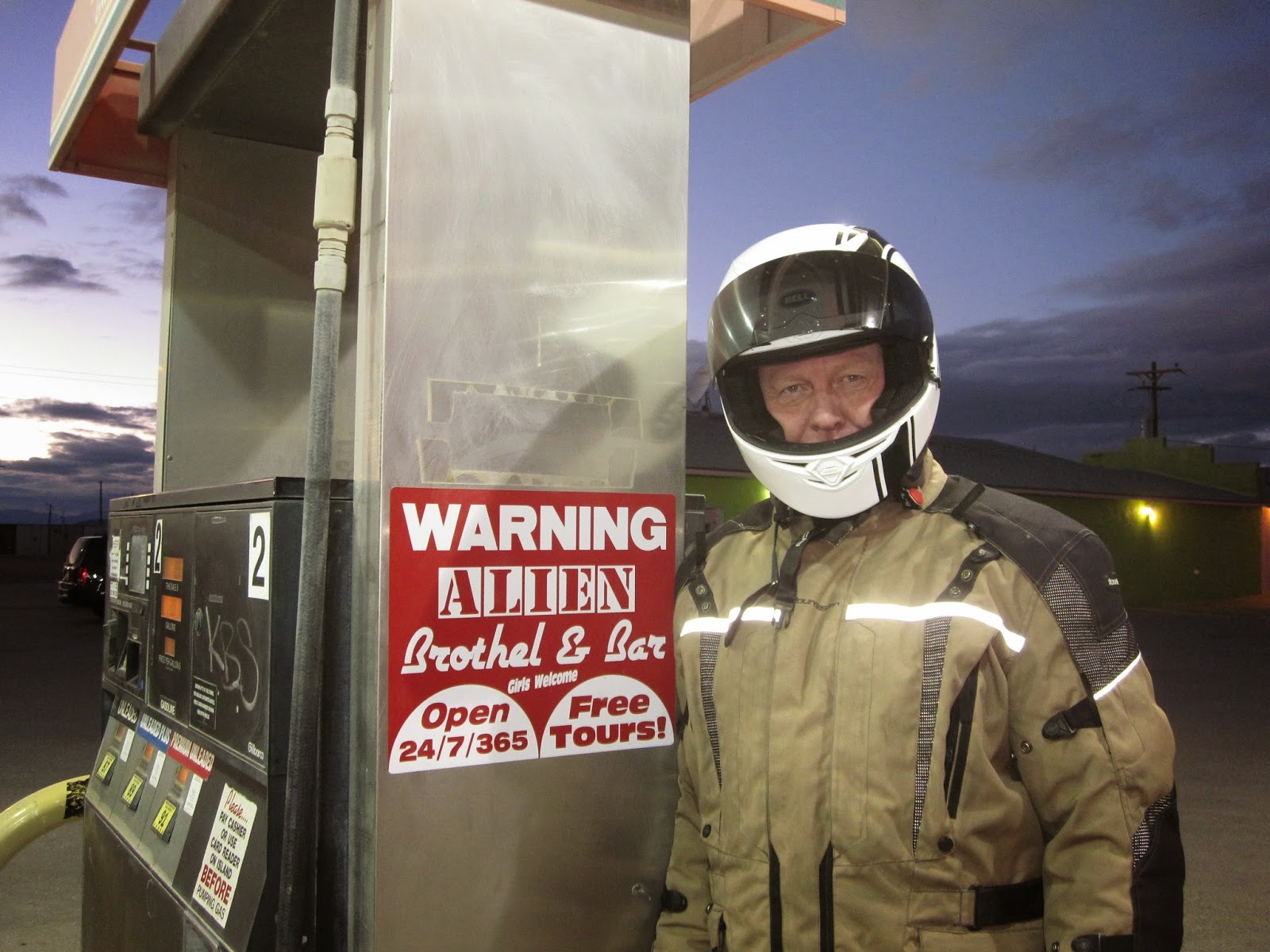 Sunday we ride for home via Zion National Park. Just before the park with take a short side trip up Mesa road. 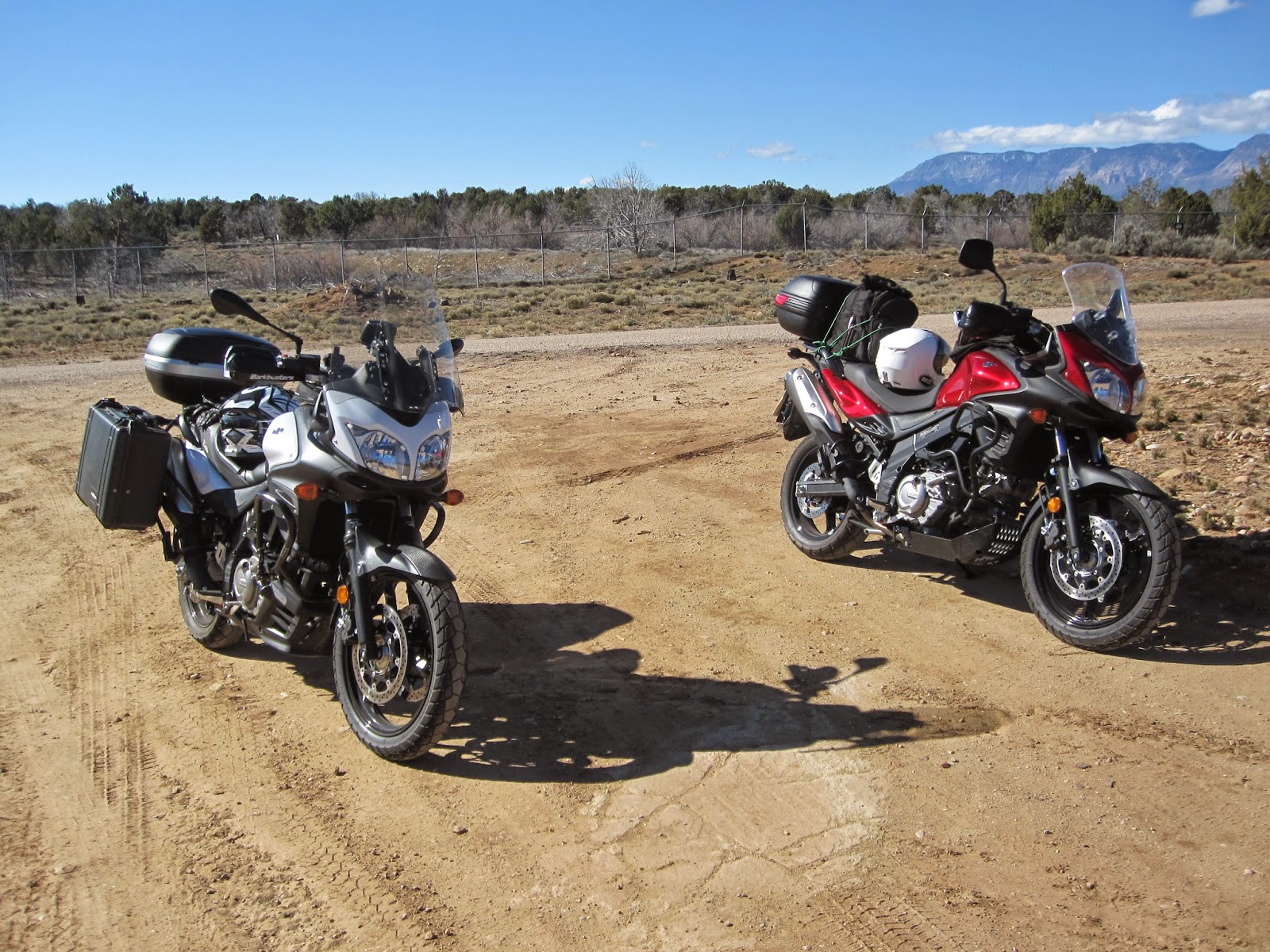 In the park now. 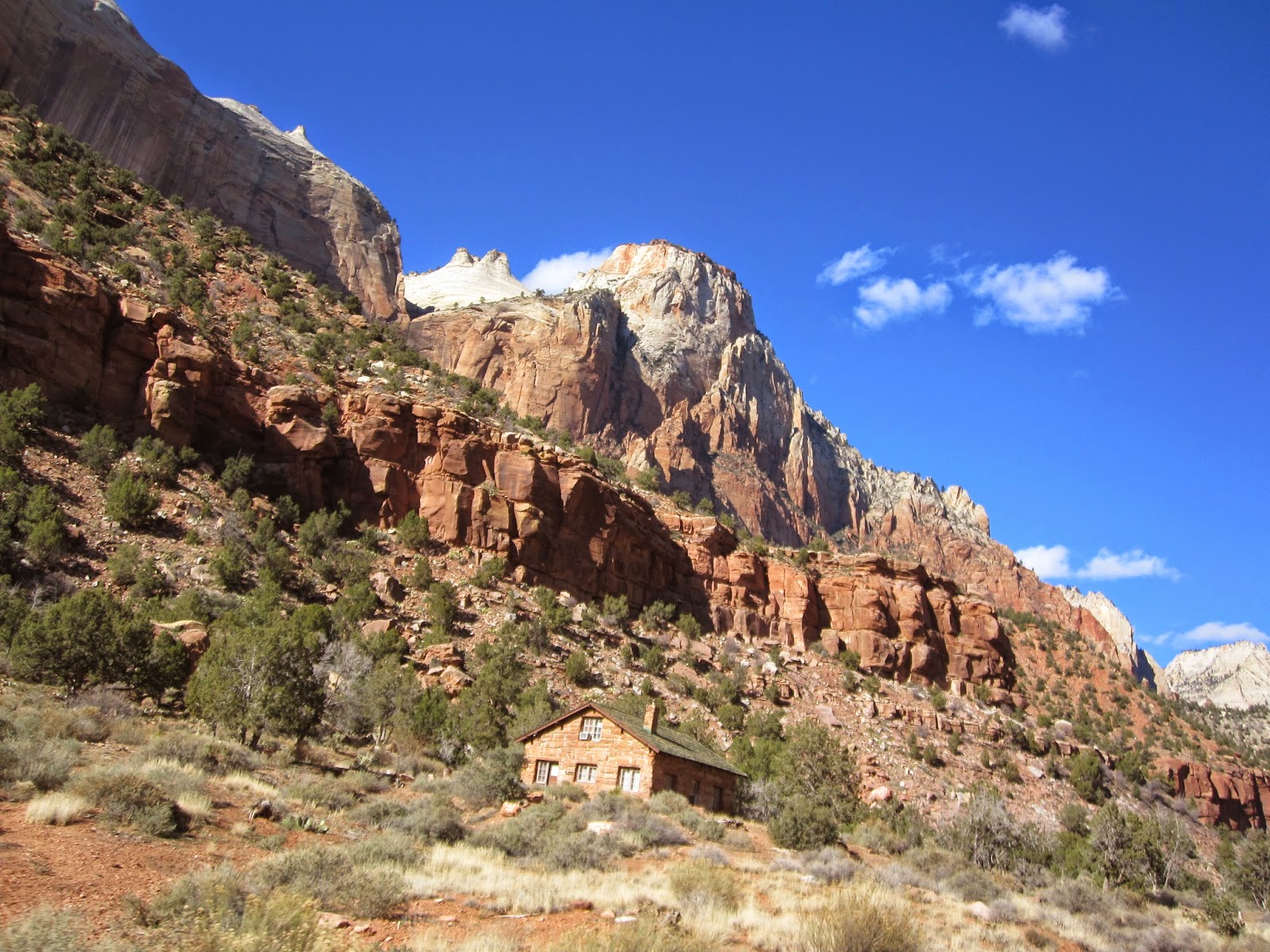 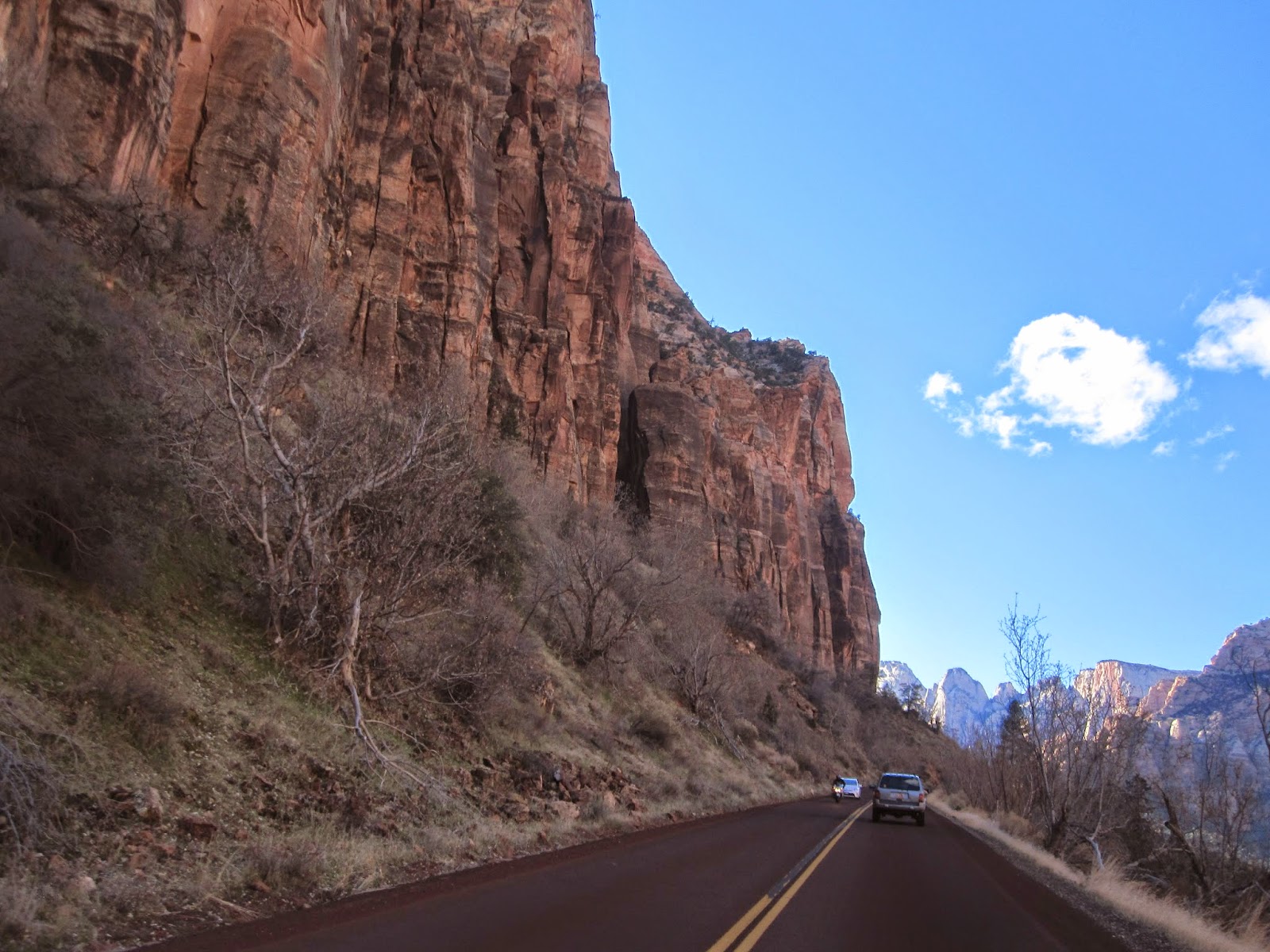 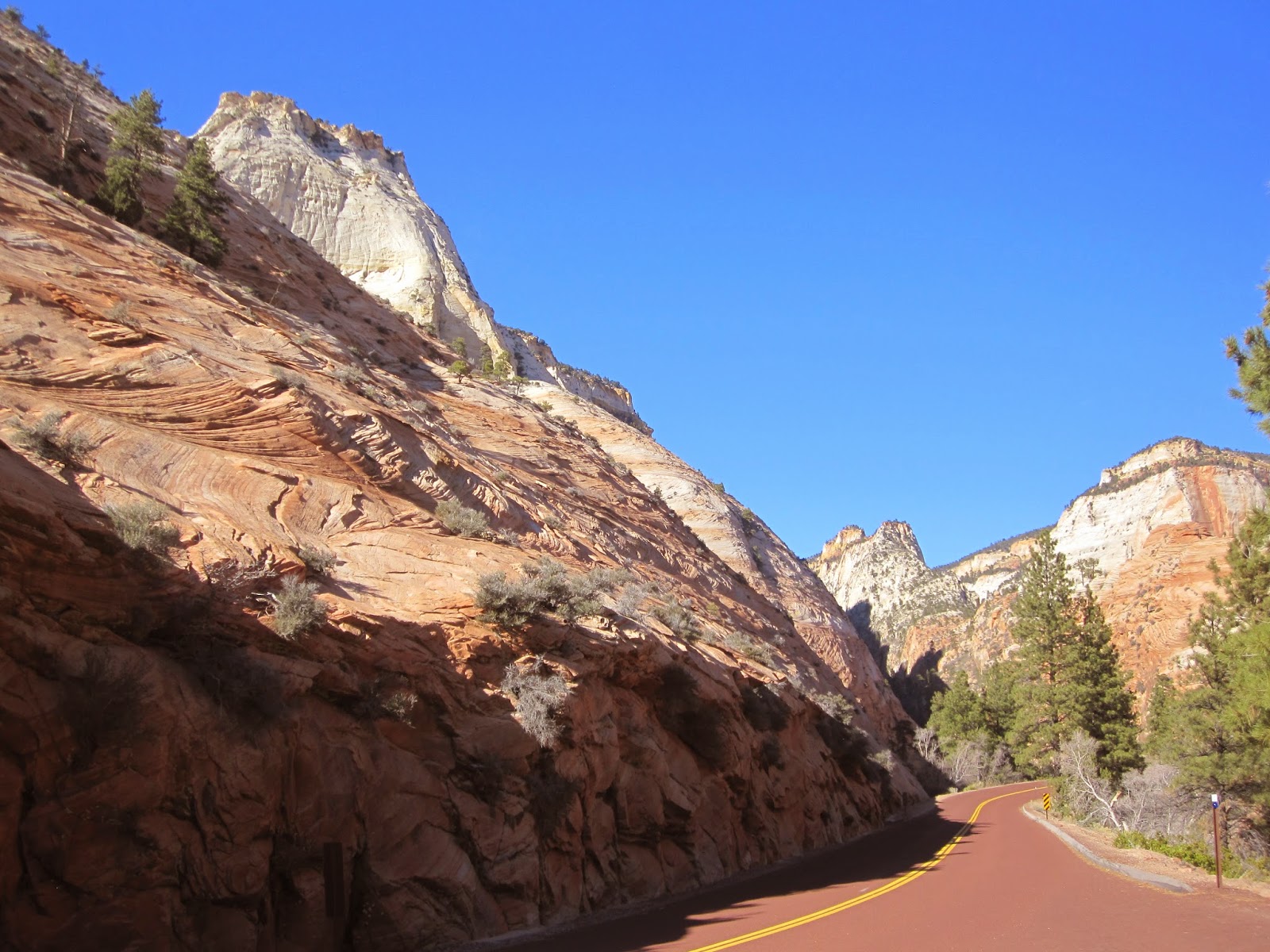 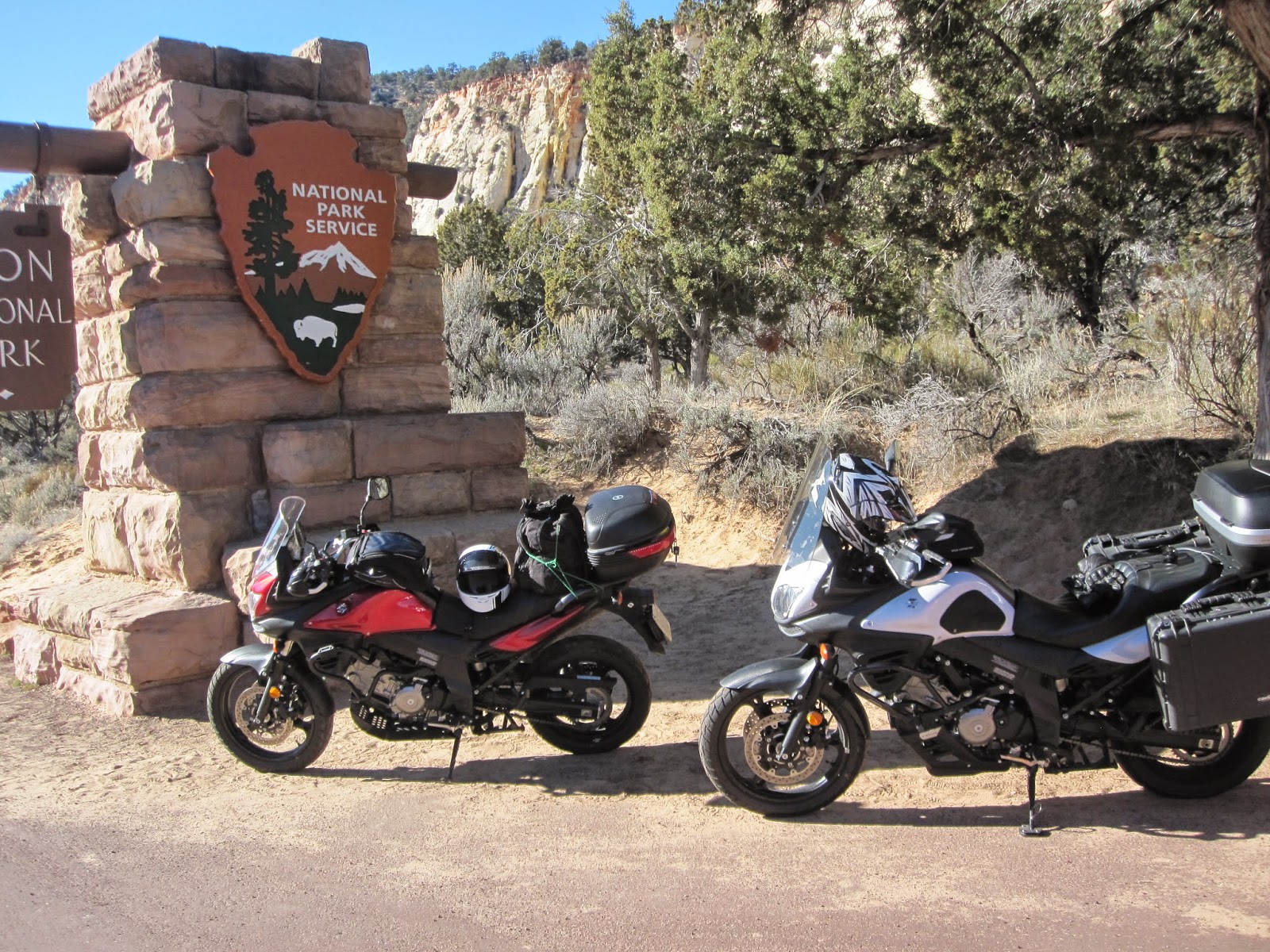 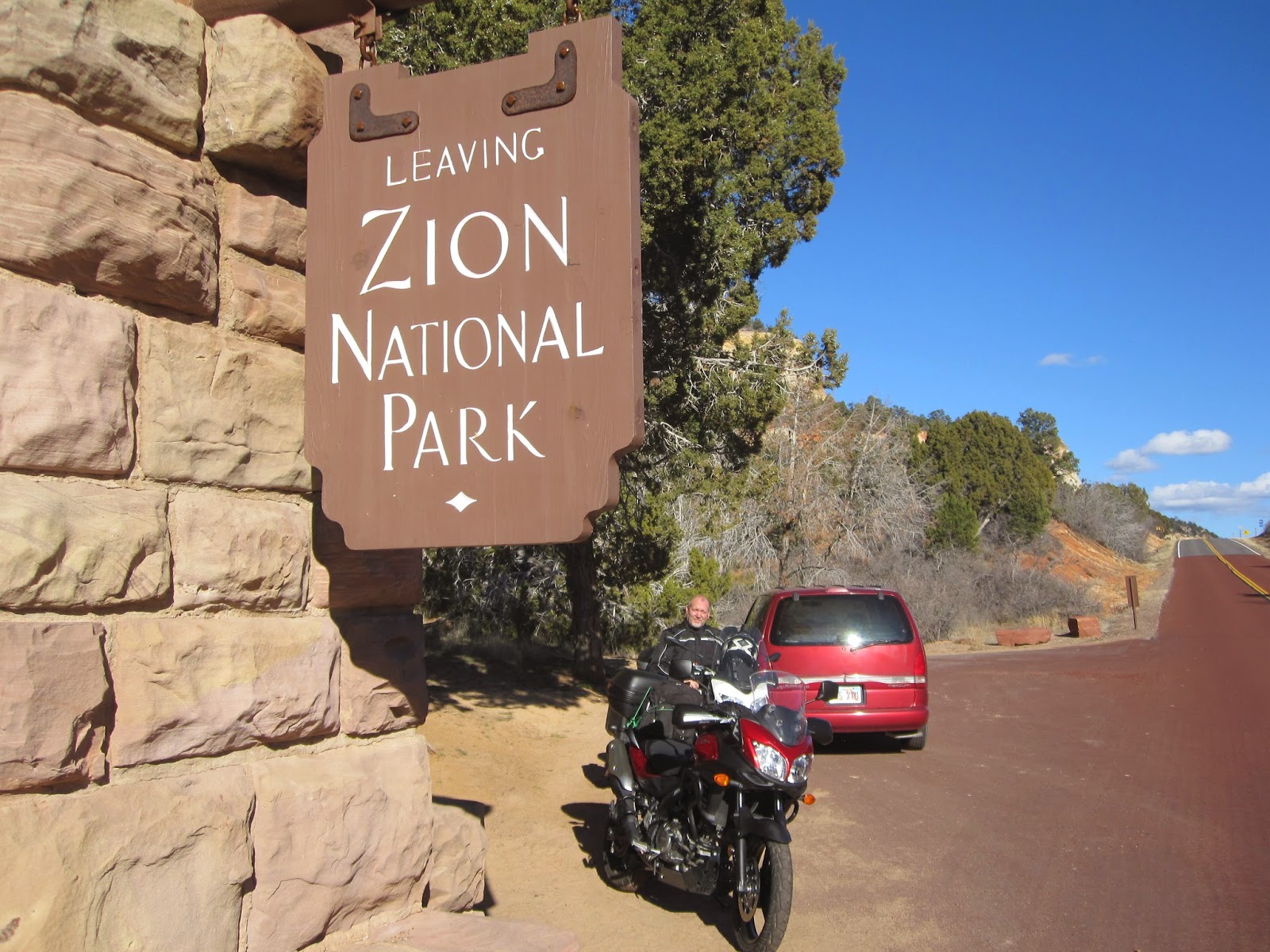 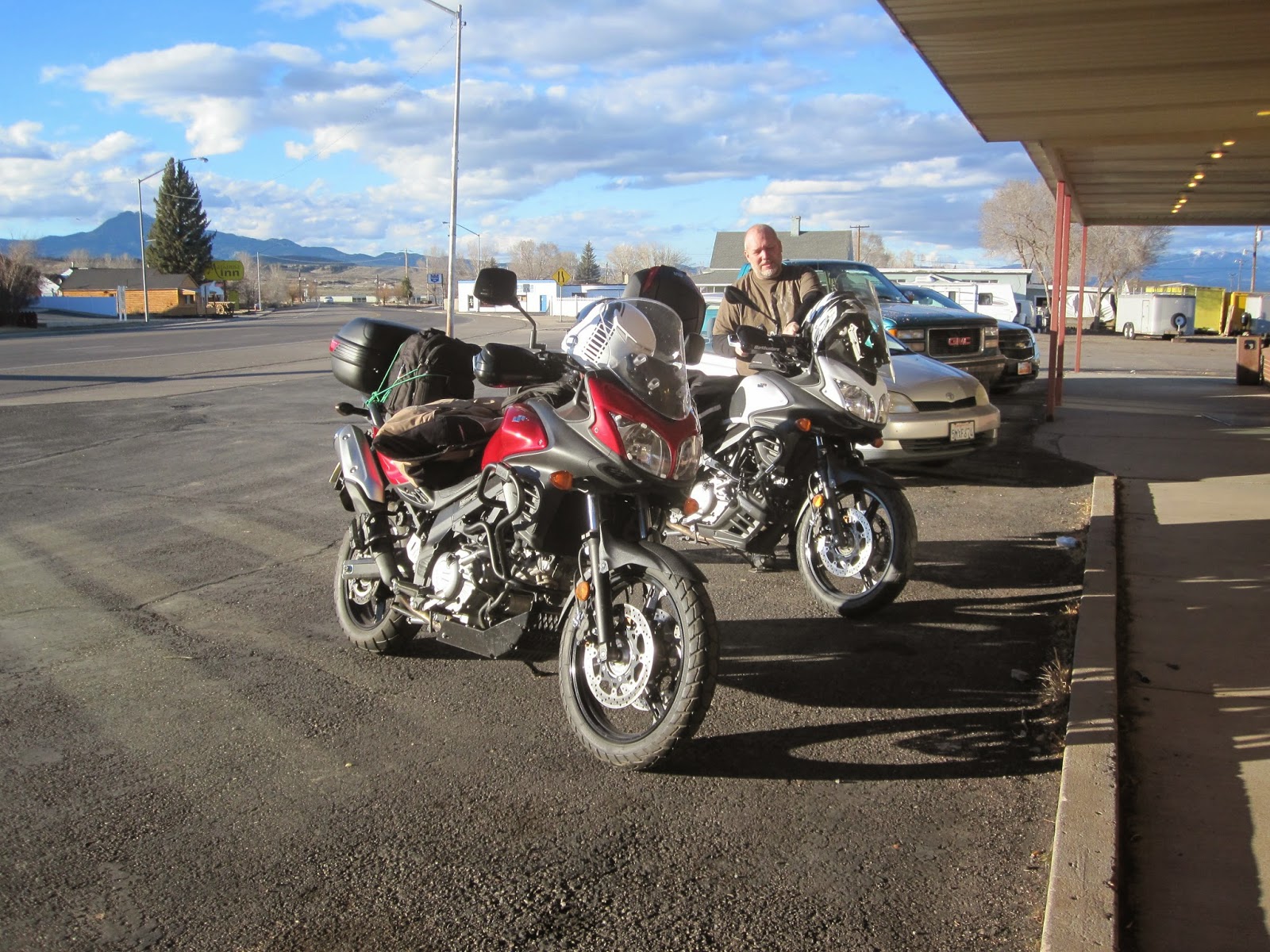 Its getting late, chilly and light is fading. We stop for gas in tiny Marysvale...I started out the day with a headache and it's only gotten worse as the day wore on. I feel like my ability to ride is compromised so I decide to call it a day and get a room, Adrian needs to be to work the next day, but is hesitant to leave me when I'm feeling knackered. I'm able to assure him I'll be ok, and off he goes. Adrian is a hellofarider, a good man and a good friend!

I find lodging here.
As soon as I check in I take the short walk to the only store in town for some juice and maybe some meds. Unfortunately I get to the store at about 5 minutes after 6:00....which is closing time. Damm. I have a water bottle with about 1/4 left and a nut bar, I guess that will have to do.
When I walk back to the motel, the owner comes walking out and asks me if I got to the store in time? When I say no he asks if I need anything, some juice or cookies? I tell him I'd be happy to buy some from him...he disappears into the office and quickly returns with and unopened jug of apple juice and a partial tray of cookies. "Here you go" he says, "How much do I owe you?" I ask, "Nothing" he replies, "thanks for stopping in", and walks away.
Sweet, I have snacks! 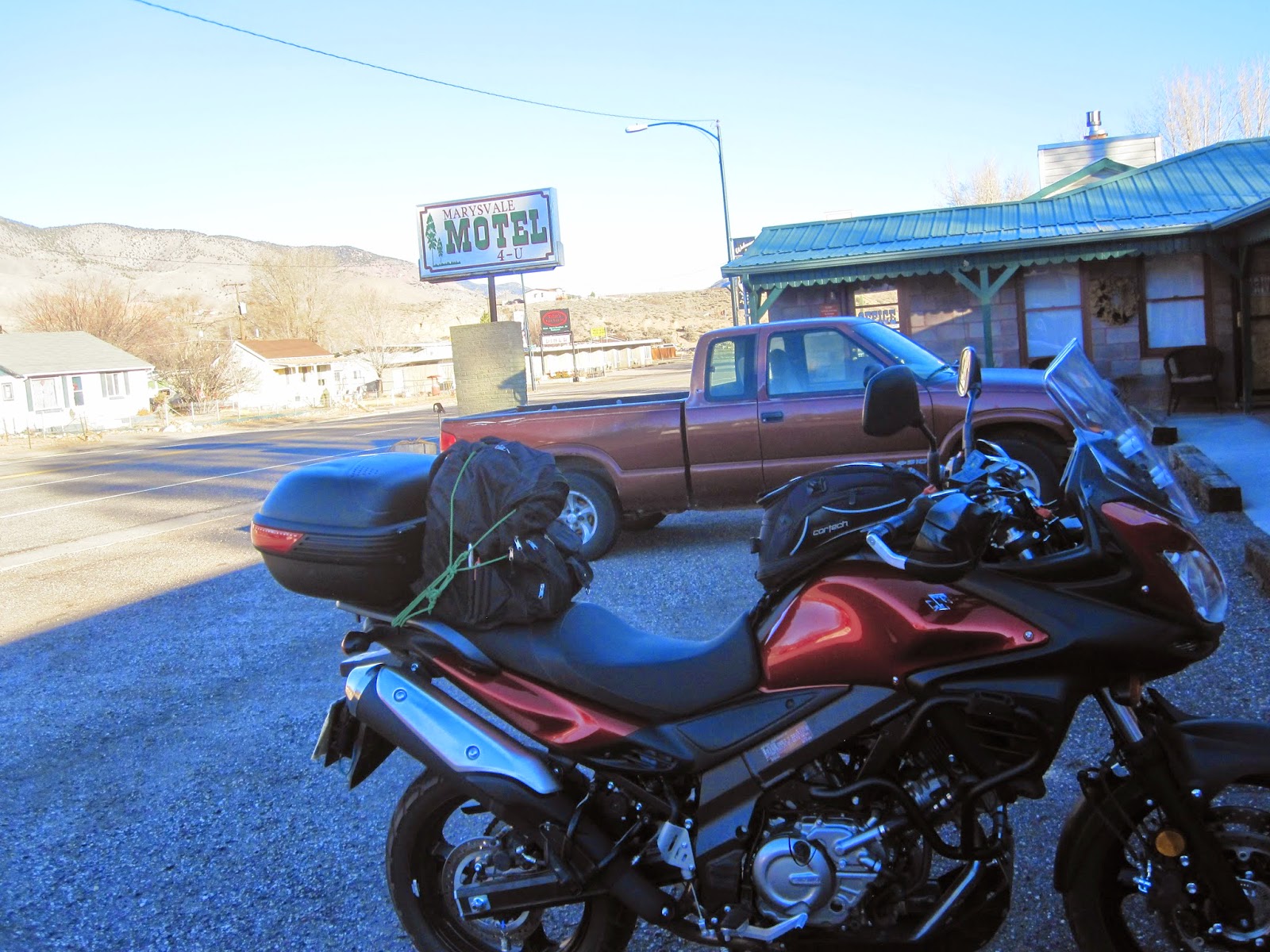 My newly acquired snacks in my very well kept room. 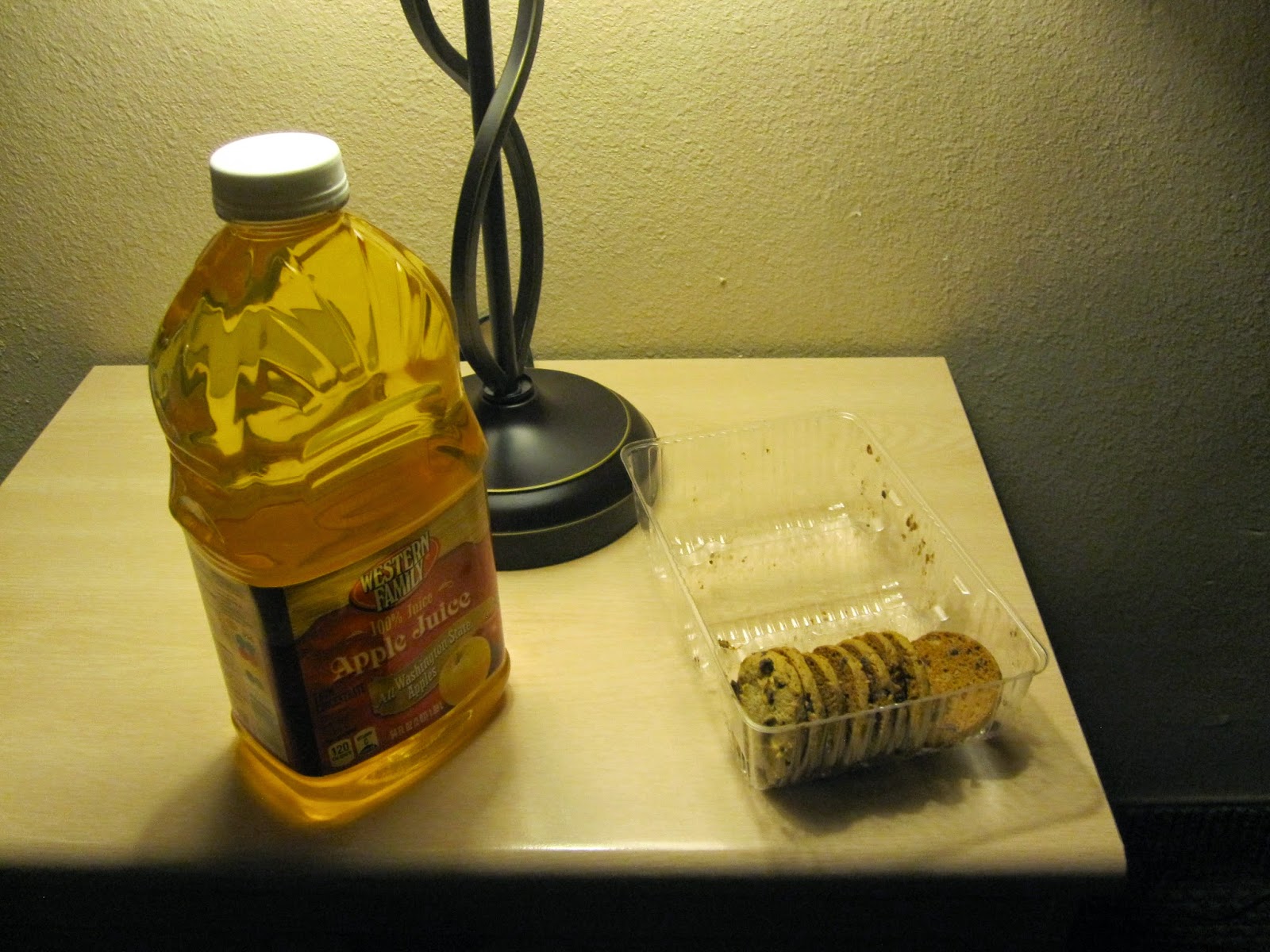 The room is clean and quiet, but I have a miserable night recovering from whatever it is that ails me. (edit to add: the day after I got home I visit the Dr. who puts me on anti-biotics for a sinus infection. No wonder my head hurt so bad...)
At least I had a warm bed, I'm off for home in the morning feeling much better. 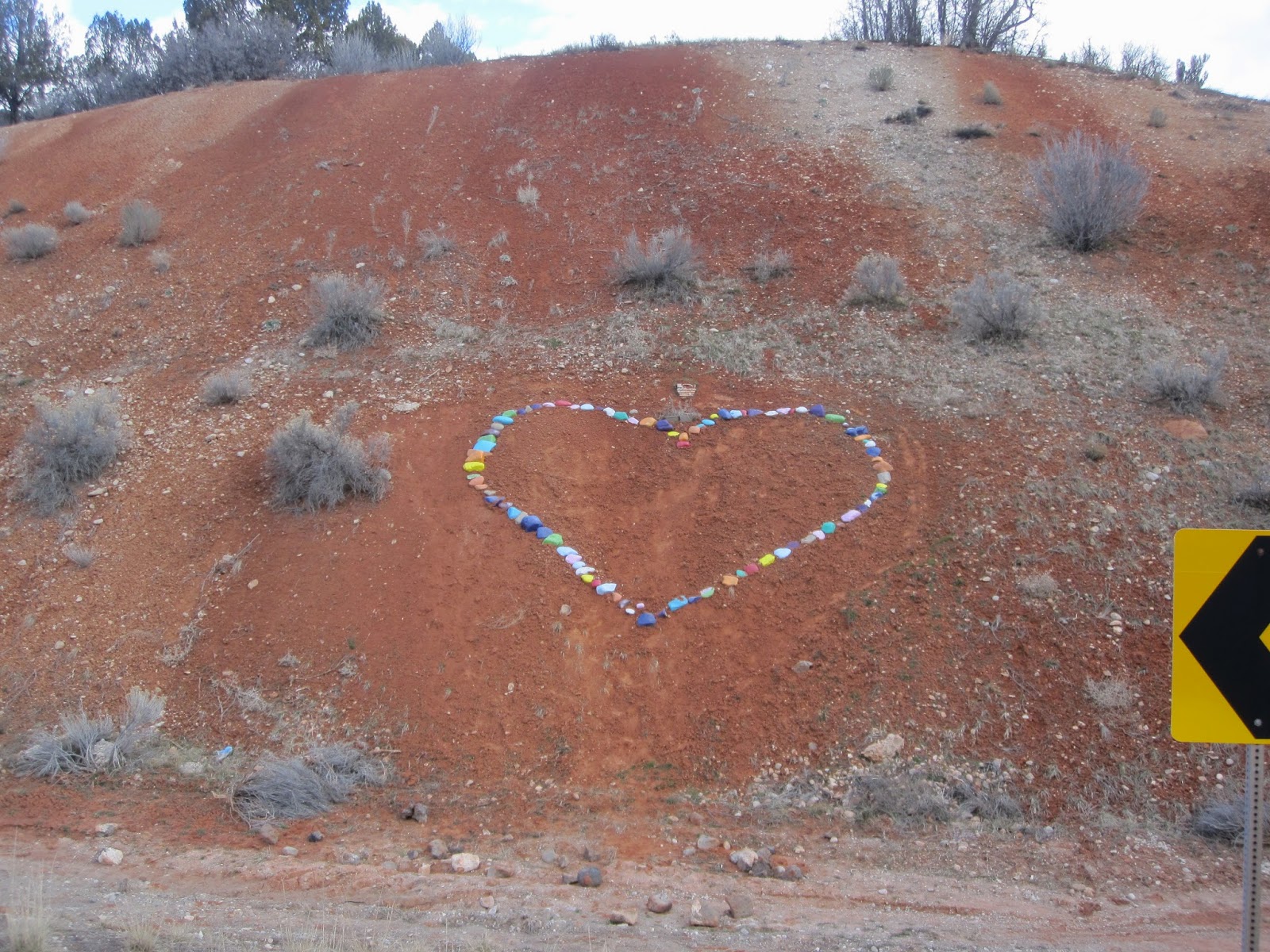 I hit some heavy rain on the way home.....Ginger is no longer a virgin. 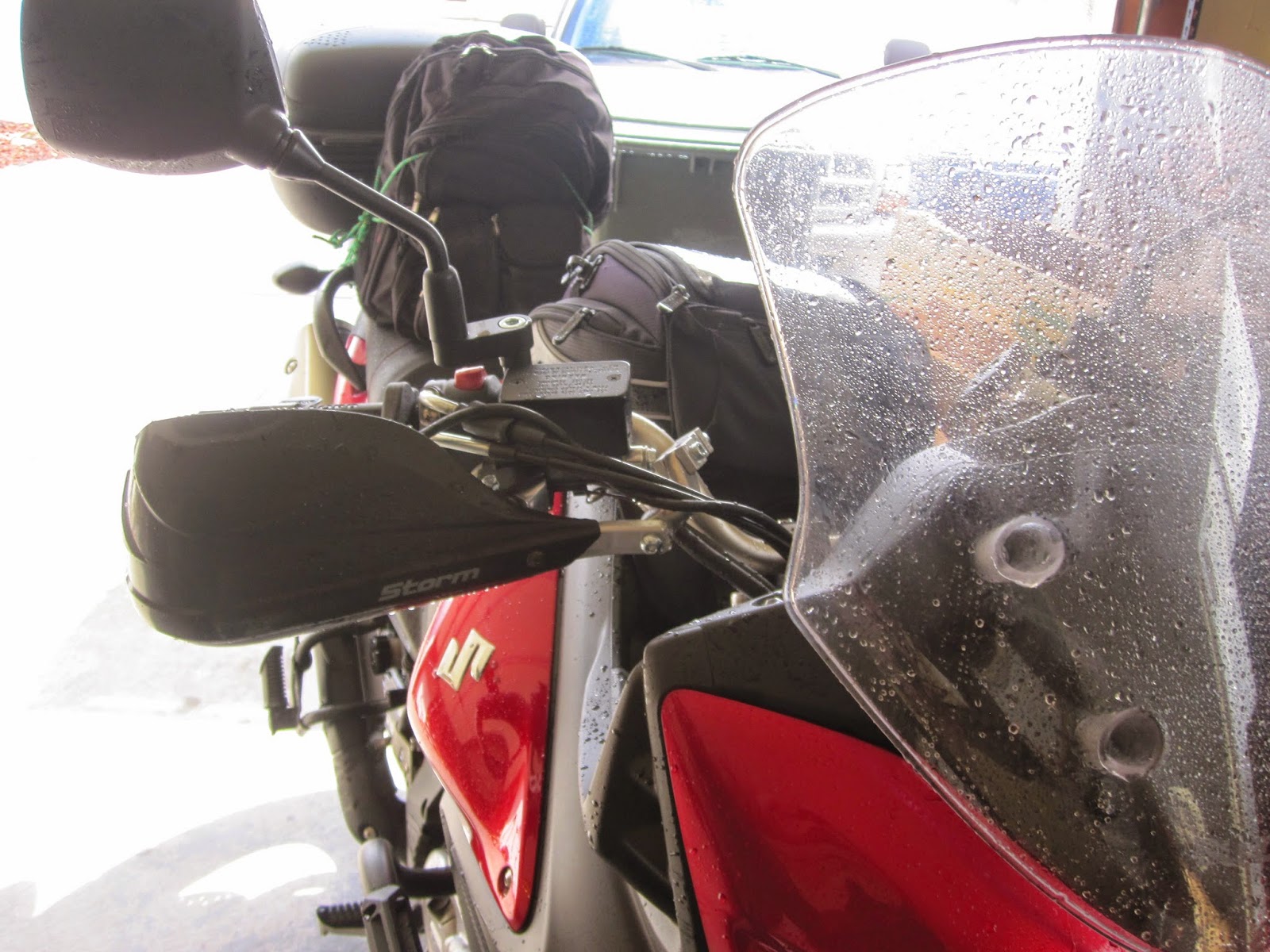 Great Ride wish I could have followed!

Sweet looking new ride. Great name. I like the fact she is a true ginger, lol.

Glad all ended well with your ride and the motel took care of you with the juice and cookies.

Mike - Its to bad you G-door was broke, we would have loved to have you along.

Tro - Haha...thanks for picking up on the Ginger thing! :)

Thanks to you all for reading!